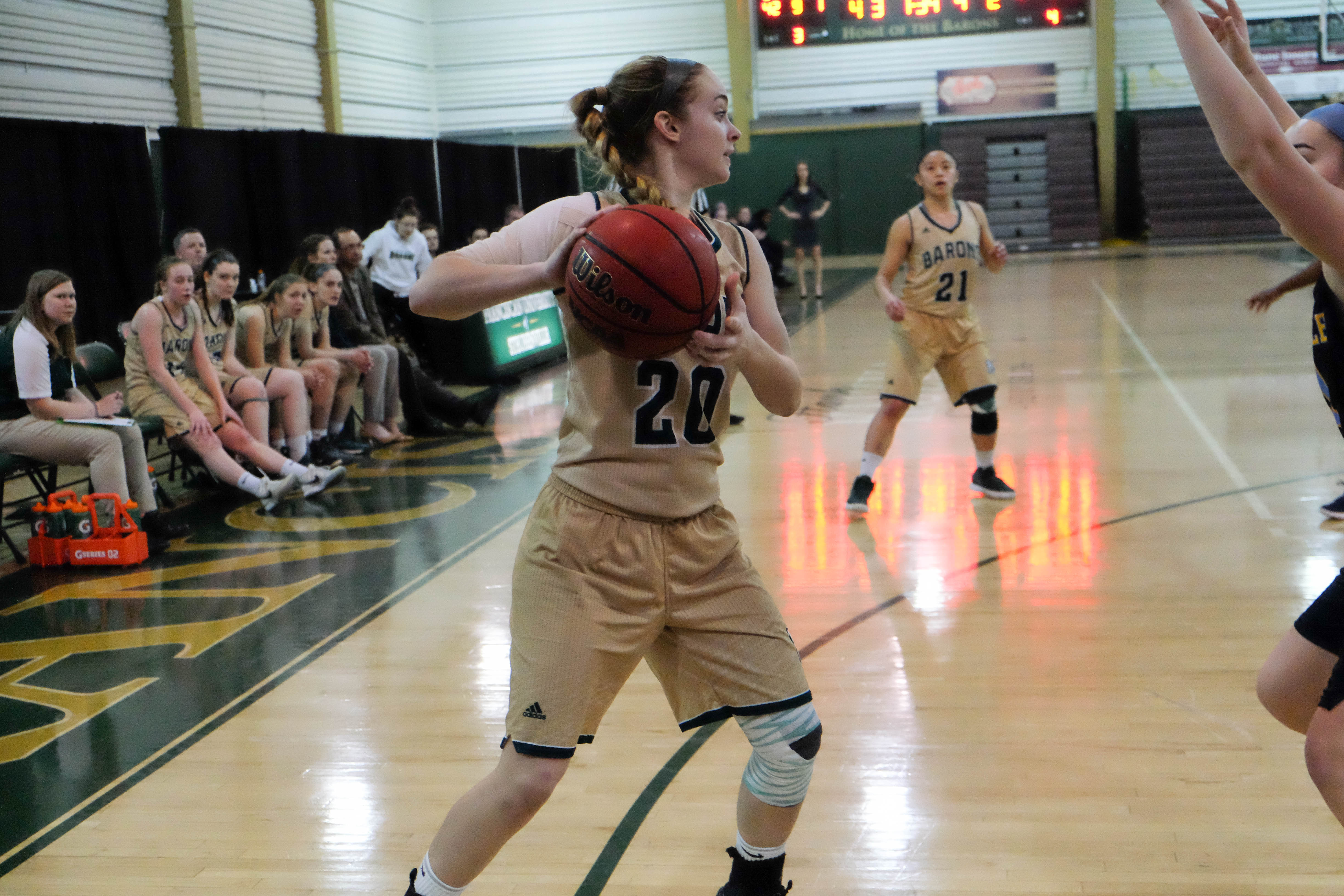 The Franciscan University women’s basketball team finished its season on Saturday, with a 62-28 loss to conference opponent Medaille College.

Early turnovers kept the Lady Barons off the scoreboard in the game’s opening minutes, despite solid defensive stops on their own end of the floor. At the 7:34 mark of the first quarter, Medaille launched what became an 8-2 scoring run, finding gaps in Franciscan’s zone defense.

Junior guard Reagan Stead then cut Franciscan’s deficit in half, burying a deep three off the assist from sophomore guard Abby Baierl. Baierl registered a steal on Medaille’s next possession, before junior point guard Gaby De Jesus dished to Stead for her second successive three, tying the score at 8-8.

Medaille would respond with a three-pointer on their next possession with just under four minutes to play in the first quarter at the onset of a massive 18-3 scoring run to conclude the quarter. The Lady Barons would benefit from Stead’s third three of the opening quarter but would otherwise find offensive opportunities limited by turnovers and errant jumpers.

Determined to help minimize what became a 26-11 deficit after the first quarter, freshman forward Laura Salzmann responded to Medaille’s opening jumper of the quarter with a bucket of her own, off a timely assist from freshman guard Rebekah Nevarez. An eight-point Medaille scoring run further established the Mavericks’ lead, broken by a Salzmann jumper with only 1:31 remaining before the half.

The Lady Barons couldn’t convert another Baierl steal into points and left the court for halftime down 36-15.

Sophomore guard Kaitlyn Sonneberger contributed a ranged jumper after Medaille opened the third quarter with three points of their own; the Lady Barons would score only one additional bucket in the remainder of the quarter, a contested basket from the hands of De Jesus. Medaille would add 13 points of their own, sinking two free throws at the conclusion of the quarter to put the Mavericks up 49-19.

Stead landed a three-pointer with 8:58 remaining in the fourth quarter, three of her 14 points on the game, before sinking the second of two free throw opportunities with 8:01 remaining. Down 54-24, Baierl converted a Stead assist into a deep jumper, before Medaille responded with a three. Baierl landed the Lady Barons’ final basket of the game with 1:13 remaining, before the final buzzer put a 62-28 loss into the books for Franciscan.

The Lady Barons finish their season with a 1-22 record, in Head Coach Suzy Delaney’s fifth year.

The young team will graduate no seniors, a testament to the prospective growth still to come for a squad looking for future AMCC success.

2018-02-27
Previous Post: Fine Arts Column: What is art? (Or Pittsburgh for that matter?)
Next Post: Letter from the Editor: Lent as a spiritual springtime