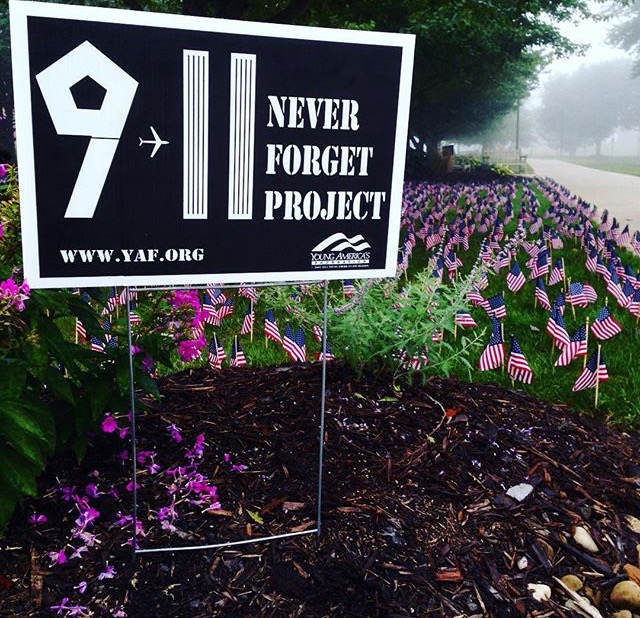 In preparation for the memorial of Sept. 11, 2001, Franciscan University’s Young Americans for Freedom club gathered late Thursday night to plant a garden of 2989 flags in the St. John Paul II Library courtyard for each soul lost in the terrorist attacks 14 years ago. The anniversary of these attacks is now known as Patriots’ Day.

This flag remembrance is just a single cry among the roar of thousands of American citizens, who solemnly revere those souls and hope that this great tragedy of America might not be lost in the folds of time.

It seems inevitable that the true importance of 9/11 is in danger of becoming lost within a few generations.

Tommy Valentine, Young Americans for Freedom co-president alongside Samantha Martinez, said, “It’s important not just to remind ourselves, but to not let the memory die … (to) stay reverent.”

Memory is a fragile thing yet it is simultaneously one of the single most important things to Americans. It is the memory of these poor souls that keeps not only the event itself a centerpiece transfixed in time but also the American way remembered. It is a reminder of what Americans as a people hold in the highest regards. 9/11 is a day when Americans come together as a people to remember their own.

It is in this recollection of their own that Americans call to mind themselves as a people. The histories and myths of the American way unfold and are brought to light in the beauty of this memory. They recall the people and the country in which those souls worked and died. As students pass by the memorial on 9/11, they remember the souls.

“I was in kindergarten,” said Martinez. “Everyone above me has memories (of 9/11). My class has hazy memories. The class under me had no recollection.”