A quest of faith and a flag: Gibraltarian students tell their stories, provide perspective on American and Franciscan culture 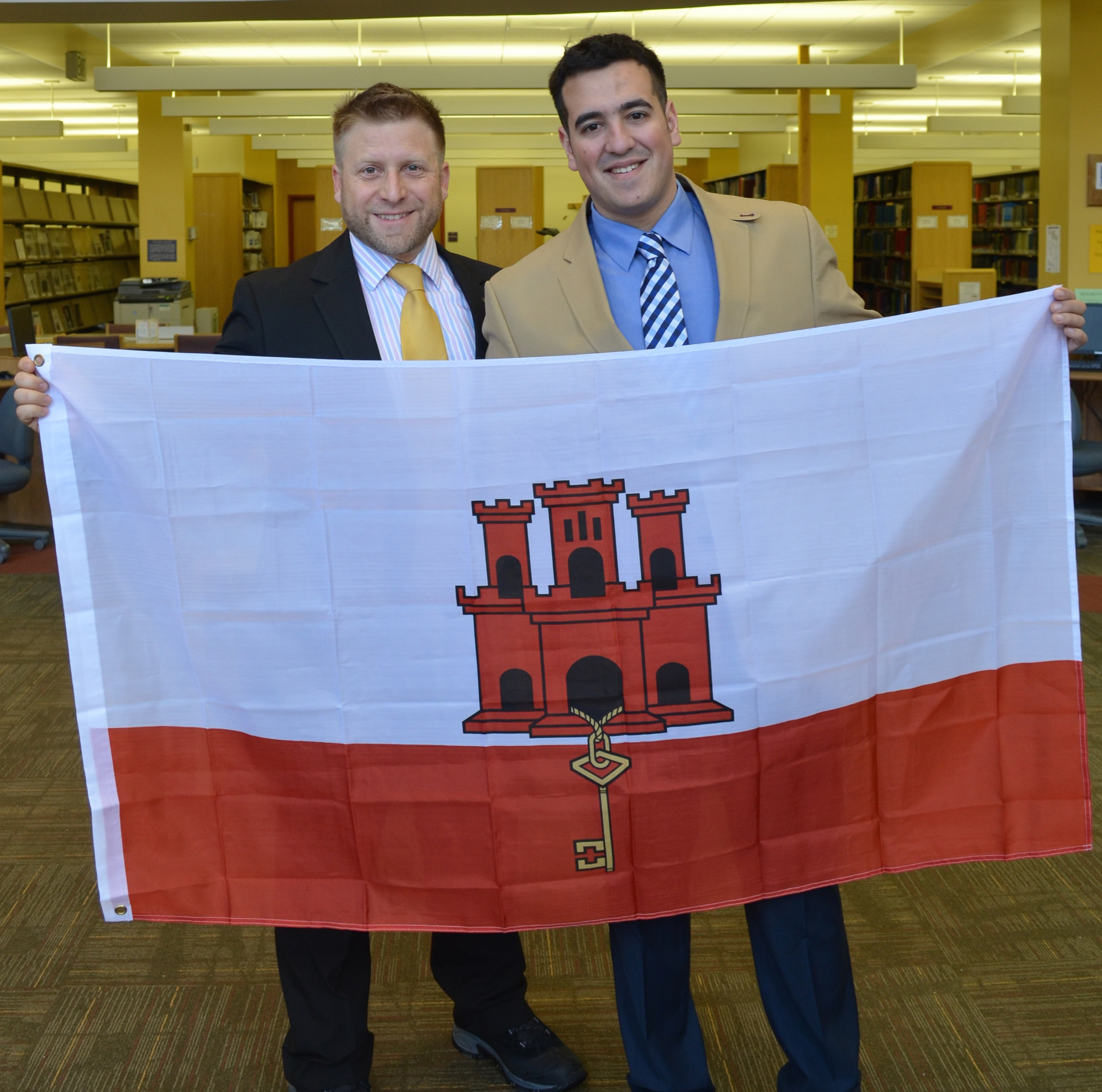 Walking through the doors of the St. John Paul II Library, one of Franciscan University’s first Gibraltarian students looked at the array of flags hanging above him and asked, “Where is my flag?”

Through the initiative of Jeremy Duo and Christopher Cortés, the first Franciscan students to represent the tiny British Overseas Territory, the Arms of Gibraltar that adorn the nation’s red flag now joins 54 other countries’ flags that represent international students who have attended Franciscan University.

“(Gibraltar) is difficult to describe…and I would rather not because I don’t want to offend anyone else who thinks differently,” joked Cortés about his homeland.

Gibraltar is an outcropping on the southern tip of Spain. It is only three miles long and three-quarters of a mile wide with a population of just under 30,000 people. To put it into perspective, Gibraltar is a little more than twice the size of Steubenville.

Duo, who has known Cortés his whole life, was the first to make the leap of faith and join Franciscan’s campus in the fall of 2013. At the guidance of a family friend who is a cloistered Carmelite nun in Spain, Duo became the first Gibraltarian to study at Franciscan University where he is double majoring in theology and catechetics.

Originally, Duo was studying digital music at a university in South Hampton, England, but after a year, his “reversion” to the Catholic faith began.

“I started to read more … (I became) enthralled about learning about the faith,” said Duo. “It all started to make sense. I (gladly) fell into apologetics.”

He began to apply to different universities that offered theology and was accepted to Maryvale Institute, an international Catholic distance-learning college in the United Kingdom. But, through the advice and assistance of his cloistered Carmelite friend, Jennifer, Duo dubiously agreed to apply to Franciscan University.

“I knew about Franciscan, but it was never in my mind to actually go there,” he said about his uncertainty concerning this new direction. “The first time I logged into the website, you just see the massive slogan in your face ‘Academically Excellent, Passionately Catholic.’ … I didn’t care about the academics, just (about the) ‘passionately Catholic.’”

At that point, Duo admitted that even though he doubted, he thought to himself, “If the doors are open, I will walk through them.” And after a few months of applications, meetings and much assistance from behind the walls of the Carmelite convent, the last door was opened for him.

The story of Duo’s lifelong friend Cortés is a little different. Before coming to Franciscan, he had been a school teacher of children ranging from grades K-12 for about 16 years and was in need of a sabbatical.

When deciding what to do with his sabbatical, his spiritual director suggested that he get a master’s degree in education from Franciscan University, to which Cortés responded, “I would rather be a vagabond.”

In the end, Cortés set his mind on continuing his education and said, “What the spiritual director says, the guy does.”

He became a full-time student on campus in August 2014.

“It took me ages and a couple of miracles, but I was given a place here; I was given a grant and time off, which for a person at my point in mid-career is quite peculiar in Gibraltar. … I just up, got my stuff and came over.”

Once Cortés discovered that his nation’s flag was not included in the display of flags in Franciscan University’s library, he contacted his father who is active in the church and in politics in Gibraltar. His father then brought Cortés’ request for a flag before their chief minister.

“The chief minister said that because Franciscan was taking such good care of Jeremy and Chris, ‘we have to send them something,’” recalled Cortés.

The chief minster then wrote a letter to the Rev. Sean Sheridan, TOR, president of Franciscan University, to accompany the flag that he personally sent.

Both Ron McNamara, coordinator of Student Leadership Development, and Juliana DeLuca Daugherty, director of Orientation and International Students, played a large role in helping Cortés and Duo hang their flag in the library.

“The more students that come to (Franciscan University) that are represented there,” said Cortés, pointing up at the flags hanging in the library, “the more we realize that Christ is for all, and we are all part of the Body of Christ. … We can chuck our political views out the window, and we can all lean down in front of the Blessed Sacrament and say, ‘amen.’”

Duo agreed. “The reason we are here transcends political barriers,” he said.

Joining Franciscan’s campus thinking that the United States would be as Duo said, “just like the movies,” both Duo and Cortés admitted that there are things that they both love and hate about the Franciscan and the American cultures.

“I find Americans to be extremely different than (Gibraltarians) are, not in a bad way necessarily,” said Duo. “I find that Americans are very nice people on the surface area … but it also takes a huge amount of time and effort to get into the real person of an American. They are so closed, generally speaking. … Here, you will meet someone, you will chat with them for 15 minutes, and then tomorrow you will walk by them, and they will look at you and just keep walking.”

When asked about the Franciscan culture, Duo said that the “elite standard of faculty” on campus “blow my mind” everyday during class, yet at the same time, “you have a university which, in the classroom, teaches one thing and then in practice does something else.”

He continued to explain how sometimes the “over-zealousness of some people … can be a pitfall to the faith on campus. … You have a different kind of peer pressure here. … I think also the Franciscan charism can sometimes have too much of an effect on lay students. People who are going into the vocation of marriage and they are living like a religious. … To be married is to be in the world. Not to be of the world, as St. Paul says, but to live in it.”

Duo continued, “I’ll go to a (Festival of Praise); I’ll raise my hands and do all of that, and it is great … in the context of a FOP. But I think it gets confused with what really matters. I think the faith becomes all about the affection of the heart rather than the objective grace from the sacraments.”

Cortés added that the best thing about Franciscan University “is the fact that the Blessed Sacrament is on this campus.”