Altoona proves too much for Franciscan down the stretch 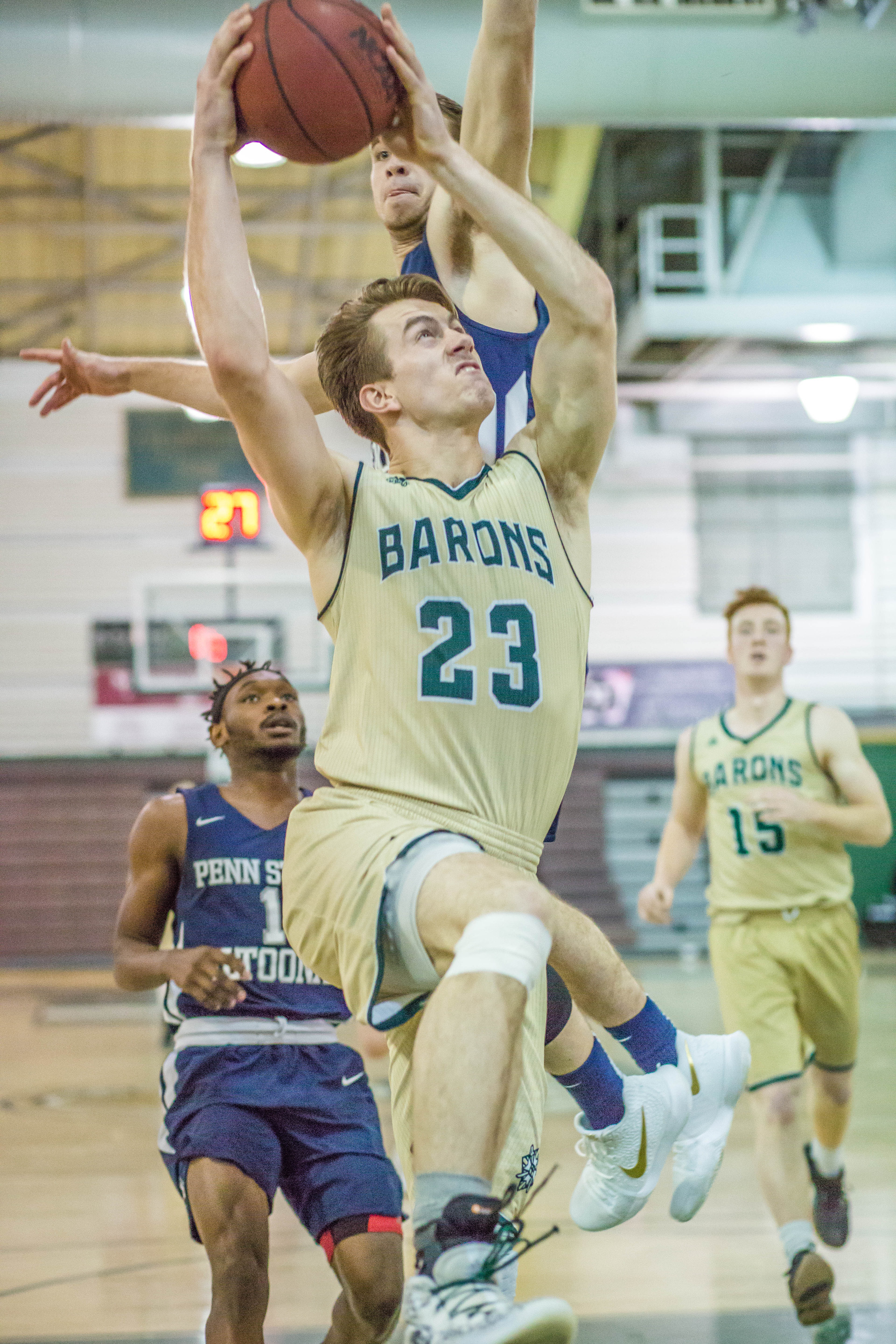 A late first half run proved too much for the Franciscan University men’s basketball team to overcome down the stretch, as they fell 78-63 to visiting conference opponent Penn State-Altoona on Wednesday.

Senior center JP Dombrowski started the scoring for the Barons, knocking down a contested jumper well into the lane to put Franciscan up 2-0. A deep three from senior guard Keoni Sablan gave the Barons back the lead minutes later, after Altoona found penetration into the lane.

Down four with 15:15 left to play in the first half, Josh York took a defensive rebound the length of the court for a layup, cutting the Altoona lead in half. Sophomore forward Joseph Schriner gave Franciscan back the lead a little more than a minute later, knocking down a jumper from the right baseline while falling to the floor on a hard foul. Schriner connected on the free throw, capitalizing on the back end of his three-point play.

A layup from sophomore center Matt Trent, whose scoring capacity would come alive in the second half, stretched the Barons’ lead to four.

Still tied with 5:24 remaining before halftime, the Barons found themselves victims of well-timed Altoona offensive dominance. The Lions launched an 11-point unanswered scoring run, characterized by five free throws and three layups in the lane. Missed shots and multiple turnovers from Franciscan’s end of the court helped spur the Altoona scoring streak.

A Dombrowski layup with 1:41 remaining in the half severed the Lions’ scoring streak, but Altoona answered with a layup of their own before the halftime buzzer sounded. Both teams headed to the locker room, with Altoona nursing an 11-point lead, one accrued largely within a five-minute span.

After performer Clarice Orteza dazzled the audience with her baton-twirling expertise, the teams retook the floor for the onset of the second half. After an early basket from freshman Sean Hickey, assisted by fellow guard Aaron Foldi, the team fed dominant sophomore center Matt Trent, whose jump shot from beyond the free throw line at the 17:02 mark in the second half comprised two of his 20 points in 21 minutes played.

Another Trent layup with 15:35 remaining and a York shot with 14:47 left to go were together still not enough to eat into a 13-point Franciscan deficit. At the 6:30 mark, Hickey nailed a three-pointer, this time to bring Franciscan within 14. Junior forward Juwan Perkins put his height to full use on back-to-back scoring opportunities, a layup and jump shot respectively, though Altoona responded with five points during the same span.

After scores from Trent and York, Sablan found himself wide open near the left corner and buried a deep three with less than two minutes remaining. Schriner halted a six-point Penn State scoring run with 36 seconds remaining, and Hickey took a defensive rebound the length of the floor for a hard-fought layup before time would expire.

The Barons fall to 4-16 on the season, while Penn state-Altoona moves to 13-7. The home squad will next take to the courts on Feb. 3 at 2 p.m. for a showdown with Hilbert College on Kuzma Community Night.

2018-02-06
Previous Post: The man among the masks
Next Post: First half scoring not enough for Franciscan against Altoona