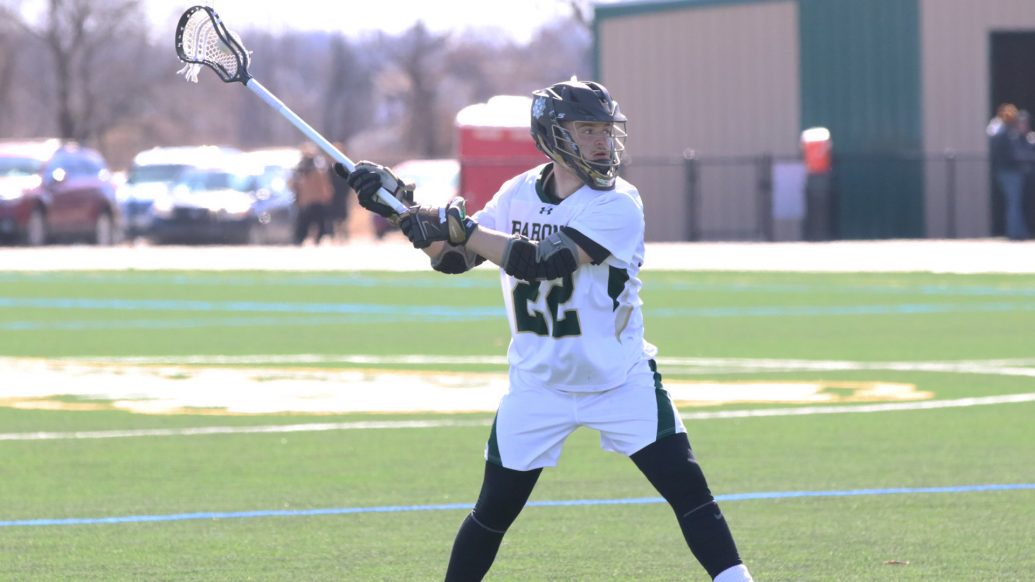 The Franciscan University of Steubenville men’s lacrosse team had to bear a lot of difficulty during the 2020 season, as did most people that year. The team suffered a 15-0 losing streak in 2019, and 2020 turned up similarly dismal before COVID-19 struck.

The lacrosse team started back up in 2021, racking up a devastating 12-0 losing streak for the season; however, one freshman on the team had already begun shaking things up in a good way.

His name is Gavin Cook, and he is from Syracuse, New York. Apart from being an attacker and midfielder on the lacrosse team, he is also a sophomore theology major.

Cook currently leads the team in goals, having scored 22 this season — the next highest scorer has 18. Last year, Cook led the team in goals and assists, together equaling 26 points — the second highest on the team had 15.

“(As an attacker), you rely on the defense to be able to cause turnovers and get you the ball,” Cook said of his role, “but, at the end of the day, if the offense isn’t clicking, and you can’t put up goals, then you’re not going to be able to have the outcome you want.”

Cook was named Offensive Player of the Week by the Presidents’ Athletic Conference, and he was named All-Conference Honorable Mention.

Cook also recalled when he scored nine goals and two assists against La Roche University on March 2, tying him in second place for all-time most single-game points scored.

Cook was voted to be a captain for the team during his freshman year with the Barons. He said being a captain at such an early stage of his career was overwhelming at first, but it taught him to lead by example and to be a steward to his teammates.

“You need to make sure you’re putting people in check and make sure they’re doing the right thing,” Cook said, “but, at the same time, you’re in this position, but you’re no different from anyone else on the team.”

Cook said he values his teammates more than any of his accomplishments, calling the men some of his best friends.

“I’ve been able to hang out, talk and mingle with so many other people because of how diverse of a team it is,” Cook said. “Everyone here wants it; everyone is here for the exact same reason you are. … I’m not the only one in this; people are in this with me.

“The culture of the team is very exciting, and (the team is) very worth being on. … Everybody on the team actually wants to win; they want to get to know each other better and (to) grow with each other.”

Cook has been playing sports his entire life and lacrosse since seventh grade. He picked up the sport because he was trying to play a different sport during every season of the year.

He did football in the fall, swimming and diving in the winter and lacrosse in the spring. He chose lacrosse over baseball, the latter of which he wasn’t fond of due to its lack of physical contact.

“At first I didn’t really enjoy the sports that much because I didn’t think I was the best athlete as a kid,” Cook said. “Then, growing up, … I couldn’t go a couple of days without doing some kind of sports activity.

“Whether it was playing catch with a friend outside or … pick-up football … My parents were very supportive. … My dad coached me when I was a kid for football, and my mom made sure I got to all of my practices.”

One of four kids, Cook describes himself as a “caring, giving guy” but also a “completely different person on the field” when he gets competitive.

Cook came to Franciscan after experiencing a reconversion in the faith. His reconversion granted him a greater desire to learn about the faith, which is what nudged him into Franciscan’s theology program. He was inspired by his hometown youth minister.

During his time at Franciscan, Cook became a part of Brothers of the Eternal Song household, having been nicknamed “Colonel Thanders.” Cook respects the Brothers’ genuine and open brotherhood between men.

Also, Cook is helping to choreograph the Franciscan University Musical Theatre Troupe’s production of “Newsies.” He himself learned to dance from a boys’ hip-hop dance program he attended as a kid.

Cook and the Barons are currently sitting at a season record of 4-3 with three wins — a major improvement from 2021’s losing 12-0. Cook will continue to lead the Barons as their captain and will hopefully bring more success to the team.