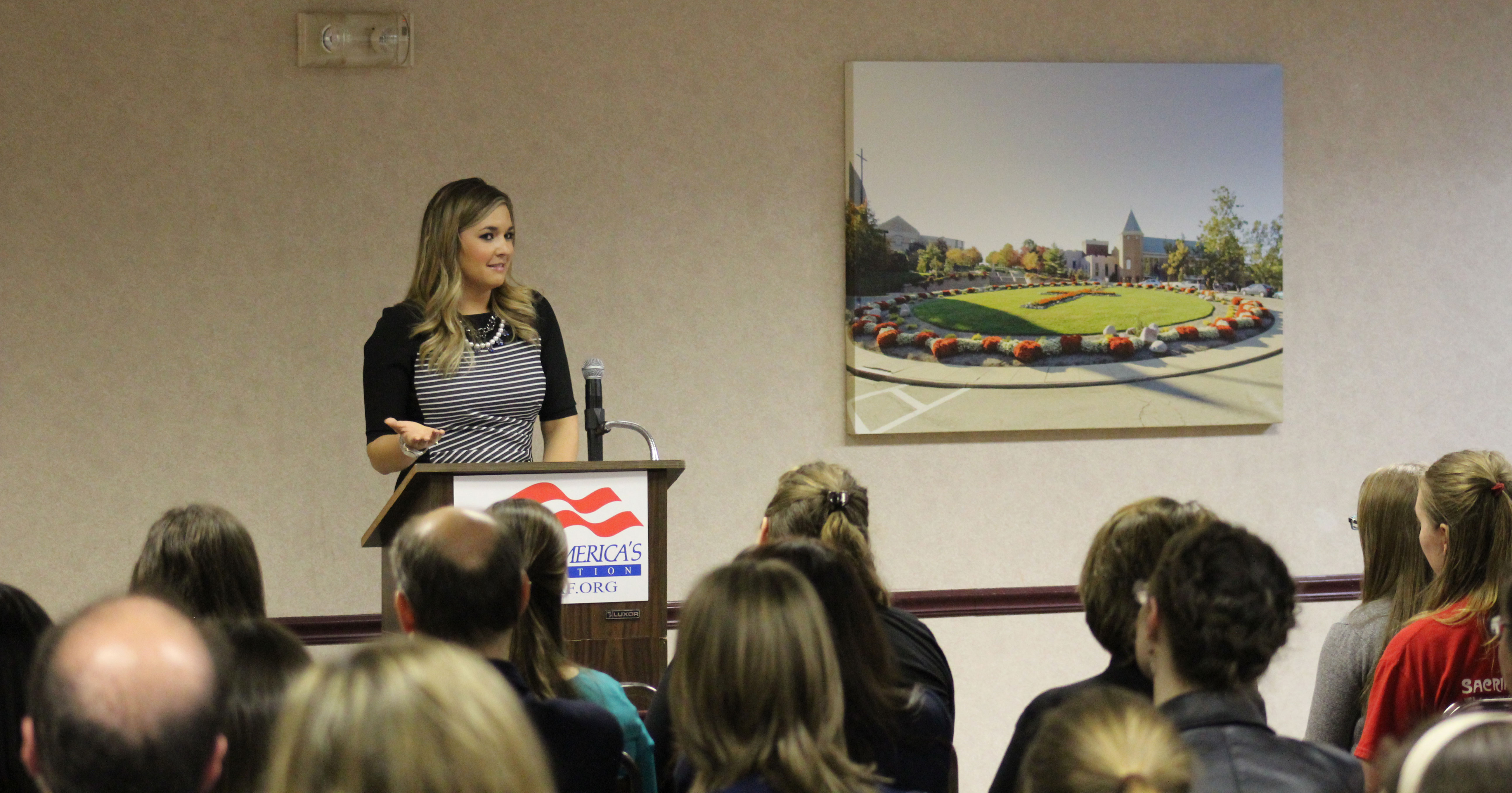 Katie Pavlich, editor of Townhall.com, New York Times best-selling author and frequent guest commentator on Fox News, spoke to Franciscan University students and faculty at the Best Western Plus University Inn on April 17 about “Feminism and the ‘War on Women.’”

Pavlich opened her presentation by telling the attendees about an experience she had when she visited England for the opening of the Margaret Thatcher Centre.

“As I was getting ready to leave Westminster Abbey after attending church, I heard chanting and realized there was an anti-free speech protest hosted by the Muslim Forum occurring down the street,” said Pavlich.

Pavlich said that while observing the protest, she asked the police if she could attempt to join the rally and ask some questions as a reporter. She said that the police told her if she went over, she would likely be attacked if not harmed physically.

Pavlich said that upon returning to the United States after witnessing such outright discrimination against women in England, she recognized that the so-called “war on women” in the U.S. was even more ridiculous than it had seemed before.

Pavlich said that the “war on women” was manufactured at a January 2012 presidential debate that was moderated by George Stephanopoulos, a previous member of the Clinton administration. Pavlich said that this was a point in the race where Mitt Romney still had good momentum.

During the debate, which had centered on economics and foreign issues, Stephanopoulos abruptly asked Romney what he thought about banning all contraceptives, said Pavlich. She also said that a month later, Sandra Fluke was called in by the Obama administration to testify at a House hearing advocating for the mandating of contraceptives at Catholic universities.

Almost overnight, she said, the political left had manufactured the “war on women.”

Pavlich said that when one really looks at the ideology of the left, it is really not at all concerned with women’s issues.

“While women all around the world are suffering from legitimate rape culture, AIDS and a male- dominated society in which women in some places cannot even cross the street without being escorted by a man, women here in the U.S. are just campaigning free stuff and blaming men for the obstacles they claim they have,” said Pavlich.

Pavlich said that Obama has been an instigator of the women and an “objectifier” of women because of his stance that women cannot advance in society without items like contraceptives.

Pavlich said that during the 2012 presidential election, a commercial was aired by the Obama administration called “The Life of Julia.” She said that this commercial was made to victimize women as it portrayed them as helpless unless the Obama machine was there to give aid.

“In every stage of her life, the Obama welfare system would be there for Julia,” said Pavlich. “This is the true war. Making women feel as if they need handouts for everything in life from liberal radicals.”

Pavlich said that the proponents of the “war on women” seek to victimize women through discouragement, hopelessness and dependency, as depicted in the “Life of Julia” commercial.

“Why couldn’t there be a ‘Life of John’ ad?” said Pavlich.

Pavlich said that when one explores the history of women’s rights organizations, the underlying goal is the ultimate destruction of capitalism.

“From the time of Karl Marx until today, feminism has just been an issue used to distract people from the social and Marxist ideologies that (are) directly behind the crusade for women’s rights,” said Pavlich.

Pavlich said that in “Prairie Fire,” the manifesto of Bill Ayers, a 1960s and ’70s radical activist, Ayers said that women’s rights should be used as an issue to advance the socialist agenda. She continued by saying that Ayers and his underground movement believed that men suppressed women; women should then be portrayed as victims in order to break down the traditional family structure.

Pavlich said that Marx’s whole plan was to destroy the family and promote the state; instead of mothers and parents raising children, the state should have that cradle-to-grave responsibility.

“Groups such as the National Organization of Women have been created as ‘women’s rights’ organizations, but, in reality, they are all about socialism,” said Pavlich.

She said the whole Obamacare issue also has an agenda that attempts to target women as victims so that the liberal agenda can penetrate even more deeply into society.

“Since 2012, the left as accused anyone against Obamacare as anti-woman,” said Pavlich.

However, Pavlich said that women are more complex than men, use more healthcare then men and use a higher quality of healthcare.

“Contrary to popular belief, insurance companies charge more for women’s healthcare because they use more of it, not because they hate women,” said Pavlich.

Now, due to Obamacare, women are at a real disadvantage because they are unable to keep their doctors, and many of their insurance plans are not available anymore, said Pavlich.

Pavlich also said that students need to be informed about what the media says about rape.

“The left says that if you don’t believe their stats, then you support rape,” said Pavlich. “Rape happens, but the ‘one in five,’ ‘one in three’ number that they promote is based on faulty ways of gathering information.”

At the conclusion of her talk, Pavlich said, “I am sick of being defined by pills and my body parts. …Instead, women today should be defined by opportunity that is equal to what men have, the free market and hard work.”

One student in attendance Jeremy Schupbach said, “I though this talk was very informative to hear. (Pavlich) was very passionate about the feminist movement and laid out her arguments very convincingly.”

Fellow student Jacque Anderson agreed. He said, “I appreciated that she said that women need to stand up for themselves. … We have the power to do what we want without the help of the government.”

On the other hand, Isabelle Farineau, president of Franciscan Feminists, was disappointed in Pavlich’s talk.

“Her reductionistic view of a phenomenon that has lasted for centuries is a little unsatisfying (as) someone who appreciates how much positive progress those before me have done,” said Farineau, in an email interview.  “To say that all women have achieved equality is I suppose easy for a white, well-paid employee of a major network with that perspective … to say but that doesn’t make it true. We can argue about the wage gap all day long, but I don’t believe any reasonable person can deny the unique and pressing struggles of that women face, like discrimination, rape, domestic violence, human trafficking and, overall, trying to support and maintain yourself when many peers, media and even family mock you, break you down and denigrate your dignity because you are simply a woman. While I would never say things in this country are as bad as many other places in this world, to say that we have accomplished harmony and equality between the sexes in the USA is outrageous.”

However, student Samantha Marinez said, “Katie Pavlich was right. … For the most part, women do have equality with men. What is really needed is hard work and dedication.”

Student Sophia Page said, “She was articulate, but the topics were vague. … When policies and issues are brought up though, fully explain what could be done to fix them and what the actual numbers are (in regards to women’s issues statistics).”

Pavlich’s speech was sponsored by Young Americans for Freedom, and special thanks were given to Jefferson County Republican Women and Franciscan University Student Government for their support.