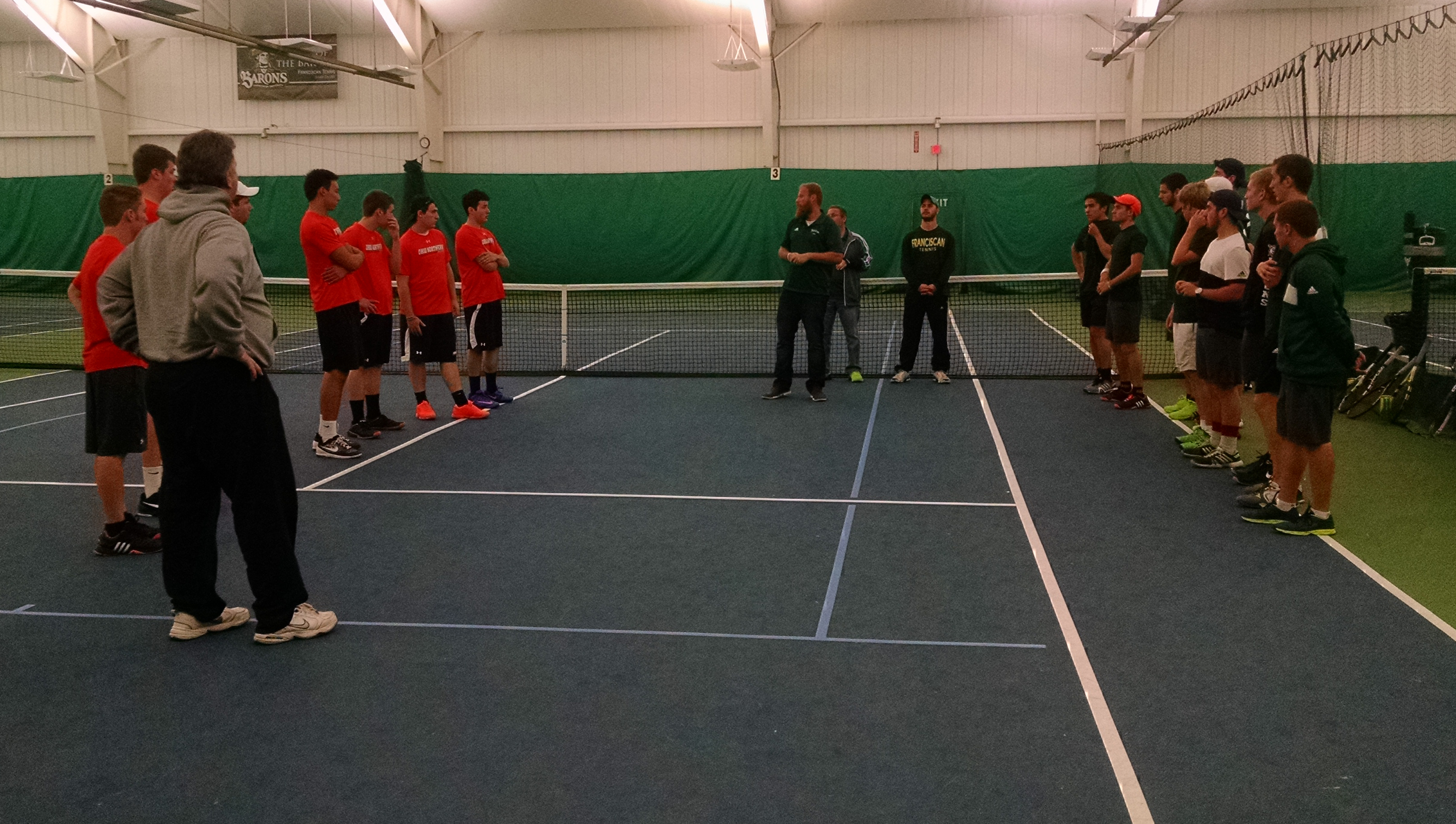 Franciscan University men’s tennis made a little bit of history Saturday afternoon by defeating a team from the Ohio Athletic Conference (OAC) for the first time in five years with an 8-1 win over Ohio Northern University.

Beating the Polar Bears also marks the first nonconference win of the spring season for the Barons and Franciscan’s second win on the weekend.

“We haven’t won an out-of-conference match yet this year,” said Head Coach Jeremy Ellis. “It was just good to get the win being out of conference and then winning 8-1 was huge. The guys played better than they have all season.”

With the OAC traditionally being a tough conference, Ellis knew that his team was going to be in for a tough match and that doubles was going to have to play strong to give the Barons a shot at a win.

“The one thing I’ve said from the very beginning, if we win all three doubles, going up 3-0 helps tremendously,” Ellis said.

No. 2 and No. 3 doubles cruised to easy 8-1 victories but No. 1 doubles was a different story. Sophomores Jarek Sulak and John Gallagher faced a strong ONU team that put up a good fight but Sulak and Gallagher were able to pull out an 8-5 win.

Inspired by the strong doubles play, Franciscan proceeded to win five out of the six singles matches.

“I think the momentum was going our way going into singles,” Ellis said.

Playing alongside the three doubles matches, freshman Richard Watson fed off that momentum to win his No. 5 singles match 6-7, 6-2, 6-0.

“Even when things got tight for RJ at No. 5, losing the first set in a tiebreaker but then pulling it together and winning pretty easily those last two sets, that’s the momentum from winning doubles,” Ellis said.

Senior captain David Freytag also played a tight match on court No. 4 in his return to the singles lineup. The senior had a large lead in the first set before his opponent began a comeback, forcing a tiebreaker. Freytag won the breaker and carried that momentum, cruising in the second set to a 7-6, 6-1 victory.

Ellis really credits the entire team from No. 1 doubles all the way down to No. 6 singles for all playing strong matches and pulling out the tough nonconference win.

“All the guys across the board played really well today,” Ellis said. “I want to attribute it to this being (the) first time we’ve really had an official home court. Belleview obviously is our home court, but we rarely play there because of the weather. This is the first time we’ve actually had a home facility where we practice a majority of the time. I think it feels like home and they played well and they were used to it. I think that helped us bring in this win.”

The Barons will return to the Western Area YMCA of Pittsburgh on April 3 to take on Allegheny Mountain Collegiate Conference opponent Pitt.-Bradford with first serve at 2 p.m.