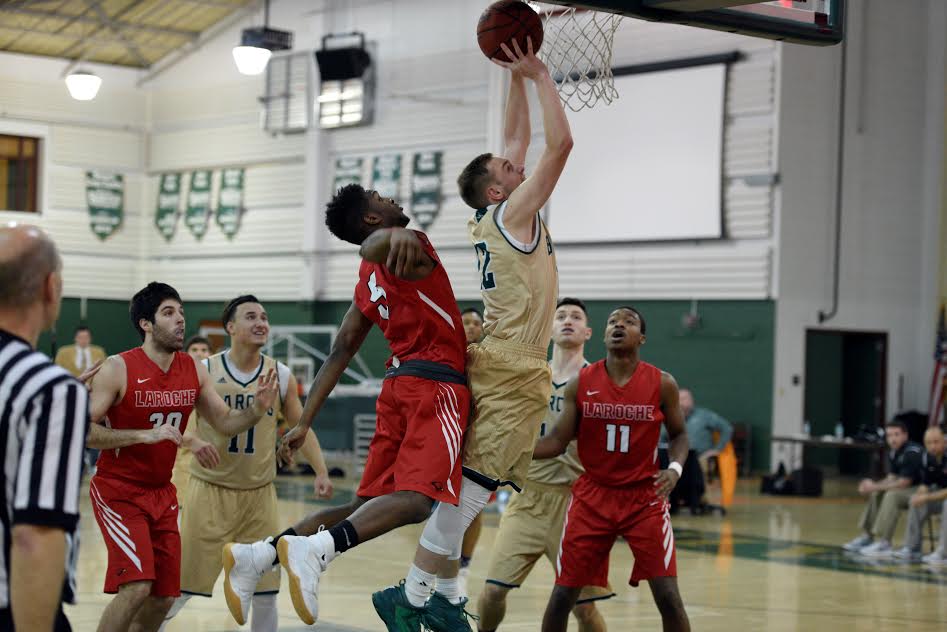 Franciscan University’s men’s basketball team lost a challenging game against La Roche College on Jan. 25 with a final score of 75-54.

Within 5 minutes, the Barons took their first lead of 7-5 with a far jump shot by freshman Michael Mendicino. Soon after, freshman Joe Schriner sunk his second three-point shot of the night, making him Franciscan’s top scorer of the night with 13 points.

The Barons had a strong first half holding La Roche to a fairly even match for the first 15 minutes with a score of 23-20.

Tension was high in the second half with technical fouls against both teams. La Roche was soon able to clench the lead.

Despite the score, the Barons refused to let their confidence waiver and even through the last three minutes the Barons continued to hustle, with Schriner forcing several fouls in the paint.

Throughout the game, the Barons were able to effectively move the ball scoring a strong 25 points off the bench.

This semester the Barons gained two new freshman transfers, Aaron Foldi and Matt Trent, both of whom have added fresh energy and competition to the team. With a height of 6-7, Trent was a great addition, leading the team on Wednesday with 14 rebounds.

Over the course of the season, the Barons have had a strong defensive game with freshman Josh York and junior Juwan Perkins each managing to reach over 100 rebounds.

After the game, freshman Nick Mersch commented on the team’s mentality.

“It’s pretty tough losing a lot of games but we’re taking big steps every day and coach does a great job of staying positive,” said Mersch. “It keeps us positive too.”

Mersch said, “We all like each other and it’s nice to be that tight with a group of guys regardless of whether we’re winning or losing.”

The Barons next home game will be on Wednesday Feb. 8 against University of Pitt.-Greensburg at 8:00 p.m.