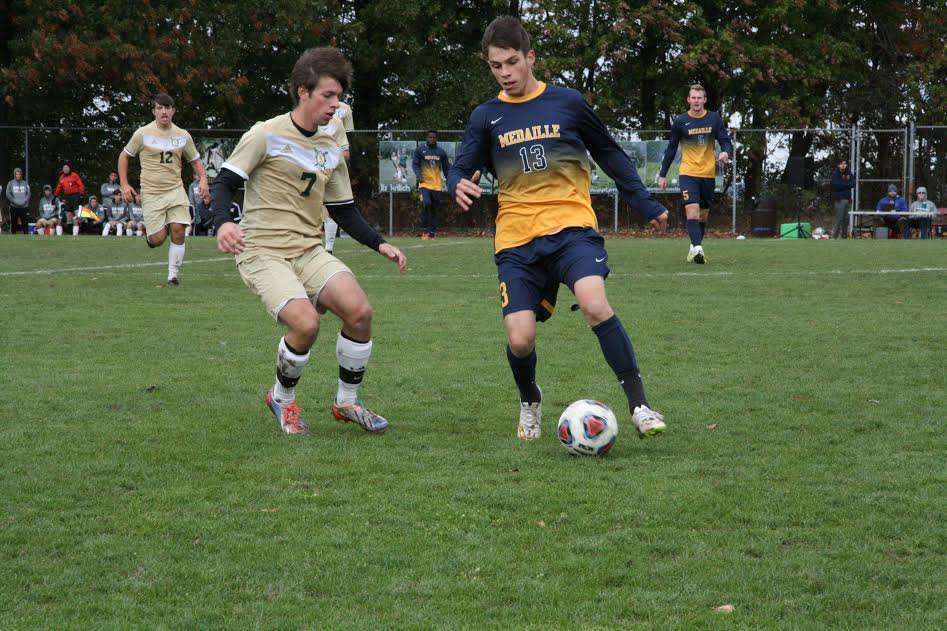 After a pre-game ceremony honoring the team’s seniors and their families, the game was underway shortly after 3:15 p.m, with the Barons in their short-sleeved home uniforms despite cold, windy conditions.

The Medaille Mavericks kept the pressure from the start, earning repeat shots on goal early. The Mavericks connected on their first attempt just after the 23-minute mark of the half, to put them up 1-0, with a lead they would never relinquish.

The Barons were down only 1-0 at halftime, but, in a span of just fifteen minutes after play commenced in the second half, would see their deficit increase to four. Franciscan’s goalkeeper Thomas Dosedel registered eleven saves on the day, the result of consistent forward play from Medaille.

Close shots for the Barons’ offensive front was the story of the afternoon for Franciscan’s squad: freshman Jacob Rigaud sent a shot off his head just above the crossbar. Junior Leo Hermann put a shot wide, and senior captain Joseph Duran saw a shot into the arms of the Maverick’s goalkeeper.

Despite the loss, Head Coach Christian Bobak remains proud of what the Barons showed on the field. “I was really pleased with the effort throughout the entire game. We just had a few mishaps…and we’re definitely going to work on offense.”

Bobak said he’s especially proud of the seniors on his team this year, Joseph Duran and Joe Francis. “They’re the only seniors to take us to the playoffs in school history…they worked so hard this year.” He further said that the seniors “have wanted it since game one” and that they provide an excellent example for the underclassmen.

The team finished the season 10-6-1, with a dominant 6-3 conference record, and has not yet received its tournament seeding or first-round opponent. Bobak said the team will be prepared. “We’ll be ready,” he said. “Mentally, physically, spiritually, we’ll prepare the boys.”

2016-10-25
Previous Post: Lady Barons honor graduating players on and off the field
Next Post: Expansion of facilities allows for evolution of two departments