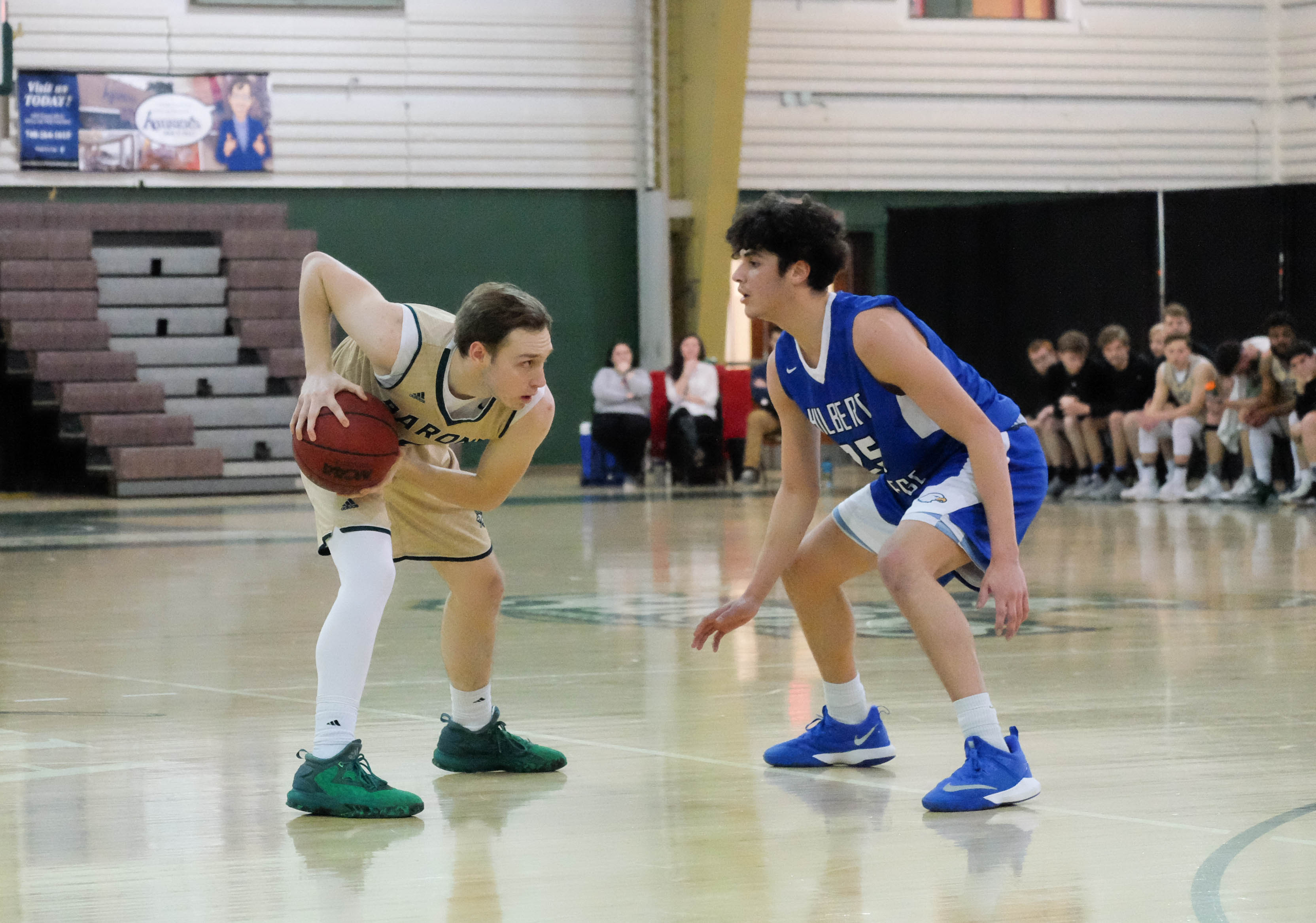 The Franciscan University men’s basketball team couldn’t land a buzzer-beater against Hilbert College, falling 67-66 in a heartbreaker of a conference matchup on Saturday afternoon.

Senior forward Garrison Holmes started the scoring for the Barons, missing a layup, then dropping the shot in for two after an offensive rebound. Franciscan would keep things competitive as the minutes pass dearly in the first; sophomore center Matt Trent knocked down a jumper at the 15:34 minute mark of the first half to bring Franciscan within one.

After going down as many as five points in the first half, Franciscan finally assumed the lead with just under half the period expired, when a Trent offensive rebound allowed senior guard Keoni Sablan to dish freshman guard Sean Hickey, who landed a jumper for the 16-15 lead. A layup from sophomore forward Joseph Schriner stretched the Baron lead to three.

Forward junior Juwan Perkins would add two of his 14 points on a layup with 8:45 remaining before halftime; a little more than a minute later, Perkins would break the game wide open, recording back-to-back threes from well beyond the arc, giving Franciscan the 26-22 lead. Perkins added two more points at the 4:22 mark, keeping the Barons ahead 30-28.

The Barons kept just ahead of Hilbert College’s attempts to erase its small deficit as halftime approached, with a three from Schriner and a jumper from sophomore forward Josh York helping to perpetuate the lead. After another Trent jump shot, two of his 19 points on the day, one point shy of his season high, the Barons took a two-point lead into the locker room at halftime.

The Barons would keep the lead until just before the halfway mark of the second half, courtesy of scoring contributions from Trent, Schriner and senior center JP Dombrowki. Trent would bring Franciscan within two points of a newfound Hilbert College lead, knocking down two free throws with 9:36 remaining in the contest. Trent would briefly provide the Barons the lead with another jumper, but Hilbert College would sink a two-point response of their own on their subsequent possession.

A timely, nine-point scoring run helped Hilbert College to distance its score from Franciscan’s comeback attempts before Schriner connected on two free throws at the 2:02 mark to put points on the board for Franciscan. Trent would step up to the same free throw line a possession later and sink two clutch free throws to bring Franciscan within four points, 67-63.

With only 52 seconds remaining in the game, Divens took a defensive rebound the length of the court, dishing to Hickey who knocked down a dagger three. The shot brought the Barons within a single point. After milking the shot clock, Hilbert College couldn’t connect on a jumper, and Head Coach Joe Wallace called a Franciscan timeout to draw up a prospective game-winning play.

Ultimately, the Barons couldn’t get the shot to fall and put a 67-66 heartbreaker of a loss into the record books. Hilbert College moves to 13-8 on the season, while Franciscan falls to 4-17. The event also marked a tribute for the 60th anniversary of the 1958 Franciscan men’s basketball squad winning the National Championship on a night respectfully dubbed Kuzma Community Night in memory of the famed late coach.

The Barons will next take to their home courts on Feb. 14 at 6 p.m.