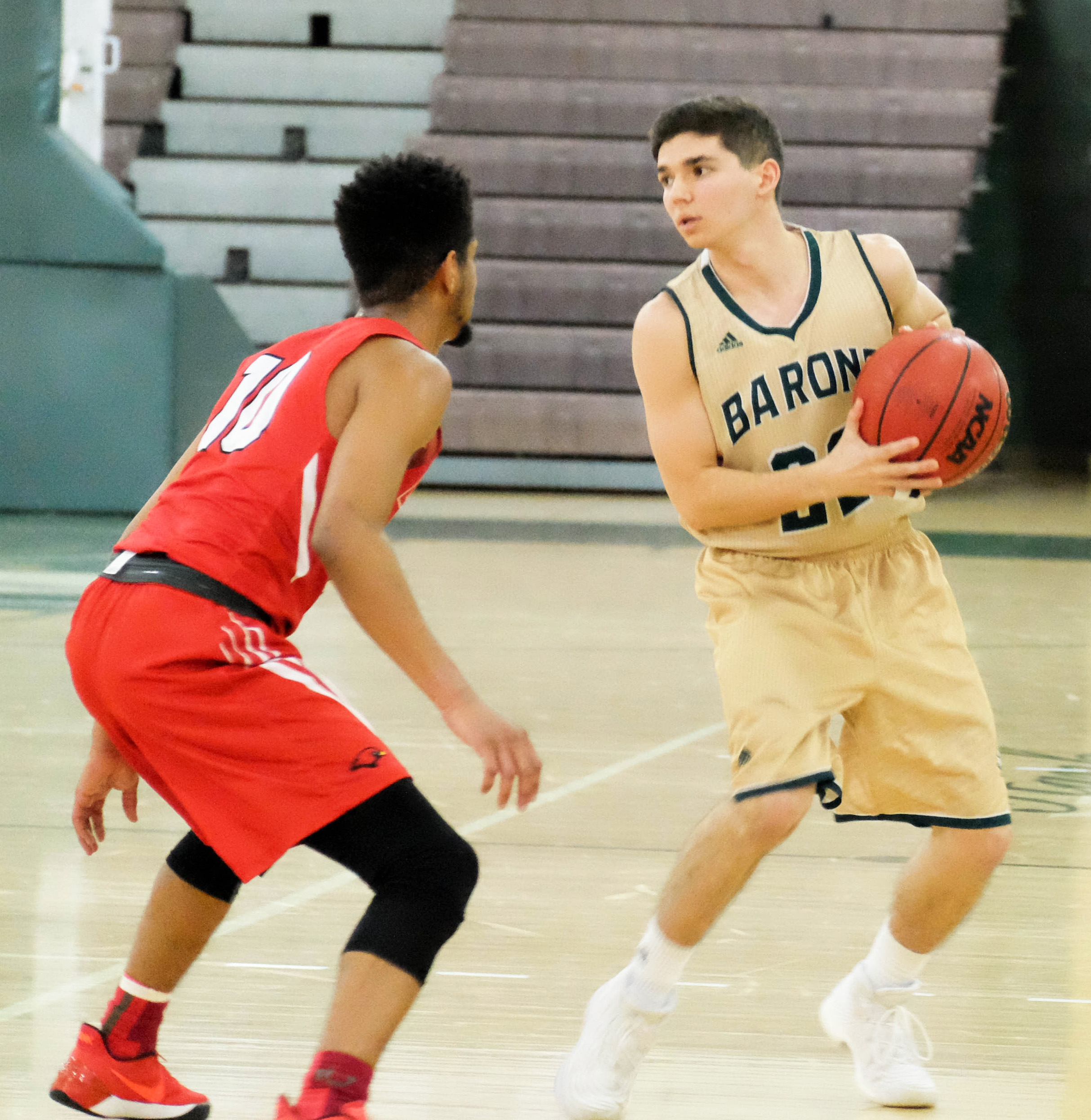 A close game in the first half became an increasingly formidable second half deficit, one too much for the Franciscan University men’s basketball team to overcome in its 78-49 loss to conference opponent La Roche College on Wednesday evening.

Game play commenced just after 6 p.m., when the La Roche Redhawks jumped to a 4-0 lead after a quick layup and subsequent Franciscan turnover. Junior forward Juwan Perkins erased three points from their deficit shortly afterward, transforming an errant shot from senior point guard Jacob Divens into a registered shot from just beyond the arc.

Perkins added two more points from successive free throws less than a minute later, after which point tight defense from both teams rendered the next two minutes scoreless. Freshman guard Sean Hickey, seeing his first home court action of the season, drained a three-pointer to give the Barons back the lead, a lead further extended with seven minutes remaining in the half, when senior center JP Dombrowski added a contested layup to the Barons’ tally.

A timeout called by second-year head coach Joseph Wallace was insufficient in stopping a 10 point La Roche run, putting the Barons down five points with little more than five minutes to play in the half. Juwan Perkins lessened the deficit to two points with another three-pointer, but after more Redhawks’ scoring, the half ended with two notched free throws from senior guard Keoni Sablan, sending the Barons into the locker room with a seven-point halftime deficit.

After a thrilling halftime performance by senior baton twirler Clarice Orteza, Sablan traded layups with the Redhawks; two midrange jump shots from sophomore center Matt Trent kept the Franciscan deficit at seven, but despite Barons’ defense, the squad was unable to lessen the La Roche lead. Trent added a layup with just over 14 minutes to go in the second half, again to return the deficit to seven.

A 10 point run by consistent La Roche offense, characterized by play which began to pressure otherwise stout Franciscan interior defense, allowed the Redhawks to accrue a 50-33 lead with 11 minutes to play. A Hickey three-pointer was countered by two Redhawks three-point shots slightly more than a minute later; La Roche led by as many as 22 points.

Perkins added two layups down the stretch to complement a layup registered by freshman guard Andrew Salasek. Even so, La Roche did well to distance themselves from their conference competition; by the time the final buzzer sounded, the Redhawks were ahead by nearly 30 points.

The loss moves the Barons to 0-5 in the year, a testament to the fact that despite sometimes stellar play from the squad’s solid senior foundation and supporting underclassman cast, the team is still actively testing lineup combinations.

The Franciscan University men’s basketball team will next take on fellow conference opponent Pitt.-Bradford at home on Dec. 9, with the tipoff just after 2 p.m.