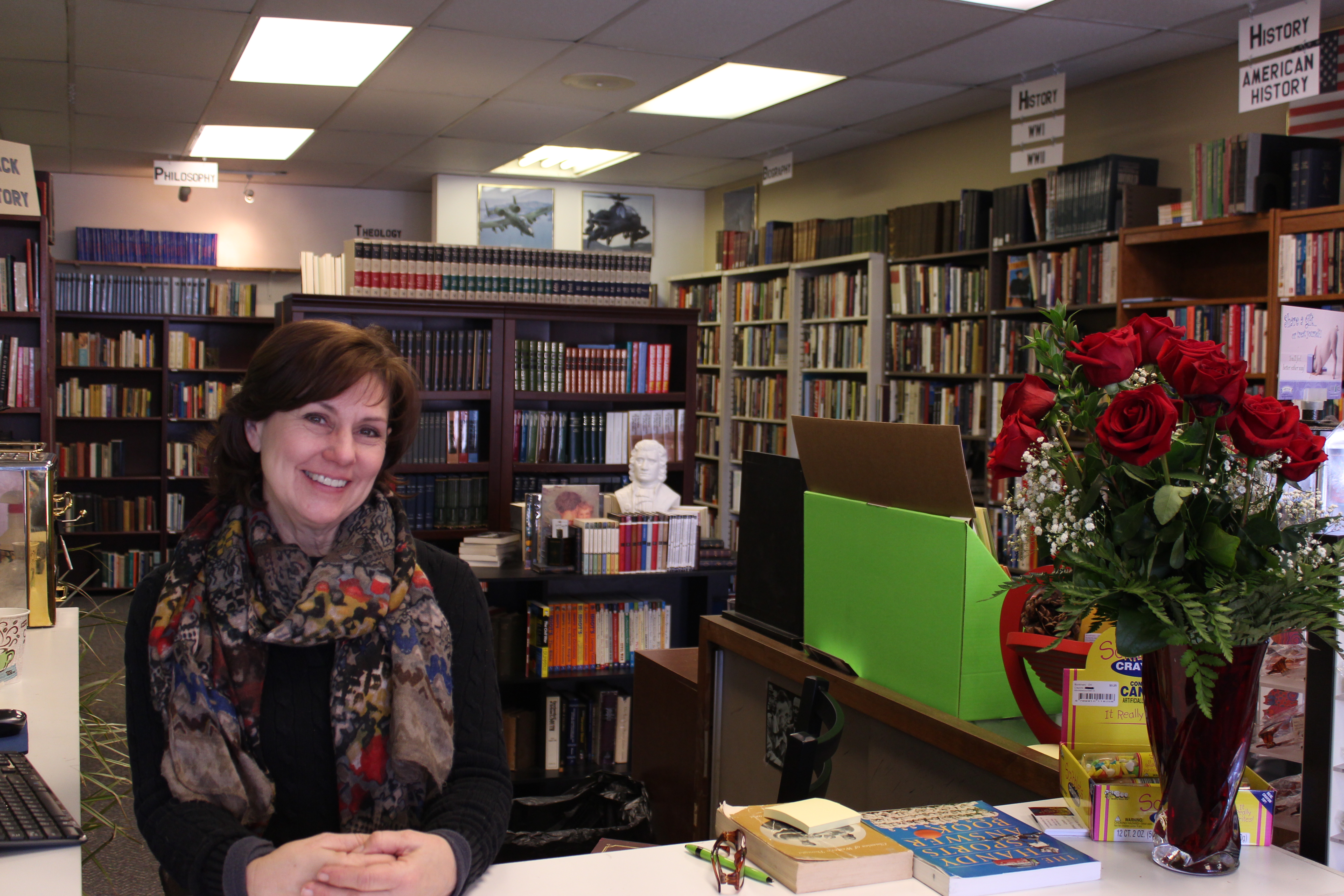 As the snows of another mid-February blizzard blanket the streets of downtown Steubenville, the pedestrians and drivers who are brave enough to leave their homes must fight for every inch of ground they traverse.

The snow falls faster than the trucks can clear it, leaving the roads and sidewalks under piles of gray slush. Most of the shops are closed, and their storefronts are made all but invisible by the falling snow.

The lights of the shop at 181 N. 4th St. shine like a beacon through the falling snow. Peter Marx, the owner, shovels the sidewalk and the area for street parking in front of the store. Inside the building, his wife, Patricia, takes care of customers, phone calls and coffee with speed and a big smile. Thanks to the couple’s genuine care and concern, the modest bookstore gives off a warm atmosphere despite the frigid weather.

Bookmarx, however, is far more than just a sanctuary for weathering snowstorms. The store is a testament to the character of those who run it; it reflects the warmth and strength of the couple. Both active members of the Steubenville community, the Marxs have devoted their time and energy into making Bookmarx a fresh start for downtown Steubenville.

The idea for the bookstore first began back in 2002. At the time, Peter Marx was planning to move north to Washington, D.C., from Atlanta, Georgia. He had a large collection of books that he did not want to move, so he decided to try selling them online with the help of Amazon.

“So I was sitting around my living room and I thought, well Amazon is allowing you to sell books online, so why don’t I give that a shot, just for the heck of it,” said Marx. “The books started to sell, and I was making some money, and I thought, ‘well, this is fun.’”

“I started to take the money I was making off Amazon and go out to look for new books to sell,” said Marx. “I bought books, CDs, VHS tapes, and selling them got to be really fun. I got this bug, where hunting for books became a real adventure.”

Marx recalls that his first big sale was an instructional pamphlet on how to make hammocks. The small booklet, which he bought for a quarter at a Goodwill store, was actually a rare piece that Marx was able to sell for $90.

After a few similar sales, Marx decided to take on bookselling as a full-time job. As he did, he met his future wife.

“I met Patricia right in the midst of the front-end stuff. She saw what I was doing, and we decided to do it together,” said Marx. “She quit her job. I never started another job, and we started doing books full-time online.”

Both recall how the online business quickly evolved into a physical bookstore.

“As more and more people started selling books online, it became less profitable,” said Patricia Marx. “That’s where the idea for the brick-and-mortar store came from.”

Peter Marx decided to move up to Steubenville in 2008. His family lived near the city, and he decided that downtown would be a good place to start his new bookstore.

“I liked the downtown, I liked the ambiance,” said Marx. “Rent was cheap. And with (Franciscan University), it seemed like a great place to start a used bookstore.”

Marx opened the original Bookmarx bookstore at 151 N. 4th St. He had roughly 7,000 books at the time, most of which concerned Catholic theology.

“A bunch of my books came from an ex-priest in Atlanta, a Navy chaplain, who had left the priesthood after Vatican II,” said Marx. “Plus, I always had an eye for the Catholic books because of my upbringing.”

Marx hoped that his wide collection of Catholic literature would help attract customers from Franciscan University’s Catholic campus. Students, staff and faculty from the university did visit his bookstore. Scott Hahn, popular theologian and professor at the university, was a frequent customer.

However, the business soon slowed.

“I was here for four years … the book business got more competitive and the prices of books were dropping,” said Marx. “People weren’t reading as much, and what they were reading was e-books. I started having to work harder for the same amount of money. Patricia was still in Atlanta, and I was here by myself. I got tired of it. The bookstore was too small. So we closed the store down and kept the online going while we looked for a new place.”

The store closed in 2012. Marx entered the oil and gas business, but he looked forward to the time when he could reopen the bookstore.

In 2014, the pieces began to come together for a new store.

The first step toward the new Bookmarx came when Peter Marx met the Franciscan University students involved in the Harmonium Project, a group that seeks to unite the university and downtown Steubenville through music.

“I met the core group of students involved in the Harmonium Project, and I really liked what they were doing,” said Marx. “It’s what I had wanted to do all along. So I told them about my plans to reopen the bookstore, to bring students downtown.”

The second element that helped bring the bookstore back was the library of Tom Chmelovski.

Chmelovski, who had been a good friend of Marx, passed away in the spring of 2014. His widow sold Chmelovski’s collection of more than 17,000 books to Marx. With so many new books, Marx decided it was time to reopen Bookmarx.

The effort to create a new Bookmarx began in the early summer of 2014. Marx obtained the new location with the help of his wife and some Harmonium Project members and began to organize the books.

The new store opened in November 2014, just before Thanksgiving.

A fresh start for downtown Steubenville

Patricia Marx runs the new Bookmarx store daily, and Peter Marx comes in to help in the evenings and on the weekends. The store offers coffee and free wireless internet, in addition to quiet reading spaces and books of all topics. Bookmarx also hosts special events, such as book signings. University students will also find that they can sell their textbooks to Bookmarx.

While the new Bookmarx has been very well-received by the Steubenville community, the couple has plans to branch out in new directions. Plans include expanding the store up and out, to make room for more merchandise and a live entertainment space.

“I’d like (Bookmarx) to be a real regional destination for books and entertainment, ultimately,” said Peter Marx.

But no matter how the store changes, Bookmarx will always be a warm and welcoming shop.

“I just want the store to be a place for people to come,” said Marx. “I want it to invigorate downtown (Steubenville) … and be a prime mover in helping to integrate the city and the university. That’s what I envision, what I would like to do with the store.”