Byzantine deacon teaches on icons as “Windows to the Word” 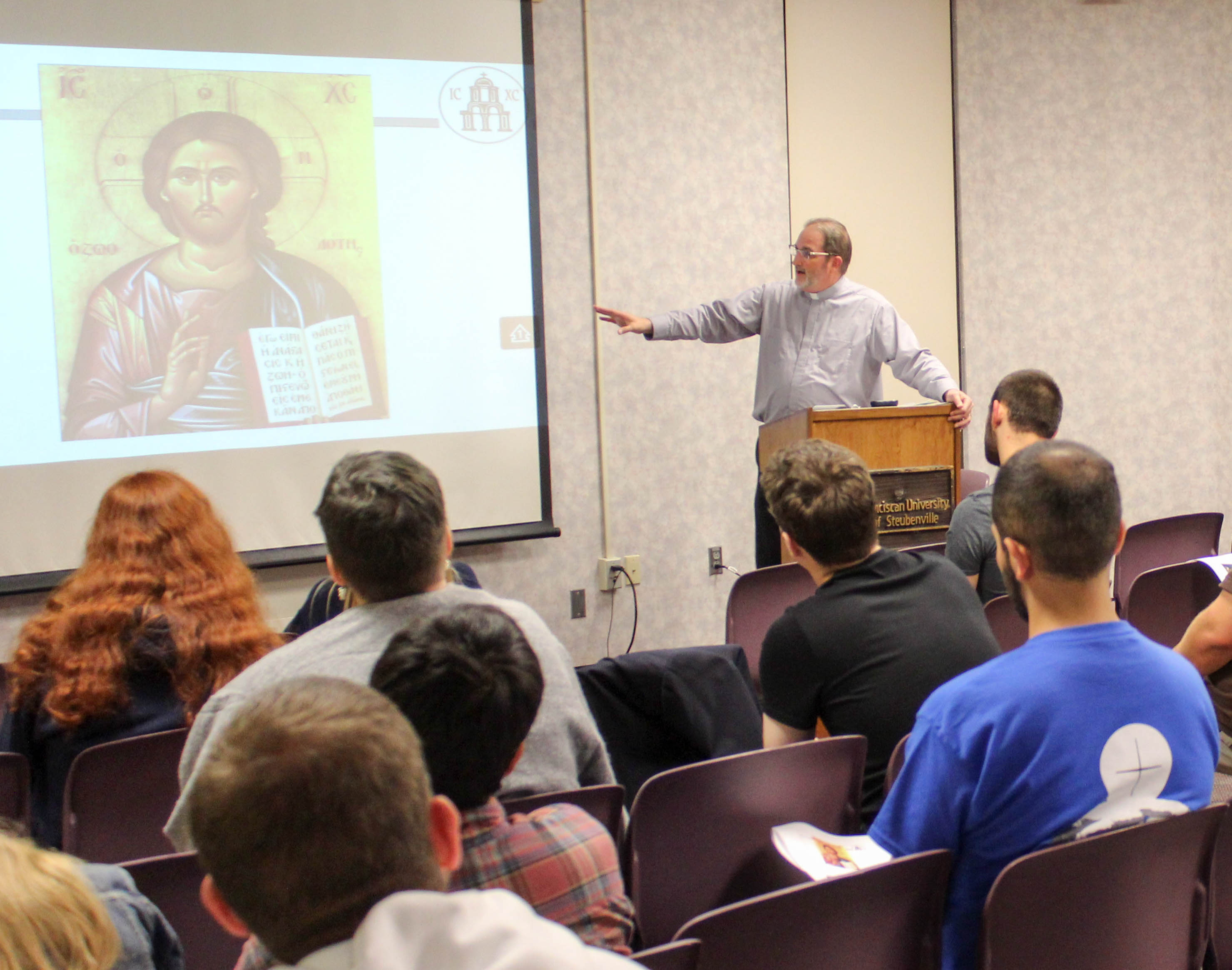 On Friday, Sept. 8, the Rev. Deacon Daniel G. Dozier presented on icons as “Windows to the Word” and effective tools of catechesis in a talk sponsored by the Byzantine Club.

Dozier delved into the beauty and symbolism of iconography, focusing on the Byzantine tradition of icons. Dozier explained how icons “are the Gospel in color.”

According to Dozier, the symbolism used in the icon teaches different aspects of the mystery. To help the audience find this symbolism, Dozier handed out papers explaining what different colors represented in icons and how they applied to specific icons, like the icons of Christ blessing and of the Annunciation to the Theotokos (Mother of God).

Dozier emphasized the role of the icon, with its rich symbolism, as a tool for catechesis. He elucidated the connection between the icon and the word. Dozier showed how icons draw from the Catholic faith, such as through Scripture, Tradition and the Church Fathers, showing how “image and word illuminate each other.”

As an example of the symbolism found in icons, Dozier explained that the three stars on the Theotokos’ garment — in the icon of the Annunciation — show her past, present and future virginity. Dozier mentioned that this prevalent symbolism also makes icons great for catechizing small children.

Dozier reminded the audience of the uniqueness of the icon, saying that it “is not just a type of religious art, (but) it is a type of sacred or liturgical art.” To show how this art is present in both east and west, Dozier explained that there are different types of icons, such as painted icons, with which most would be familiar; mosaic icons, which are present in many Roman churches; statue icons and stained glass icons.

Dozier explained the different styles and traditions in icon writing. Different areas of the world — in their different cultures — develop their own way to write icons, he said.

For example, Dozier relayed his experience in churches of the Syriac tradition. Dozier said that even though their icons did not look like icons from his Byzantine tradition, they were clearly icons.

To explain the different traditions in iconography, Dozier explained the different types of rites and churches in the Catholic Church. Dozier explained that the rites — such as the East Syriac, West Syriac, Armenian and Byzantine — have their own traditions and customs. Each rite, however, has churches according to it. Using himself as an example, Dozier noted that he is a deacon in the Byzantine rite under the Ruthenian church.

Junior Tatiana Federoff said that she was impressed by “the fact that each icon is a sign of the worship of all creation,” inspired by the tradition of using the entire animal kingdom to make the icon “from the animal-hair brushes and egg-yolk paints … to the human talent and time and imagination that create the work itself.”

Overall, Federoff thought it was “eye-opening (and) soul-feeding.”