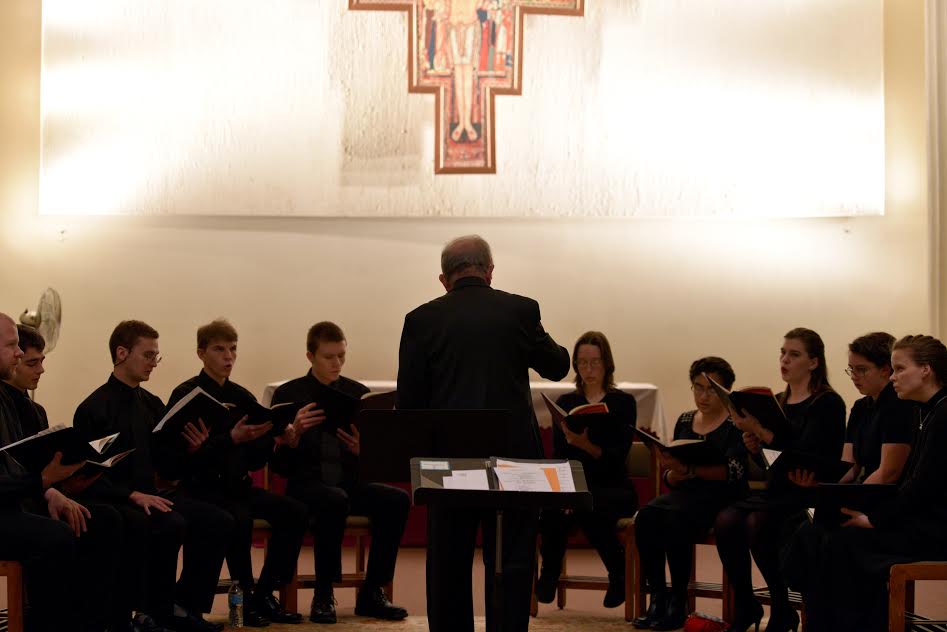 The concert began with Gustave Holst’s “Christmas Day” suite. While most famous for the orchestral suite “The Planets,” Holst’s Christmas masterpiece is a round of traditional English carols, such as “Good Christian Men Rejoice” and “God Rest Ye Merry Gentlemen.”

Next came a suite composed by Benjamin Britten, entitled “A Ceremony of Carols.”  This selection of songs, rather than coming from more well-known carols, came from an anthology of Middle English poems called “The English Galaxy of Shorter Poems.”

Freshman Jessica Lemoine especially enjoyed this “mix of traditional songs we all know and songs we’d never heard before.”

Junior Scott Peters said his favorite part was harpistc Melissa Knaub’s solo of “Greensleeves,” because “you don’t hear the harp that often.”

The audience was also struck by the professionality of the whole concert.

Lemoine noticed that “the balance sounded really well between all the parts.”

Corey Bradley, a visitor from Weirton, West Virginia, said that it was a “very reverent and beautiful” service.

The director of the Schola Cantorum Franciscana, assistant professor of music Nicholas Will, was the organist for the evening.

The University Chorale is group distinct from the Schola. Their main difference, in Melhorn’s words, is that “chorale is primarily for non-music majors while Schola consists of mainly music majors and minors”.

Chorale usually performs one to two signature concerts per semester, while Schola sings for multiple extraordinary form Masses throughout the school year.

However, the Chorale and the Schola do joint performances occasionally, notably the annual “Service of Nine Lessons and Carols” each December, which occurred on Dec. 6 in Christ the King Chapel.