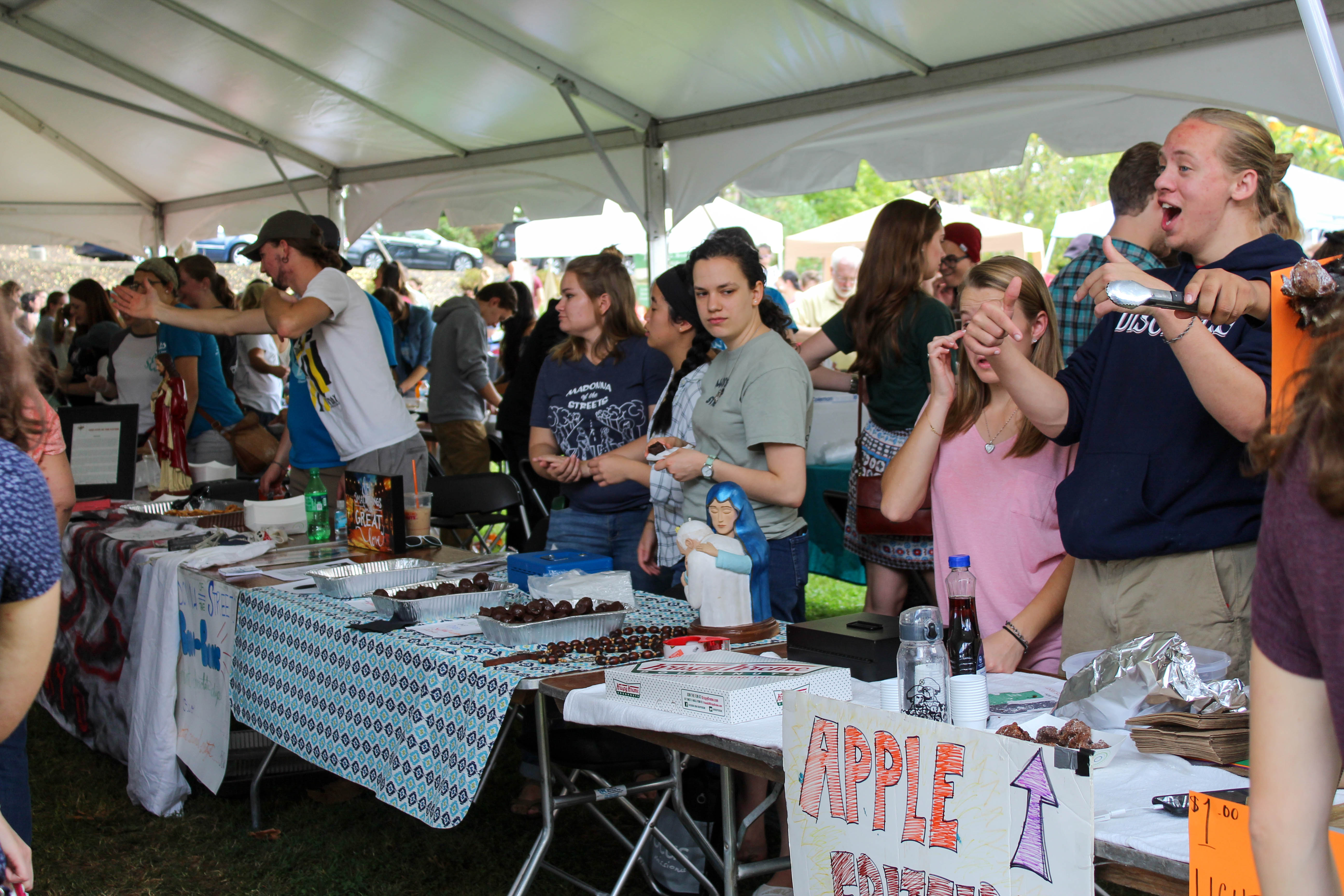 Homecoming 2017 started off in the most Franciscan way possible: with the Household Life Mass.  It was held in the Finnegan Fieldhouse at 4:45 p.m. on Friday afternoon.  Each of the 53 households was represented, as a few of their members processed in with banners.

As the cheering died down, Mass started with the Rev. Rick Martignetti, OFM, as the celebrant. It was the feast of St.Bruno, the founder of the Carthusian order, and Father reminded the students of the importance of silence and “listening to the words of God.”

The main attraction of Friday night was the talent show. Put on by Exc!te, the event entertained the crowd that left room on the bleachers only.

The two MC’s, junior Kyle Aubert and junior Patrick Neve, filled the Fieldhouse with their great energy. The acts included singing, of both covers and original music, dancing, instrumentals and, best of all, Yo-Yo Man.

The night ended with the Disciples dancing to “Pop” by NSYNC. This was the fifth time the Disciples have danced to a song by a classic 90’s boy band for the talent show.

Friday night also featured a beautiful play of the life of St. Francis at 7 p.m. Following this year’s theme of “Do whatever He tells you,” the event reflected on the milestones of Francis’ life accompanied by prayerful reflections.

The student actors, religious narrators and an eager audience followed behind three torches on a silent pilgrimage from the J.C. Williams center’s lawn and to near the Portiuncula.

After the final blessing outside the Portiuncula, senior Justin Perry commented, “I never knew that much about St. Francis until I did the play last year.”

Perry was not the only one involved who walked away from a little wiser, and the audience, newly educated about the university’s patron, was afterward welcomed to the J.C. Williams Center for refreshments.

The 5k was not only longer, but also more challenging, on accounts of the hills around campus. Seamus Kettner took first in the 5k with the time of 18:18. Julia Jenkins was the first woman to cross the finish line with the time of 23:31.

The sacramental themes of the day first began with the 10 a.m. Mass celebrated by the Rev Sean Sheridan TOR, concelebrated by seven others. In his homily, Sheridan told the story of a priest leaving the daily parish rosary to perform Extreme Unction for a dying man instructed the parishioners to continue without him.  After performing his duties the priest, tired, returned to his church to find them praying their thirty-seventh decade. Sheridan used this to exemplify the year’s theme from John 2:5.

Sheridan imparted a further message of wisdom especially for the month of the rosary, saying, “All of us need to continue to turn to the Blessed Mother for her help.”

Shortly after Mass, the annual Franciscan fair that characterizes homecoming weekend opened to welcome all the visiting families and students. Many alumni also visited, some bringing their children to visit their Alma Mater.

The fair lasted all afternoon from noon until four. During that time students and families could walk through the booths where vendors, mostly households, offered food and wares such as jewelry, artwork and plants. Other features included household led activities such as sword fighting with the Knights, beard and face painting, and bouncy houses.

Near the end of the university’s fair, Fr. Shawn Robertson T.O.R. conducted the blessing of the animals just outside the Portiuncula chapel. There was a great turnout, with over a dozen dogs, a handful of cats and even a cockatoo, brought by their owners for a blessing. Francis, a four-year-old collie, with a black coat matching the friar’s habits was most eager to attend with his owners, the Englefields.

The afternoon also featured an informative and insightful lecture on the lives of prominent American saints, entitled “The American Dream Exhibit.” The exhibit, first conceived by the Communion and Liberation group, was displayed in the Gentile Gallery twice in the afternoon, and delved into the question: ‘What is holiness?’

A definite highlight was the Festival of Praise in the Fieldhouse at 7:00 pm. Catholic speaker and blogger Dave Van Vickle, alumnus of the university, gave a short talk beforehand, sharing some personal stories and encouraging students to “surrender to God’s will.” This was accompanied by a brief but touching video of the Rev. Michael Scanlan, T.O.R.’s legacy.

Anthony Beltran, a Philosophy Graduate student, assisted Fr. Nathan as a server and said he could “feel the energy” as he walked the aisle during adoration. He also noted how wonderful it was to see everyone praising.

The weekend finished out with 10:30 a.m. Mass on Sunday, Oct. 8th, which was celebrated by Fr. Shawn Robertson T.O.R.  in the Fieldhouse. It bookended the weekend well with a reminder of where it began.

Homecoming 2017 was a time of fellowship, beautiful liturgies, and excitement all across campus. The Franciscan University community knows that there is something about coming home that will never grow old.