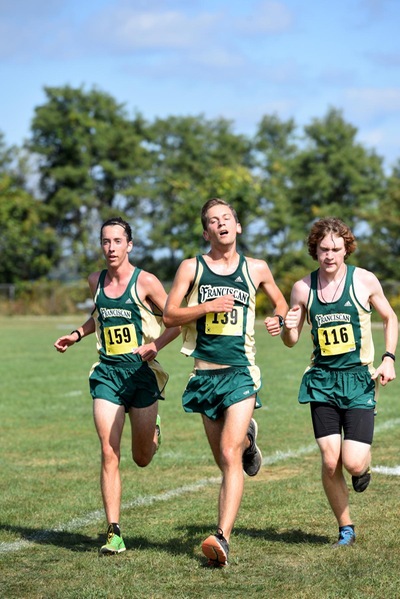 This past fall, Franciscan University’s cross country team proved to be top competitors, with both the men’s and women’s teams taking second place in the AMCC conference final this past fall.

One aspect that made this cross country season very different from previous years was the new talent on the team, which included freshmen, transfers and students who had never before run at a collegiate level. However, even with very few veterans returning, the new runners were able to help carry the team.

Head Coach Daniel Kuebler said the season as a whole, and particularly the conference final, was very satisfying, and several of the runners managed to come away from the final on top.

Kuebler said, “(Sophomores) Grace Galligan and Bernadette Williams finished in first and second (at the conference race) which was really rewarding to see because they put in a lot of work, they’re both new runners and it took them a while to get them to where they needed to be but they improved gradually throughout the season.”

This year’s cross country team was also much smaller in comparison to previous seasons, which allowed the athletes to form strong, cohesive bonds.

“The dynamic was really nice because the captains on the teams weren’t upset that they weren’t the top runners,” said Kuebler. “It’s a really tight knit group of guys and girls on the team and they really take care of each other and support each other, so I think the guys were just excited to have such good runners on the team and the same goes for the women.”

The men’s team captains, junior Tim Jackson and sophomore Nick Long, described their experience and role in leading by example which included cheering the team on, setting team trends and organizing team nights.

In addition to being motivational leaders, Jackson and Long ensured that the team focused on the spiritual aspect of the sport which was incorporated by offering runs for alumni and celebrating several team Masses throughout the semester.

As an engineering major who plans to transfer next semester, Jackson spoke about his experience on the team.

“It’s been my third year here so I’ve known Coach Kuebler the whole time and he has been awesome, probably one of the greatest things about cross country, as well as the camaraderie,” said Jackson.

As a first-year runner, junior Will Blackley spoke about his experience on the team.

Blackley said, “In a lot of ways it’s an individual sport, but between the practices, training together and traveling together, it really is a team sport, at the end of day you’re not on your own, you do need to rely on others.”

Coach Kuebler said he hoped that the team would do even better next season.

“We have a lot of people coming back next year so it’s kind of building on that,” said Kuebler, “so I think next year we’ll be able to start at a higher level than we did this year.”