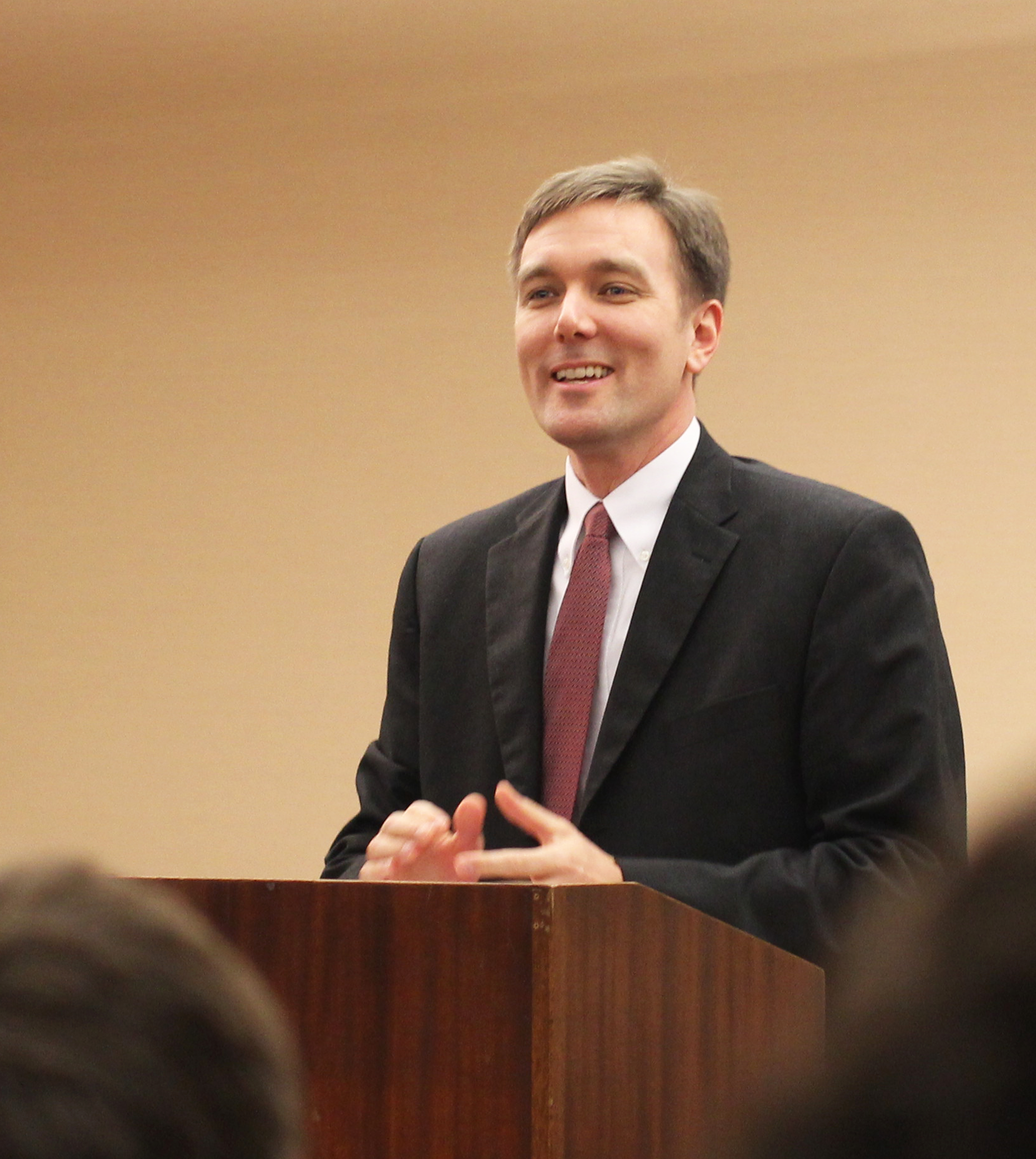 When David Schmiesing began attending Franciscan University in 1988, there was no study-abroad program, the student population was half its current size and students played basketball in the Gentile Gallery.

Twenty-eight years later, the university has cultivated a vibrant Austria program, doubled in size and added several new facilities, including Finnegan Fieldhouse. The one thing that hasn’t changed, said Schmiesing, is the overall joy to the campus.

“Franciscan University is a unique, special place, and there is nowhere else like it,” said Schmiesing.

Schmiesing, now vice president of Student Life, was born and raised about four hours west of Steubenville in Sidney, Ohio, the oldest of six children. Both of his parents had attended the University of Dayton, and so as Schmiesing worked his way through Catholic schools, his intention had always been to follow in their footsteps and attend the school to pursue a degree in engineering.

But those plans changes after his parents attended a Steubenville conference during his senior year and encouraged him to give Franciscan University a look to see if he would be interested. Schmiesing said he decided to give it a shot and went on a campus visit, where he immediately felt at home.

“I made a campus visit towards the end of the week, in the middle of March of my senior year in high school. There was nothing exciting happening on campus, but just being here, I knew that Franciscan was where I needed to go,” said Schmiesing. “It felt like the right thing to do.”

In addition to making the decision to attend the university, Schmiesing said he also decided he wanted to be a high school math and history teacher after graduating, so he pursued a degree in history. He became very active on campus, playing several intramural athletics and become a founding member of the Soldiers Under Command household at the end of his freshman year, of which he later became coordinator.

Schmiesing said he also spent considerable time working for the Troubadour, beginning as a sports writer his freshman year.  He became the sports editor the following year and was then asked to be the editor-in-chief his junior year.  Reflecting on his time at the helm of the Troubadour, Schmiesing said that while the job could be rewarding, it was also a lot of work and at times thankless.

“Sometimes I was working until 1:00 in the morning to prepare the issue to be printed the next day,” said Schmiesing. “I can remember thinking, ‘No one knows that I’m doing this, and they probably don’t even care,’ but we pressed on because we loved what we did.”

As it turned out, a finished edition of the Troubadour wasn’t the only thing Schmiesing came to love from his time working at the paper.  During his term as editor-in-chief, he began working closely with Justine Franzonello (’93), who was the layout editor at the time. After working together during the entire school year, they started dating towards the end of the spring semester and eventually married in 1993.

During his senior year, Schmiesing was part of the first group of students to participate in the study-abroad program in Gaming, Austria. While there, Schmiesing said he helped develop the Austrian Embassy to provide Student Government volunteers to help provide oversight over certain activities and stay in touch with the main campus. He described his semester in Gaming as “very eye opening.”

“I had never been outside of the continent,” said Schmiesing, “so having the chance to grow in my faith and experience the universality of the Catholic Church while in Austria was really life changing.”

After graduation, Schmiesing completed his student teaching, in addition to other part-time jobs, as he waited for his then-fiancée to finish her degree. During this time, a temporary position became available at the university in the conference office.  The university needed someone to help coordinate off-campus conference events, the first of which was a university-sponsored trip to the 1993 World Youth Day, which was being held in Denver.

This eventually led to a full-time job in the conference office, one of several different positions he would hold before being appointed to his current position in 2006. Schmiesing says that he enjoys his position because it allows him to work closely with students, especially through his involvement in the Center for Leadership program. Schmiesing was a big part in bringing the program to life and said that the favorite part of his day is interacting with the students involved in the Center.

Throughout his time at the university, Schmiesing and his wife have raised their seven children in Steubenville, and he says that raising their family in Steubenville has been a great blessing. Three of their children have attended Franciscan, two of whom still attend the university, and while Schmiesing admits that at times it can be awkward for him and his children, it is overall a great blessing to be able to run into them around campus and attend Mass with them every once in awhile.

When asked what it is about Franciscan that has kept him here and drawn so many others to the university, Schmiesing doesn’t hesitate to say that it’s the overall joy that flows from the charismatic roots of the school. These roots, said Schmiesing, account for the school’s uniqueness and are what keeps people coming.

“Our culture at Franciscan is one of a kind,” said Schmiesing. “Many other schools have tried to imitate what we do here, but no one else has the roots or the history that we have. Not even close.”