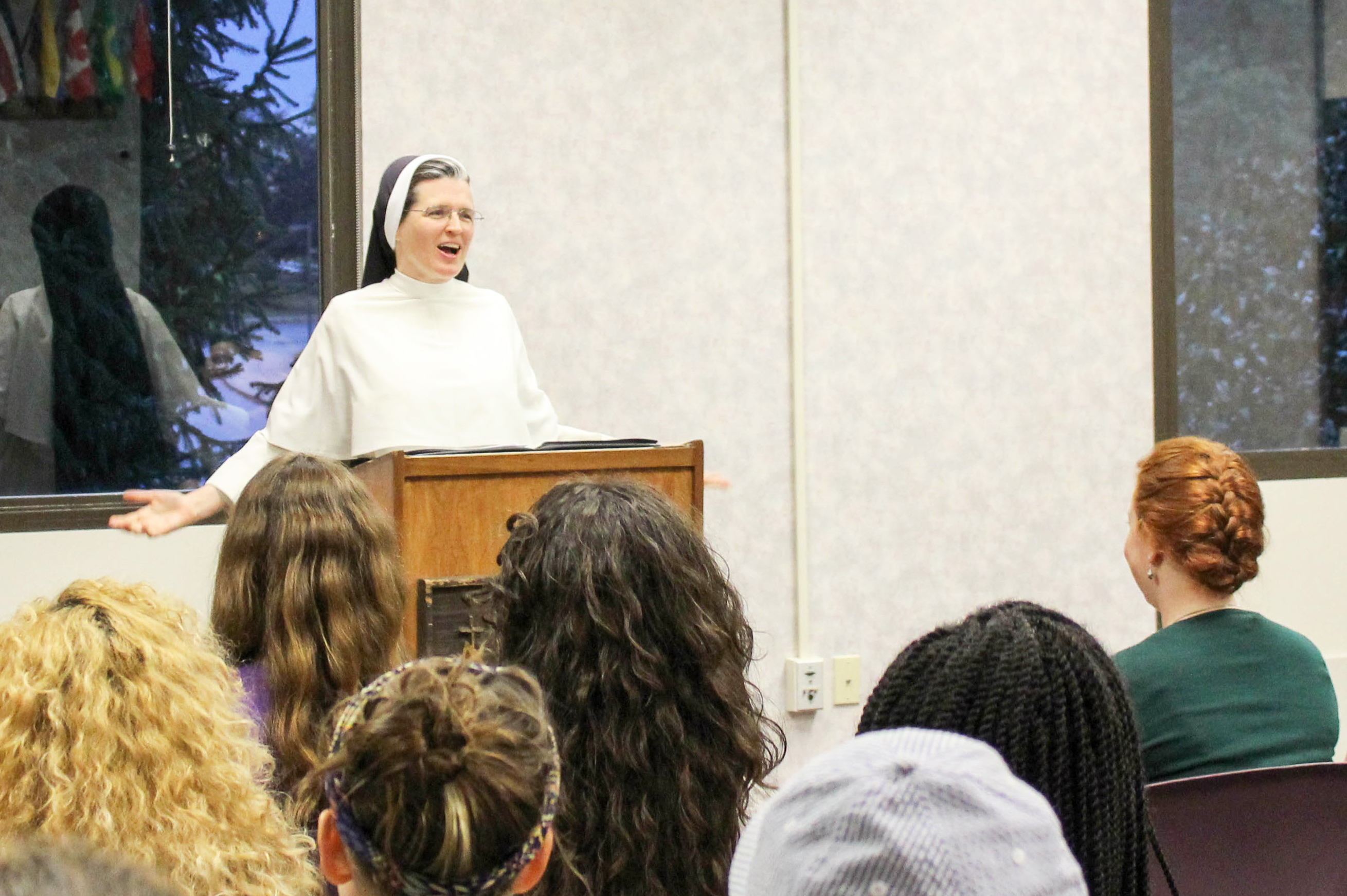 Speaking to dozens of students in the International Lounge on Friday night, Nashville Dominican Sister Mary Madeline Todd, O.P. introduced the topic of human dignity by saying, “The beginning of pro-life is self-understanding.”

Todd’s talk, titled “Finding Our True Dignity in Christ”, started at 7 p.m., and it was the first part of a two-night lecture event put on by the Students for Life as part of its Core Values Initiative. Teacher, writer and graduate of Franciscan University of Steubenville, Todd focused on understanding one’s own worth as a way of understanding that of others.

“What happens when you look in the mirror?” Todd said to the audience. “Would you see yourself as good?” Connecting to personal issues that many students face, she discussed the struggle of realizing self-worth and the effect modern culture has on this.

Todd prompted the audience with the phrase “I am only good if …,” encouraging individuals to examine what it is that they believe makes them unworthy of love. Christ, she said, loves each of them anyway.

The only way to truly understand human dignity, according to Todd, is through Christ. “Know yourself in Christ,” she said. “This is where you’ll discover who you truly are.” She specifically suggested Eucharistic adoration as an intimate means of self-discovery.

When individuals understand their own dignity, Todd said, they can begin to fight for the dignity of others.

This approach, Todd said, will translate into one’s everyday life. “When your gaze is on the Lord,” she said, “you see other people in Him too.” She explained that seeing others in the light of Christ on an everyday basis and treating them with that level of dignity is how one can be truly pro-life. “Pro-life is an entire way of being,” Todd said.

Todd’s talk was well received, and it had the audience not only meditating on the fundamental questions of life but also laughing at her witty jokes. “You could tell that she lived what she spoke,” said freshman Justine Smykowski. “She spoke from the heart … and she had a lot of personal stories to connect her points with.”

Sophomore Cassidy Roderick, president of the Students for Life, also expressed satisfaction with the talk. “She did a great job explaining the broader meaning of pro-life as a way of life instead of a view held on a single issue,” Roderick said. “To be pro-life is to be for the other person.”