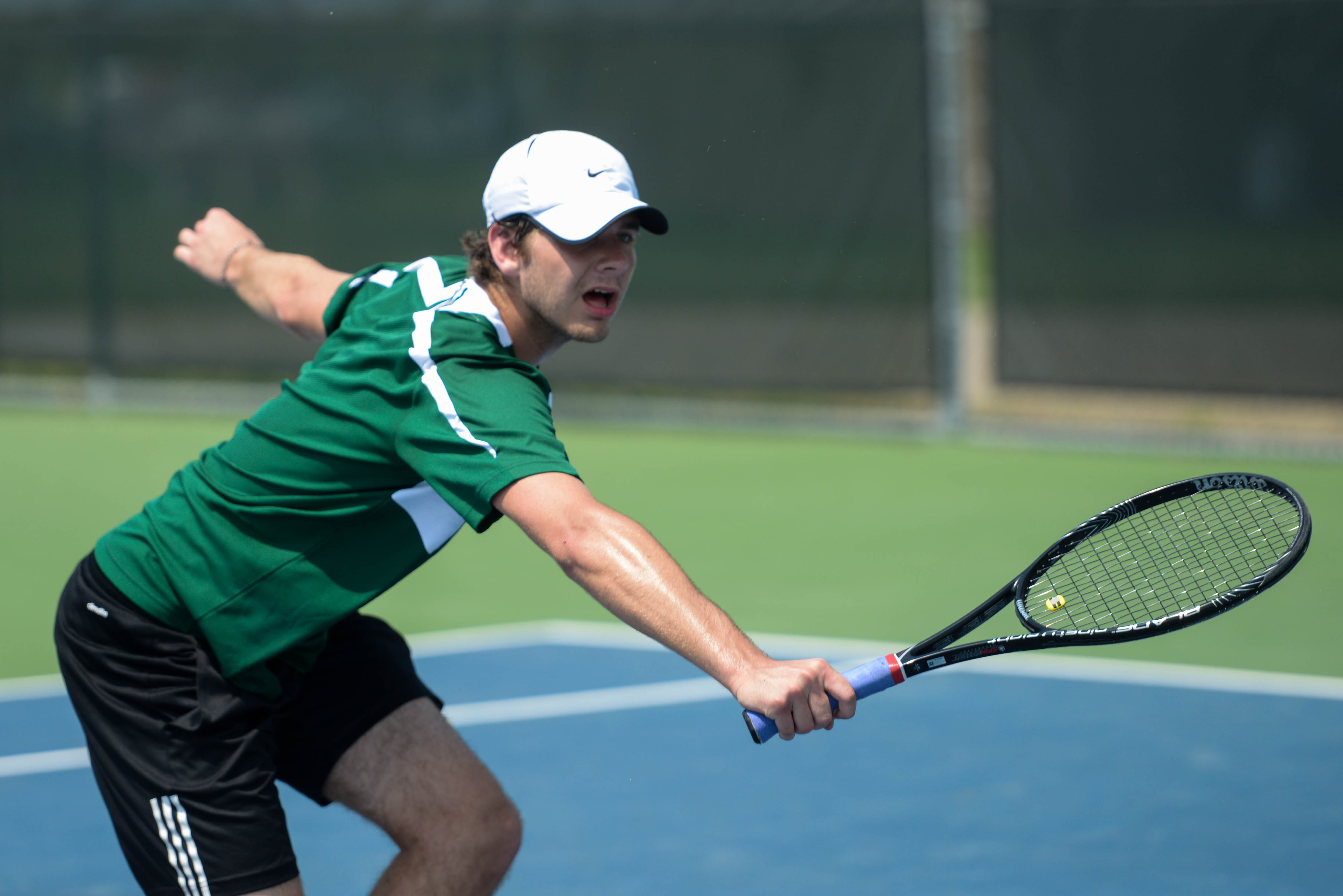 Freshmen John Gallagher and Jarek Sulak finished the season undefeated at no. 2 doubles by winning the only point for Franciscan men’s tennis in their 5-1 loss to John Carroll in the first round of the NCAA tournament at Kenyon College on May 8.

The freshmen duo finished a perfect 13-0 and solidified doubles play for the Barons all season long.

“John and Jarek is one of the best doubles teams I have had the opportunity to coach,” said Head Coach Jeremy Ellis. “It’s just great to see them win their NCAA match, just to show the NCAA that they are a real doubles team and they did it.”

The pair started out with a commanding 7-1 lead, looking to give Franciscan the early advantage in the match. The Blue Streaks battled back, however, to win the next five games, pulling within one of the Barons. After a long game that went back and forth at deuce, Sulak and Gallagher pulled out the 8-6 win.

Ellis said that he is impressed by the two and that they have an exciting collegiate career ahead of them.

“What they’re going to be able to do in these next three years is going to be incredible,” Ellis said.

Franciscan also had the chance to win a second doubles match on court three with freshmen Mitchell Plys and Connor Jooste. The two played well early, always staying within one game, before the Blue Streaks pulled away for the 8-4 win.

“They had many opportunities to pull that out,” Ellis said.

The tournament style of play where the first team to five points wins suddenly became the Barons worst enemy as JCU won quickly on courts one, two and six to seal the match even though the Barons were leading at no. 3 and no. 5 with Sulak and Plys respectively.

“It’s one of these times where you wish the match could play out,” Ellis said. “We could have won courts three and five and made the score closer.”

Ellis said that a team laden with freshmen appearing on the national level for the first time led to a lopsided score that isn’t a good representation of the talent that the Barons have.

“I think the nerves of the big stage makes it hard,” Ellis said. “We have freshmen from no. 2 to no. 5 so four of our guys are freshmen, five if you include Connor for doubles so it’s tough.”

However, the young team has a lot of promise for a successful future as long as the five freshmen return next season.

“It’s always the difficulty of keeping them all together because Franciscan offers so much, going to Austria and other things,” Ellis said. “It’s letting them know that bigger things are available if you stick together so that’s what we want to do.”

With veterans Zachary Quiza and Joseph Staniszewski also returning for their senior year, the Barons will continue to dominate in the AMCC and move forward in the NCAA for the fourth consecutive year.

“It’s great to be here for a third year in a row and we plan on staying,” Ellis said.

The Franciscan women’s tennis team also competed in the NCAA Tournament for the first time in program history. The Lady Barons matched up with MIT at host school University of Mary Washington in Fredericksburg, Virginia and lost 5-0.

At no. 1 doubles, the pair of Renata Crespo and Claire Haddad were the only Franciscan team to win a game against their opponent as MIT jumped out to a commanding 3-0 lead.

Freshmen Emily Mathais put up the best effort for the green and gold at no. 6 singles, winning three games against her opponent in the first set. Allison Jensen and Erin Coyne were the other Lady Barons who were able to win a game.

The tournament appearance also marks the end of an era for Head Coach Jenna Lynch who is stepping down from her position, adding extra emotion to the day.

Despite the change in coaching, the Lady Barons future is also promising as the team only loses one senior to graduation while the others return, motivated by the experience of playing at the national level.