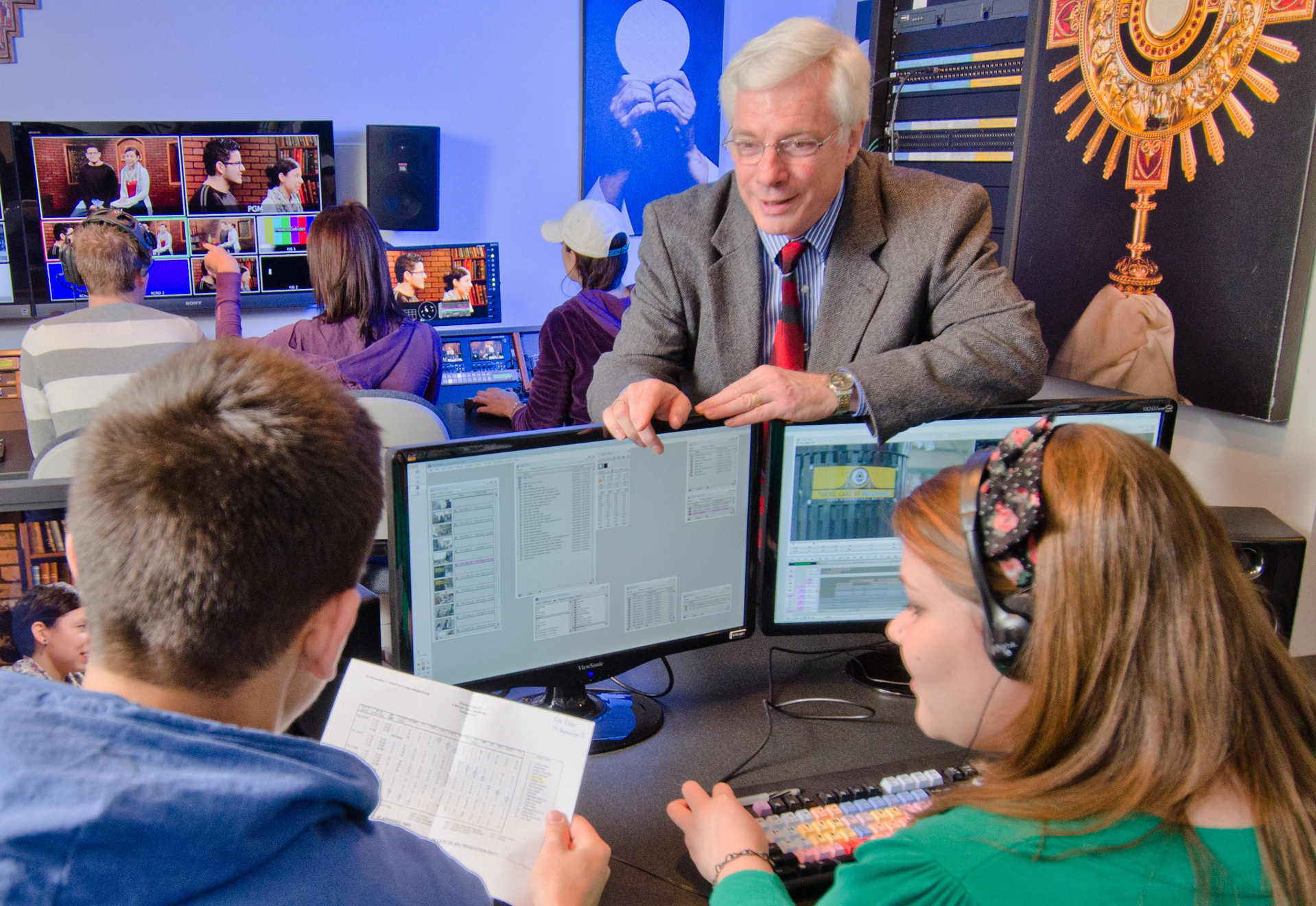 Perhaps for the “regular” person, the way James Coyle first came in contact with Franciscan University was out of the ordinary – but not for the Franciscan-oriented person.

Coyle, communications arts professor who has also chaired the communication arts program at Franciscan University, will be retiring this semester after 33 years of service. He said that he first came to know about Franciscan through a prayer group that he and his wife attended when they lived in Florida.

“Father Mike (Scanlan) would occasionally come down to Florida and visit a prayer group that my wife and I attended near our home. I first met him in 1976, a few months before he became president,” said Coyle.

Coyle said that the Rev. Scanlan would talk about the exciting things happening on the campus of Franciscan University and how the Holy Spirit was moving and changing hearts and lives of students.

The Rev. Scanlan’s repeated visits continued to re-ignite Coyle’s interest to visit the school. Despite his friends encouraging Coyle to “stay put” because, after all, who wants to work in the dinky town of Steubenville, Ohio, where the air stinks, Coyle’s interest in Franciscan University persisted.

Coyle made a trip up to Steubenville and met with Margaret Weber, who was an admissions counselor at the time. She gave Coyle a tour of the university and told him about Franciscan, its mission, goals and overall vision.

Nothing drastic came from that visit and Coyle continued working in corporate communications. During one of the Rev. Scanlan’s next visits to the prayer group, Coyle told Scanlan that, should the need arise, he was ready to make the move to Steubenville to teach.

In June of 1982, Coyle was on his way to do a shoot in Chicago for his company when he received a call from Franciscan University offering him an interview for an open position in the communications department.

“God called. I had the interview, was hired and had a 90 percent cut in pay,” said Coyle. “Our prayer (my wife and I), had always been, ‘Lord, if you don’t want us to do this, close the doors.’ He kept them open.”

In reflecting on his 33 years of working with students at Franciscan University, Coyle said that it is a special amount of years because it reflects the lifetime of Christ.

Coyle also looks back fondly on all the years he was able to work the various media aspects of the Steubenville summer youth conferences. He said that these youth conferences gave him a chance to interact with students on more than just a classroom level.

Coyle said that another highlight of his time at Franciscan was producing and directing an interview program with the Rev. Michel Scanlan in the mid-80s. Eventually, the funding for this special program ran out, but, in a way, lives on today through “Franciscan University Presents” for which Coyle was the initial producer and director.

“I worked with a student crew and Father Mike was the host,” said Coyle. “It was a great desire and goal of Father Mike to shoot a show on the campus. It was an evolutionary process.”

A process that has since come to fruition.

Coyle said that students’ relationship with God is integral in finding and working in their vocations.