‘Every life is a gift’ 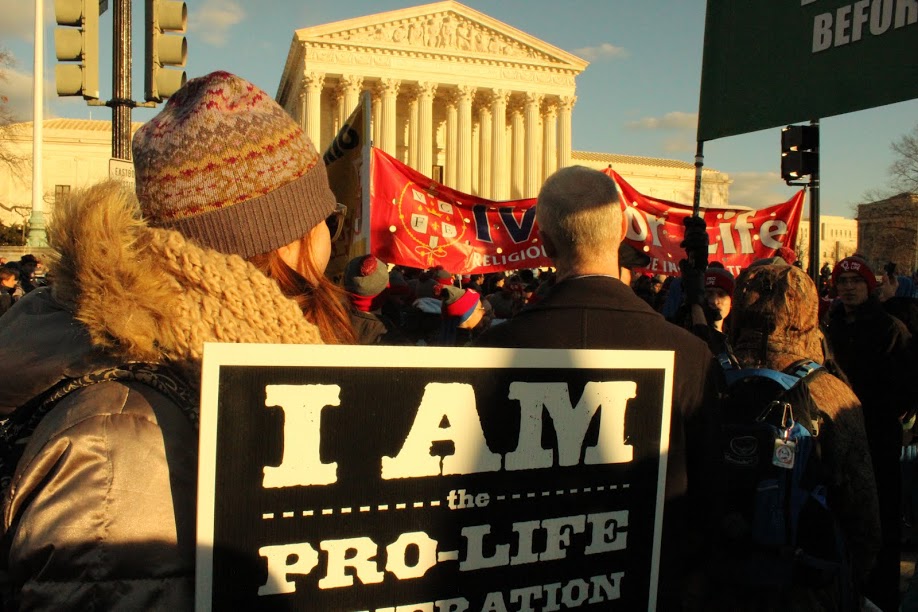 While the March for Life in Washington, D.C. actually takes place on Jan. 22, the yearly anniversary of the Supreme Court’s decision on Roe v. Wade, preparations and excitement surrounding the march begin far in advance.

Student registration for the highly anticipated event began late in the fall 2014 semester and carried into the week of the March for Life. Every seat on the nine buses was taken.

Beginning at 9:30 p.m., students checked in for the march in the lobby of Christ the King Chapel, which was brimming with participants’ excitement. They received T-shirts bearing the theme of this year’s march: “Every life is a gift.”

The students were then able to unite their hearts in prayer during a Eucharistic holy hour for the successful impact of the 42nd annual March for Life.

The buses arrived on campus about 11:30 p.m. All nine of them lined up in front of the Piazza and stretched down toward the intramural fields. After a quick roll call on each individual bus, more than 500 students, faculty and staff hit the road.

Six hours later, the passengers opened their sleepy eyes to find that they had arrived at the Basilica of the National Shrine of the Immaculate Conception for the closing Mass of the Vigil for Life.

The students had some free time to explore the shrine before Mass began, a joy to those who had never visited the nation’s capital.

The Mass was celebrated by the Most Rev. Joseph Kurtz, archbishop of Louisville, and concelebrated by many other priests and deacons, including Franciscan University of Steubenville’s very own president, the Rev. Sean Sheridan, TOR.

When the Mass was over, the Franciscan delegation gathered on the steps outside of the shrine to take a group picture, and then it was off to the National Mall for the rally.

Six hundred thousand pro-life supporters gathered in the National Mall to listen to various speakers, political and religious figures while also reuniting with other groups they recognized from their hometowns.

“I’ve been coming to the March for as long as I can possibly remember,” sophomore Kathleen Dougherty, Franciscan’s coordinator of this year’s March, said. “An important part of this is coming to refuel on your hope, to be in this place with all these people is just so encouraging.”

At 1 p.m., the march began with a rather slow start, as several pro-abortion counter-protesters were arrested in connection with obstructing the march, causing the event to run later in time than anticipated.

Following the march, students began their preparations to return to Steubenville, grabbing something to eat after a long, tiring day and shedding their many layers before re-boarding the buses.

Sheridan said, “As president of Franciscan University, it gives me great pleasure to be able to see all of our students here, standing up for the dignity of human life. Each year, there is a different theme. This year, we are recognizing that all life is a gift. Certainly the gift of our students is something we treasure at Franciscan University.”

However, as a majority of the Franciscan students present in D.C. returned to campus, a select few stayed behind to attend the East Coast Students for Life of America conference.

Eleven Franciscan Students for Life leaders joined over 2,000 other students from across the country in a day of networking, inspiration from nationally-recognized pro-life speakers and just plain old fun.

Stephanie Gray, Canadian pro-life apologist and author of the new book, Love Unleashes Life, shared an experience of discussing hard pro-life questions with an angry, frustrated student. In this particular instance, the student asked her, “What would you say to a 14-year-old girl who has been raped and is now pregnant with a down-syndrome child?”

Gray said that she realized she would need to answer this student with a more nontraditional approach. She asked the student, “Who inspires you?”

The student then went on to describe enthusiastically a boxer who had overcome impossible home-life circumstances, worked to become proficient in his occupation and sacrificed to build a life for his family.

Gray was able to show this student that people are inspirational because they have overcome the impossible through perseverance in the most hard, seemingly hopeless situations. This teen mom has the same potential that the underprivileged boy-turned- famous-boxer came to know.

Other distinguished speakers who addressed the students included Jason Jones of Movie to Movement; Robert P. George, professor at Princeton University; and Abby Johnson of And Then There Were None Ministries.

Johnson’s organization financially helps abortion clinic workers who have left the industry as well as assists them with other professional alternatives in which they can make a living in a life-affirming way. Johnson said she believes that the abortion industry will cave in on itself as more clinic workers continue to leave. Her ministry has already helped more than 200 workers leave the industry.

“Every social justice movement is defined by its young people,” said Kristan Hawkins, conference host and President of Students for Life of America. “We are the pro-life generation.”