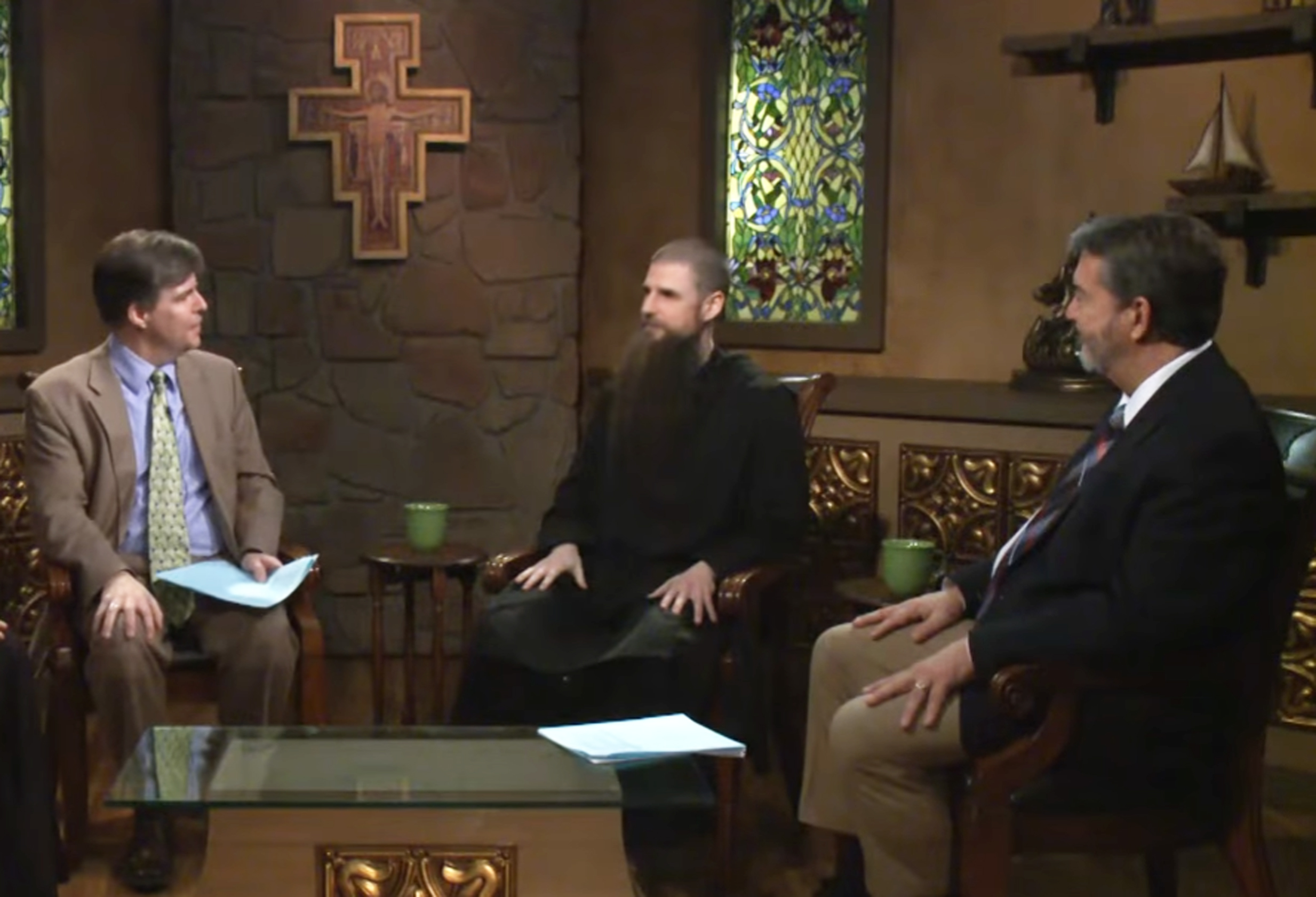 A television showed geared towards theological conversations, Franciscan University Presents is aired 12 times throughout the year on EWTN and features some of the greatest minds in the modern-day realm of theology.

Franciscan University Presents, a one-hour segment show aired on EWTN, is hosted by Mike Hernon, vice president of advancement, and paneled by Dr. Scott Hahn and Dr. Regis Martin, with a different guest speaker in each show who focuses on a certain topic for the duration of the show.

Presents is yet another idea provided to the university by the late Rev. Michael Scanlan.

“(Scanlan) was always looking for ways to promote the university and to evangelize,” said Lisa Ferguson, director of Marketing and Communications at Franciscan, “and he loved it when he could get an opportunity to combine those.”

Ferguson said Scanlan had a close friendship with Mother Angelica and had come up with idea to host a TV show at Franciscan University that highlighted some deep theological conversations.

“We have a variety of topics and guests,” said Ferguson. “Some of the shows are more basic spiritualities and some dive more deeply into spiritual topics.”

“It’s a theological discussion format,” said Hernon, who has succeeded Scanlan as host of the show, hosting Presents since 2012, “and so those who have either thought very deeply or who have written are able to allow both our panelists, two theology professors, to weigh into the conversation.”

“Dr. Scott Hahn and Dr. Regis Martin really have this breadth of knowledge they bring to this, along with our guests,” said Hernon.

Ferguson said the guests are chosen by an annual meeting between the panelists and those who work behind the scenes in the show to discuss who to bring on as a guest, as well as what topics should be addressed.

Hernon said many topics are covered, from spiritual to political to cultural, and many times they all tie back to the same theme: how Catholics can apply what is talked about to their lives.

“I think it would be a subject of interest to anyone,” said Ferguson.

Hernon said many times the program tries to choose a guest who is already scheduled to come give a talk at Franciscan, so there is a tie between what the students at Franciscan are hearing and what the show broadcasts from the campus to the rest of the world.

“It creates a great balance between this is what’s happening here, and this is what is happening out there,” said Hernon. “Usually, in that sharing … (the audience members) get a feel, if they haven’t been here before, of who we are. Therefore it kind of communicates more clearly the mission of the program.”

Oftentimes, if the topic is something of interest that they would like to delve in more deeply, Presents has a guest speaker come back.

“We don’t try to do it too quickly,” said Hernon, “but there are just some that are expert communicators and just have such important topics that we are addressing. When the topic and the individual lines up, we want to bring them back.”

Hernon continued, “We have the largest Catholic theology program with students, and we also want to elevate the conversation about faith for all of those out there.”

Not only does Presents evangelize and attract people to the campus, but it also gives a unique opportunity for students to be involved in the process of the making of the program, according to Hernon.

“The joy of Presents is that it is an evangelistic outreach, but it’s also that students are involved in all the operations, and get mentored, and can say they are part of the program, so it’s great having as any students involved as possible to help out with that,” said Hernon.

Patrick Grace, the technical coordinator of video productions, said many students help with the filming and editing of the program, thus giving themselves experience in this work field, which is open to all students to help with.

“It’s a terrific opportunity for students in any major, not just communication arts,” said Grace. “It’s a fun environment, and it’s a great learning environment for hands-on work.”