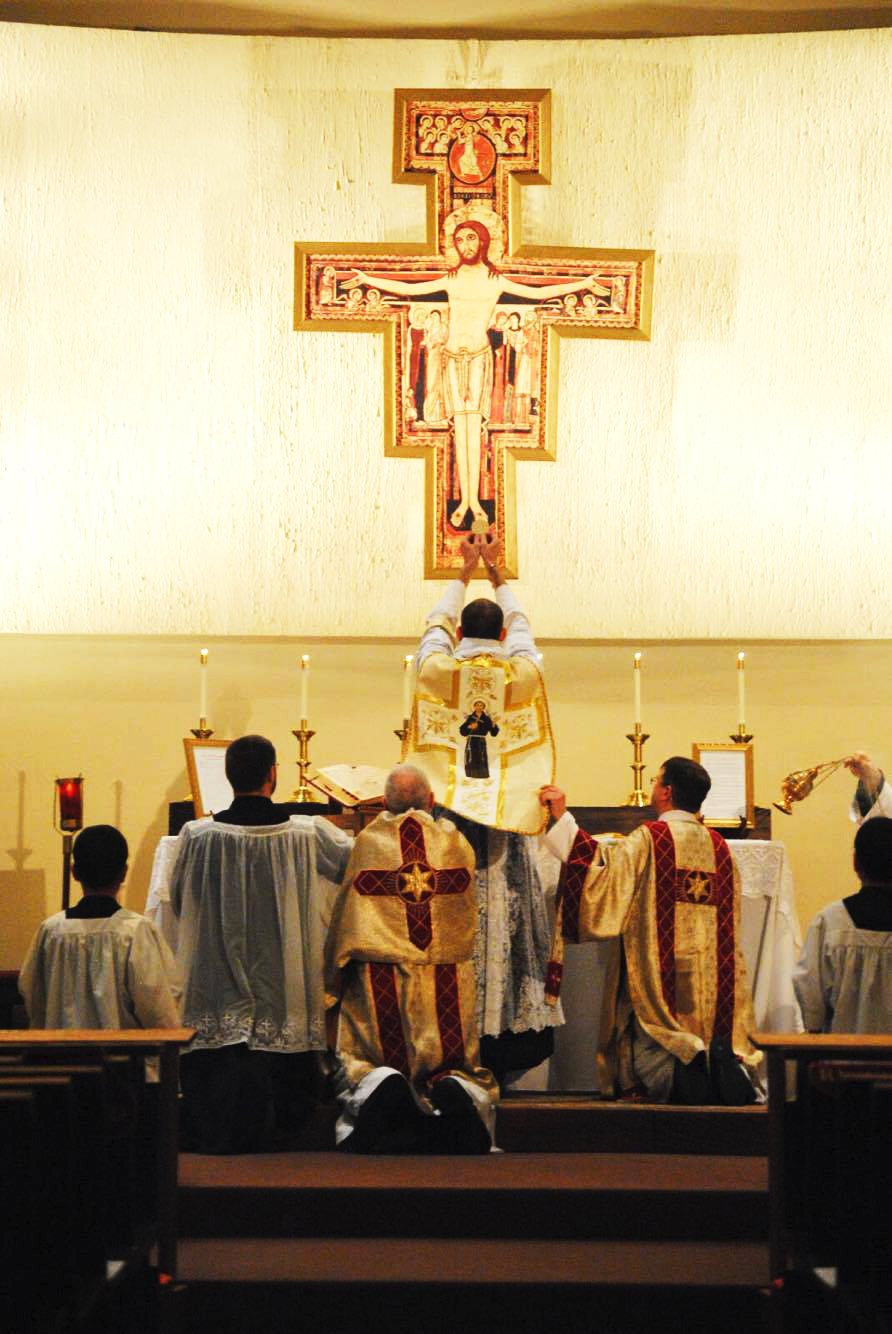 Ten years after Pope Emeritus Benedict XVI released his Apostolic Letter “Summorum Pontificum,” the Extraordinary Form of the Mass is growing in popularity across the country, including at Franciscan University of Steubenville.

In his 2007 letter, Benedict gave all Latin Rite priests permission to celebrate the Mass in accordance with St. John XXIII’s 1962 Missal. Dozens of students now attend the Extraordinary Form Masses when they are offered in Christ the King Chapel, which are celebrated by the Rev. Gregory Plow, TOR.

Plow said while the Extraordinary and Ordinary Forms are equally valid under the Latin Rite, each one is rich and “prayerful in their own unique way.” The Extraordinary Form, known  for its use of incense, the Latin language, altar rails and much more, is steeped in symbolism, which is part of the reason Plow enjoys celebrating, or as he put it, “praying” this form of the Mass.

“Celebrating the Extraordinary Form has given me a greater understanding of the tradition in the Church’s liturgy and where certain prayers come from,” said Plow, who is director of the university’s Priestly Discernment Program.

Joe Lettieri, student co-head of sacramental ministries at the Chapel, concurred with Plow, adding that many are also attracted to the Extraordinary Form by the exterior beauty it presents and overwhelming reverence for the Eucharist that it ensures.

“You can see this (Extraordinary Form) Mass going on and even if you don’t have any idea what the priest or the lay people are saying, it’s so abundantly clear that Christ is present,” Lettieri said.

Some might be surprised by the celebrating the Extraordinary Form at Franciscan, which is known as a charismatic hub in the world of Catholic higher education, but it should be viewed as a testament to the unity that both forms share.

Both Plow and Lettieri stress that one form is not more “Catholic” than the other, but rather it is one expression of the Latin Mass allowed by the Church. “It’s very important to realize that it’s the same sacrifice, the same priesthood and that they are exactly the same in substance,” said Lettieri. “It’s just that the steps we take to get there are a little different, with different exterior spirituality.”

Junior Jeremiah Poff, a frequent altar server at Extraordinary Form Masses, said he hopes that more people attend these Masses but acknowledged that their mysticism can lead to misconceptions. He hopes that the catechesis that Plow provides in his homilies will help clear those misconceptions up.

“If someone decides to try out the Extraordinary Form and they listen to (Plow’s) homily, then they might be able to appreciate the rich symbolism and gorgeous prayers hidden beneath all the Latin and ceremony,” said Poff.

At one point in time, Lettieri was someone who considered the Extraordinary Form ‘weird,’ but after going to a few Masses in that form and learning more about it, he absolutely fell in love with it.

Plow encourages students to “stretch” themselves to experience different forms of prayer, including the Extraordinary Form, and uses an example from his time as director of household life to make his point.

While he was director, Gaudate in Via Crucis Household made it a point to attend Extraordinary Form Masses and the charismatic Festivals of Praise so that they could learn about both “traditional” and “charismatic” forms of praise, which Plow said shows the unity between the two movements.

Plow will celebrate a Solemn High Mass for the Feast of Christ the King on Oct. 29 and hopes that students come to experience this special liturgy.