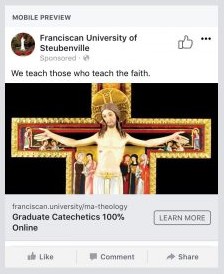 The post read “We teach those who teach the faith” and featured a picture of the famous Franciscan cross. In a blog posted to the university’s faculty page, Tom Crowe, web communications director, wrote that the ad was rejected by Facebook because the image showed “shocking, sensational or excessively violent content.”

Upon learning of the advertisement’s rejection, Crowe began an extensive campaign to highlight the irony of Facebook denying the post on Good Friday, the day of Jesus’ passion. In an email to The College Fix, Crowe said that he has had posts rejected before, but for containing too much text, not because of its content.

“This is the first time an image of Christ crucified has been rejected,” Crowe told The College Fix.

On Facebook, both ads and regular posts can be removed for questionable or offensive content. However, Crowe said that the difference is that a post can only be removed if a user reports it, whereas Facebook itself makes the decision whether to approve or reject an ad.

In an interview with WTOV 9, Crowe said that this made it all the more questionable.

“This was Facebook itself saying that’s no good without anyone reporting it,” Crowe told the station. “Facebook said that’s too violent, that’s too shocking, that’s too sensational.”

Fox News radio host Todd Starnes was the first to pick up the story and several more media outlets followed suit, including Catholic News Agency, The Daily Wire and The College Fix. Facebook, however, did not issue an apology or respond for comment until Fox News covered the controversy on April 4, five days after the rejection occurred.

A Facebook spokesperson told Fox News that the rejection of the San Damiano Cross was a mistake and that the ad would be approved as it did not violate the company’s ad policies.

Crowe told Fox News that he didn’t believe this was an instance of “systemic religious bigotry” by the social media giant, but that it seemed like a Facebook staff member did in this instance.

“Facebook approved other ads with the exact same image, which leads me to believe it wasn’t an algorithm, but was a low-level staffer who skims many, many ads and just had something personal against this one,” Crowe said.

The ad has since been approved and Crowe told Fox News that he hopes this will be a learning experience for people.

“I hope people take another look at the cross and see what God did for us,” he said. “Whether it’s a return to faith or an investigation of this weird thing called Christianity.”