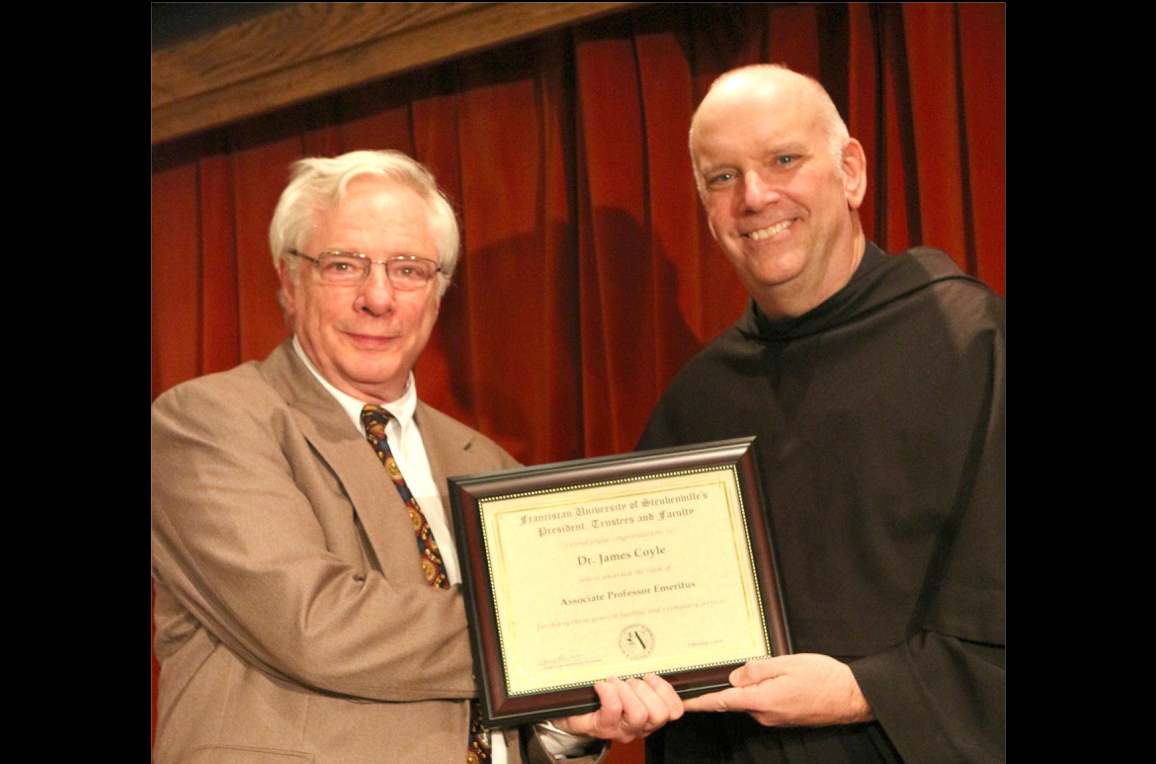 Together with the three awards of excellence given during the faculty reception on Feb. 1, a beloved Franciscan University professor of 33 years was awarded the status of associate professor emeritus.

James Coyle, who officially retired from the university in spring 2015, was named associate professor emeritus for his many years of service to the university, both in and out of the classroom. Coyle founded and developed Franciscan’s communication arts department and worked as the inaugural director of “Franciscan University Presents,” the university’s television program that airs on EWTN.

The faculty awards program was instituted two years ago by Jonathan Sanford, who holds a doctorate in philosophy and is a former philosophy professor at Franciscan University, to recognize academic excellence among Franciscan faculty in the areas of teaching, scholarship and service.

“This gives us an opportunity to showcase … some of the excellent things (members of the faculty) are doing,” said Paul Symington, director of scholarly excellence who holds a doctorate in and is a professor of philosophy at Franciscan University.

Last year’s awardees comprised the committee who selected this year’s recipients of the awards, who were submitted for consideration by fellow colleagues.

The two directors who oversee the awards process are Symington and Kaybeth Calabria, who holds a doctorate in education and is the director of excellence in teaching.

Symington said that one thing evident in the midst of the award applicant vetting process is just how diverse Franciscan University’s faculty is.

“You don’t really realize (the diversity) until you sit down and look at all of these different things that each faculty (member) is doing,” said Symington, who said he likes to characterize members of the faculty as ninjas, because of the way they exemplify a professional atmosphere as a teacher as well as gaining many accomplishments outside of the classroom.

Symington said that the title of emeritus is recognition of a permanent status affiliating the retiree with the university which “comes from many years of service to the university after someone retires.”

The latest recipient of the honorary title, Coyle, said that while he had an “inkling” about the intention behind his invitation to the awards ceremony, he did not find out that he was to receive emeritus status until about an hour before the award ceremony when someone unintentionally informed him of the reason for the reception.

“I very much appreciated the honoring,” said Coyle about the reception of the emeritus status.

His wife, one of his sons, daughter-in-law and grandchild were able to attend the award ceremony with Coyle.

Even though he is officially retired, Coyle continues to teach a night class on podcasting, which he said is one of the topics he enjoys most.

He said that one of the reasons he returned to campus to teach after retirement is because he missed the interaction with the students.

“I have found … teaching always to be strange animal in that most of the time I can’t see the results,” said Coyle. “Long term, I have no idea what effect my time together with students has on their lives. … There is a lot of faith involved in teaching.”

Alongside his love of the classroom, Coyle spoke fondly of his time serving at the Steubenville Conferences during the summer months for more than 20 years.

“It was great being part of a larger family,” said Coyle, about the work devoted to summer conferences, “not just the academic side of things. It was a lot of fun for me in the summers to work with students as coworkers.”

Coyle said that he did not retire with a specific plan in mind.

“I didn’t have another thing to go to,” said Coyle. “I’m still kind of in a discovery mode.”

According to a press release, each awardee received a certificate and a monetary award.