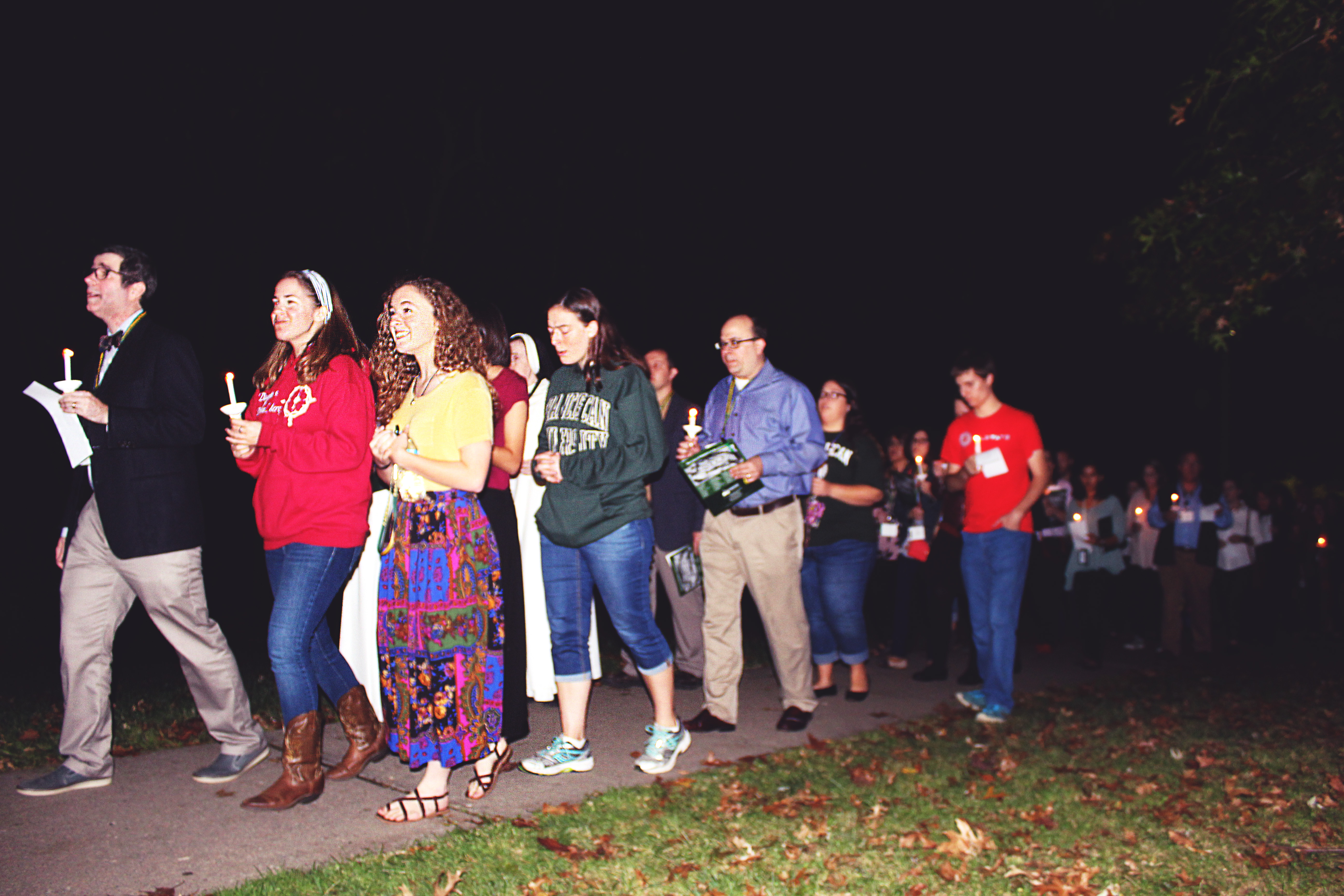 On Oct.13th, 1917, before hundreds of skeptics and passionate Catholics alike in northern Portugal, the sun danced. One hundred years later, on Oct.13th, 2017, students and faculty alike commemorated the events of Fatima, through a novena, procession and subsequent consecration.

The Rev. Nathan Malavolti, TOR, himself a visitor to Fatima for the onset of the Church’s centennial celebration of the Virgin Mary’s 1917 springtime apparitions, aims to remind campus of the event’s simplicity. “Our Lady came to Fatima just to tell people to return to living for her Son, to live a life of conversion” he said. “It’s that simple. As Franciscans, it’s about ongoing conversion. She felt the world was leaning away” said Malavolti.

The past weeks have been characterized by a collective recognition of Fatima’s importance on campus. From an installation by the Rev. Shawn Roberson of a special Our Lady of Fatima statue within Christ the King Chapel, to an Our Lady of Fatima Novena Prayer recited before the onset of every campus Mass, to a commemorative procession and consecration from grotto to chapel on the centennial, efforts concerning Fatima’s importance have influenced all.

The ever-smiling friar then expounded upon the importance of the events at Fatima, with specific regard to the university’s Franciscan calling. Malavolti said, “It’s the blessing of being at a Franciscan school. It’s part of our Third Order Franciscan way of life to have this devotion.” He also said that our calling to reach Christ through Mary should parallel St. Francis’ own dedication to the Blessed Mother.

In order to “take in this moment, to honor Mary on such a significant anniversary of her appearing,” said Malavolti, is to experience the call of the Church “back to her roots, back to prayer.” Fatima remains important, said Malavolti, largely because “Mary is both a model of and the mother for the Church. She is the queen of the new evangelization.”

“A lot of people, when they think of Fatima, they wonder if the Church is going through a testing time” said Malavolti. While this understanding, often in direct conjunction with the third secret of Fatima, is certainly a facet of Mary’s message, Malavolti said the main message remains one of hope and of simplicity.

He said, “This was her own way of saying that it’s time to repent, it’s time to live for my Son. She called the Church to live who Christ calls us to be.” In what Malavolti calls a “basic, primal message,” Mary’s call at Fatima essentially requires the Church to again recognize her as queen and as mother.

To reach this realization, Malavolti suggested that students make use of concrete methods by which to deepen respective relationships with Our Lady of Fatima. “Mary wants to accompany us as we walk through the joys and the sorrows of our own lives” he said. This invitation of Marian closeness is best manifested in items like daily rosaries, Marian consecrations and litanies, all of which “show our explicit love for our Blessed Mother,” said Malavolti.

In citing Pope Saint John Paul II’s inspiration of his own vocation, Malavolti holistically stressed the importance of the rosary, an act which, together with Marian consecrations, allow our lives to exist “for Jesus through Mary.”

“Mary wants us to yearn for her son in heaven,” Malavolti said with a smile. He provided a few self-directed questions which all can employ to easily gauge their own openness to Our Lady of Fatima, among them “Where is Mary in my walk of faith?”

Together with 55 other pilgrims, Malavolti frequented Fatima this past May, in commemoration of the 100-year anniversary of the first Marian apparition. Now, as the centennial celebration of the final apparition fades onto the past, Malavolti said that as we “take a moment to celebrate this special day,” we also recognize the insatiable, unfathomable love that Mary continues to pour our upon believers.

That love, Malavolti said, is at the heart of our commitment. His admission regarding the wonderful mysteries of Fatima says as much: “That’s what gives me strength.”