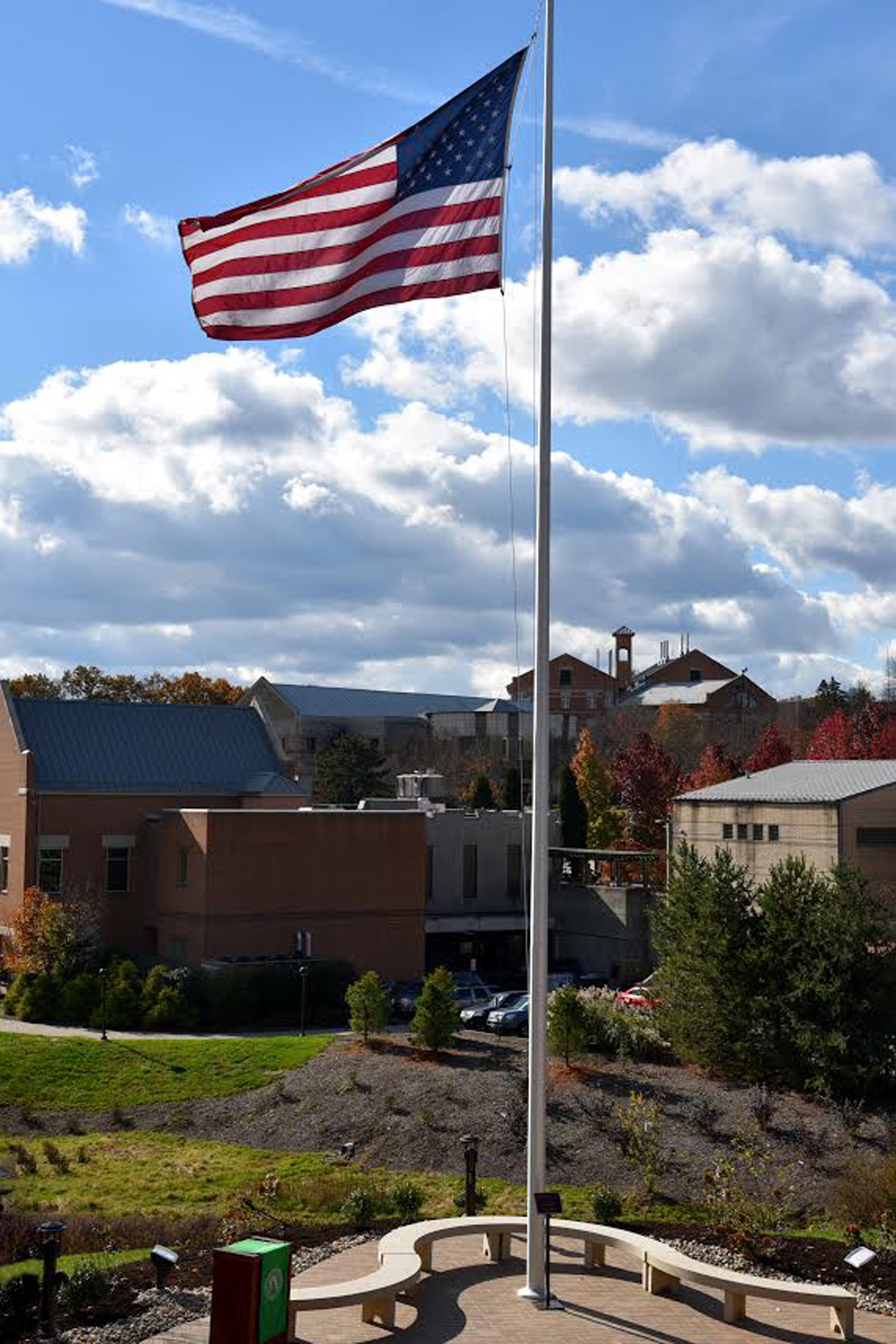 Over 100 people, including more than a dozen veterans, gathered at the Veterans Flagpole Memorial Dedication ceremony on Veterans Day, Friday, Nov. 11.

The flagpole, which is located at the base of the stairs adjacent to Ss. Louis and Elizabeth Halls, is surrounded by rounded benches and a new memorial plaque, which was unveiled Friday.

Chris Ice, director of major gifts at Franciscan and the son of a World War II veteran, gave the opening remarks. Addressing the veterans in the audience, Ice said, “Your great example is what Franciscan University is all about: service to country, community, and the world.”

Senior voice major Madeleine Appleby sang the national anthem, followed by the raising of the flag by Franciscan’s ROTC.

The Rev. Dan Pattee, TOR, gave the invocation and opening blessing. He shared a Veterans Day prayer, calling upon God to “bless our veterans, these men and women of courage and valor.”

After the opening blessing, Ice welcomed veterans and College of Steubenville alumni Ray Challis and Dan Schmidt, both of whom gave memorial remarks. Challis and Schmidt are members of Tau Kappa Epsilon fraternity, which sponsored the flagpole memorial project.

Schmidt said, “We come to pay homage, with the utmost humility, to our veterans, who would put themselves willingly between us and those who would do us harm.”

Challis and Schmidt also unveiled a new memorial plaque, which stands at the base of the flagpole to commemorate veterans who attended Franciscan University and the College of Steubenville, Franciscan’s former name.

Sand from Normandy, France, where the the largest amphibious invasion in history took place in 1944, was placed in the concrete base of the flagpole. A World War II veteran and Franciscan graduate gifted the sand to the memorial to ensure the strength of the base, Ice said.

Patten then read a roll call of Franciscan University students and alumni killed in action. Members of the Veterans of Foreign Wars (VFW) Post 232 from Amsterdam, Ohio, carried out a 21-gun salute in honor of fallen veterans.

Tom Clasby, president of the Alumni Association and a member of the class of ’95, acknowledged the “humility (that) is so typical of those who served,” thanking the veterans present for their service. Veterans at the ceremony served in a number of wars and conflicts, including the Korean War, the Vietnam War, and the Iraqi and Afghanistan wars.

Pattee concluded the ceremony with the Last Soldier Prayer.