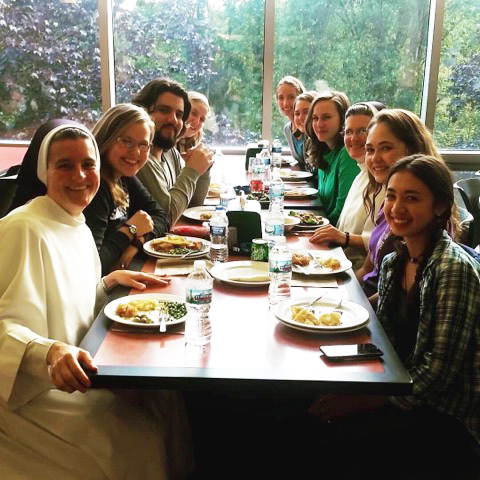 A group of 26 students are beginning to feel more at home at Franciscan University after transferring from Aquinas College in Nashville, Tennessee, at the beginning of the semester.

When Aquinas College announced earlier this year that they would only be offering education degrees beginning in the fall of 2017, up to 140 students were left in need of a school to transfer to.

Sophomore nursing student Katia Gyetvai said that the Dominican Sisters of St. Cecilia, who run the college, sat all the students down and told them that the college had been struggling financially for years and were unable to continue functioning with a full program.

Sarah Hoover, a junior nursing student, said the initial reaction for all the students was just a state of shock, as they realized they wouldn’t been spending the next few years with their friends as they had planned.

The college, which receives no money from the federal government, relies entirely on benefactors and student enrollment. Despite recent efforts to increase enrollment, including the construction of a $9 million residence hall, the college was not able to meet their goals.

In order to help the students find an institution to continue their education, Aquinas held a college fair and invited several schools that were willing to give students a generous financial aid package to help with the transition. Among those was a group from Franciscan University, who offered generous financial aid packages to students, trying to match what they had received at Aquinas.

Hoover said that for most of the students, choosing which school to transfer to depended heavily on which schools would accept the most credits and would be able to give scholarships. Franciscan University was one of only a few schools that was willing to help students graduate on time while also providing those much-needed scholarships.

Junior business management major Mary Brewer said that Franciscan was the only school she felt drawn to, a sentiment that was solidified by the compassionate way that the university tried to help students make the transfer.

“They were very understanding and they prayed for us to know God’s will, so I felt very at peace making the decision to come here,” said Brewer.

Transferring to a school with a Catholic identity similar to that of Aquinas was also an important factor in the students’ decision, said Hoover.

Gyetvai said, “It’s nice that I can still grow in both my faith and academic lives, without compromising one or the other.”

While the transfer was easy, it was still hard for many of the students to leave the tight-knit community which they called a second family. Last year, Aquinas College had just 257 students, just 12 percent of Franciscan University’s enrollment, according to the university’s 2016-17 factbook. Because Aquinas was so small in enrollment numbers, students were able to grow deep bonds with one another. When everyone was told they would have to be separated, it hit home especially hard.

“It just felt like I had so many relatives at the school,” said Gyetvai.

What helped, according to the students, was having so many of their friends come to Franciscan with them.

Of the 26 students who transferred, five are currently in Austria while the other 21 are spending their first semester on main campus. This has allowed for the transfer students to adjust, said Hoover, because they didn’t have to start from scratch – they already had some friends that would help make the transition easier.

Halfway through their first semester, the former Aquinas students are still adjusting to life at Franciscan University, but they are grateful for the opportunities that Franciscan has provided them so far.

Sophomore nursing student Arianna Fouch has added a minor in sacred music, which was not an option at Aquinas. Fouch and Gyetvai also jumped at the opportunity to play intramural sports, another item they hadn’t had the chance to do at Aquinas.

The memories and relationships that the students made while at Aquinas will always be with them, and while it is still a hard transition to be making, they are all grateful to be at Franciscan and know the people here.

“The people at Franciscan are what I like to call ‘kindred spirits,’” said Becker. “They are wonderful, beautiful people … and have all welcomed us with open arms.”