Founder of HCC department to retire after 32 years 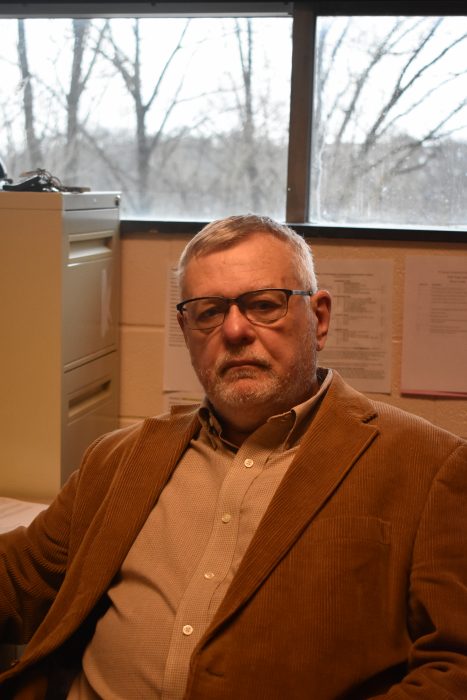 Reflecting on his 32 years teaching at Franciscan University of Steubenville, the founding director of the humanities and Catholic culture (HCC) department remarked, “It went pretty fast.”

James Gaston, who holds a master’s degree in history and a doctorate in 19th and 20th century European intellectual history, will be retiring at the end of the spring semester.

“A good teacher’s job is to stand there,” Gaston said. “What I do is watch their faces. I’ll try two or three things until I get a number of faces in the class going ‘yeah, I get that.’”

Gaston came to Franciscan through his friendship with Stephen Krason of the political science department.

At the time of his hiring, “I was at another job and was probably going to go down to Washington,” Gaston said.

However, he received an offer from Krason to teach the as-of-yet unborn HCC program at Franciscan. After taking some time to consider the offer, “I came and tossed my hat in the ring,” he said.

The program was already largely put together at the time of his arrival, but it faced a few hurdles in the beginning.

“It’s one thing to suggest students are going to take 76 or 73 required courses,” he said. But it was another thing to make that plan work.

Speaking about the early days of the HCC major, Gaston said that he saw it as his job to breathe life into the program.

“You can have all the ingredients you want on a table or on a countertop, but a chef or a cook has got to take it all and mold it,” he said.

He saw the program as something very much needed in higher education. He said, “We haven’t in the last 70 odd years seen a really rigorous integral Catholic liberal education.”

Gaston saw the HCC program as a vital way to help students form a solid understanding of the world around them. He said this common theme in the HCC program traces its origins back to medieval Catholic education.

“There’s a reason why they call it a university,” he said.

Speaking on his philosophy teaching, Gaston said, “What I tried to do was make sure students see how all the various disciplines are rooted in a metaphysical reality of nature.”

Stressing the value of an all-encompassing education, Gaston said there has to be a foundational grounding in education, as it helps students “intelligently discern why people in a culture act the way they do.”

Gaston noted with pride the great successes his students have had after graduating with an HCC degree. He highlighted many priests, nuns, lawyers and teachers, among others, who have come from the program.

“It’s been an amazing thing to see what they do,” he said.

Gaston said he does not know what will happen to the HCC major after his retirement. However, he said the faculty is dedicated to keeping the program going.

“It depends on the next person who runs it and, most importantly, teaches it,” he said.

In his retirement, Gaston hopes to do a bit of traveling in the winter months with his wife.
He also hopes to write a book on the English scholar Christopher Dawson, whose work in multiple fields heavily influenced both the structure of the HCC program and Gaston personally.

“Very few people have read all of Dawson’s books,” he said. “I’m going to try to introduce people to the whole body of work, which is not easy.”

Gaston mentioned a few other writing projects he wants to work on in addition to his book on Dawson.

“I wanted to publish more, but working full time, raising eight kids and maintaining five acres, I never had time,” he reflected.