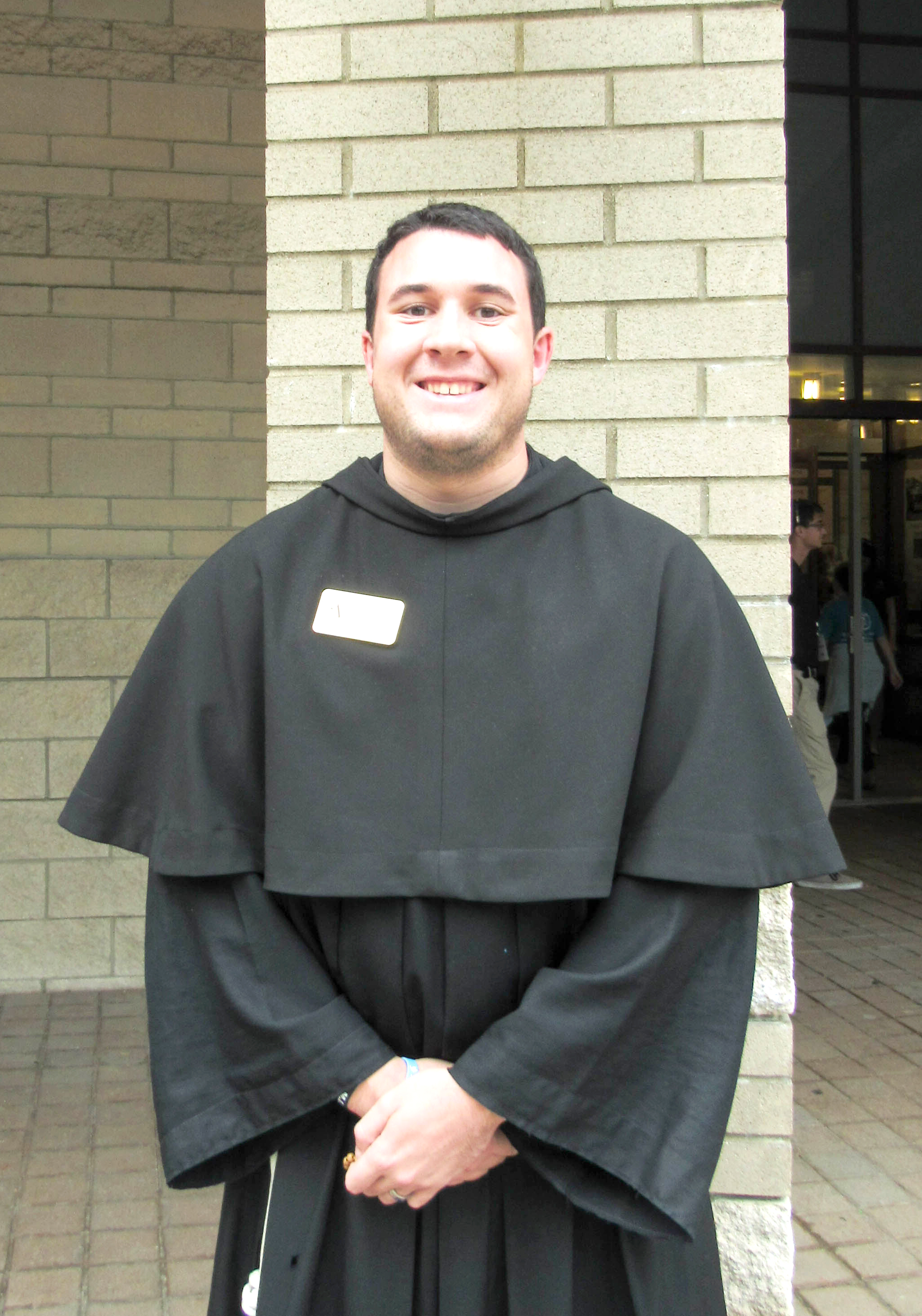 He enjoys creating music and cooking food; he likes to exercise and watch “super” movies and the shows “The Office” and “Parks and Recreation.” He is a fan of coffee, and he wears a habit. Brother David Dodd, TOR, has happily returned to Franciscan University five years post-graduation to serve the community during his Apostolic Year. “Franciscan’s a wonderful place,” he said.

Dodd, who is currently in one of his final stages of discernment, began looking into the priesthood at a push from an unlikely source. When Dodd was in high school, he worked at a pizzeria with an atheist/agnostic co-worker who was a fall-away Catholic. “As we were working, several times he said, ‘You know, you’d make a really good priest.’… This guy doesn’t believe in the faith at all, but he’s saying this stuff, and I guess after a while I kind of saw that others see something in me that I didn’t quite see in myself at the time,” said Dodd.

Dodd was educated by the Dominican Sisters in Nashville, where he grew up, and in 2008 he came to Franciscan as a freshman. “Prior to coming here, I didn’t know that Franciscans actually existed. … My understanding of vocation was very limited to Dominican Sisters and diocesan priests,” said Dodd.

“I remember I was here as a freshman at a Festival of Praise and just praying like ‘Okay God, I’m open to whatever you want.’ And He said, ‘I want you to discern the priesthood.’ I said ‘No, I don’t want to do that,’” said Dodd, explaining that he eventually conceded to God. Despite his plans to join the Priestly Discernment Program, Dodd got cold feet and declared a dual history and education major at the end of his fall semester.

“Christmas Day, I said ‘Okay God, if You want me to be a priest, make this really, really clear to me,’” Dodd said. He also asked God to make it clear that he didn’t like education or history classes. By the first week back in the spring, Dodd found he was disliking the classes for his major, and he joined the PDP the next semester. “God works in funny ways sometimes,” he said.

Dodd graduated from Franciscan in 2012, and from there he went on to join the Franciscan friars. He has spent the past three years in seminary at the Catholic University of America. “It’s been a lot of receiving information and receiving about the faith, and now it’s a year of giving all of that,” Dodd said. “This year is a year of discernment, and it is a year of ministry.”

Dodd was sent to Franciscan to spend his apostolic year providing pastoral care for the Works of Mercy, a task well-suited for him, since he was very involved with the mission trips during his time here as a student. “My job is kind of doing formation with them,” said Dodd, “trying to help them incorporate spirituality into their ministry and empower them to bring that to the people that they serve and the people that they bring from this university as leaders. So it’s a lot of formation and servant leadership.”

While preparing students for Works of Mercy, Dodd is also a role model for people discerning their vocation. Dodd stressed that people should not be afraid to “make mistakes in figuring out what God wants from you,” likening discernment to the story of Jonah, who made a mistake against God’s plan for him but got back where he needed to be in the end.

“One of the things I’ve discovered in the last five years in community is that vocation is an ongoing thing, so we’re always preparing for our vocation, and action produces clarity. So discernment is not just a head game, it’s not just, ‘Oh I think God wants me to be a priest;’ it’s going out there and taking a step and seeing what it’s like. And sometimes for people it could work, sometimes it doesn’t, but it gives people a sense of where God is calling them or where he’s not calling them,” Dodd said.

After his year here, Dodd will leave Franciscan, but he will go on joyfully to make solemn vows with the Franciscan Friars in the fall of 2018 and then be ordained a priest later that same year.