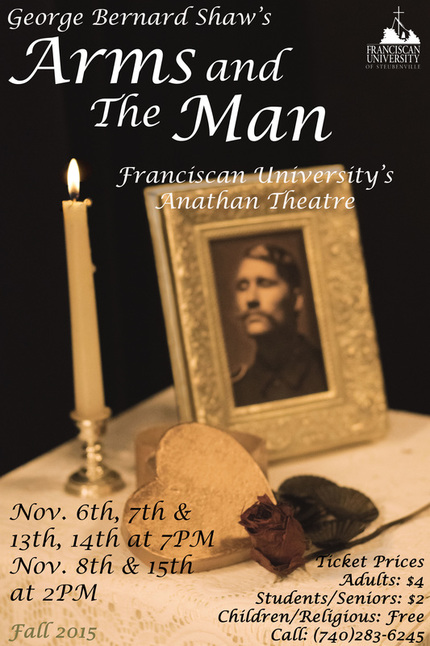 Any individual approached by student-actor Brady Webb, who portrays Major Paul Petkoff in Franciscan University’s production of “Arms and the Man,” should take no offense when addressed as “you butterfingered donkey.” He is only practicing his lines.

Franciscan’s drama department’s effective transformation of “unspeakable fulfillment” into “a cruel imposter of a world” met with applause in its latest production, “Arms and the Man,” an adaptation that would render proud even original playwright George Bernard Shaw.

Per Shaw’s original specifications and tailored by Dr. Monica Anderson, professor and chair of the fine arts department, the play consists of the Bulgarian perspective during the conclusion of the 1885 Serbo-Bulgarian War. Through the play’s complexity of combat and the frivolity of love, Shaw manipulated order to highlight social folly comically.

Anderson said, “Shaw critiques misguided idealism, the glorification of war and the artificiality of class distinction” within a facetious context.

The production itself provided indirect social commentary by way of its characters. The Petkoff residence, that of Major Paul and Catherine Petkoff along with their 23-year-old daughter, Raina, was one characterized by views regarding social hierarchy and prospective love consistent with the times.

The family’s middle-aged servant Nicola effectively summarized such views in a dialogue with Louka, a fellow servant to whom he is engaged.

That place, for Raina, is in the arms of Major Sergius Saranoff, fresh off a military victory on the front. However, his untimely romance with Louka, coupled with Raina’s own budding affections for Captain Bluntschli, a Swiss professional soldier, who is fighting for the Serbians, complicates an already strained household.

With showings Nov. 6- Nov. 8, then again from Nov. 13- Nov. 15, “Arms and the Man” allows audiences to experience authentic British theatre, simultaneously allowing actors to immerse themselves into a world of imagination.

That actor experience, said Anderson, represents the true motive behind such works.

“While we certainly consider the shows that we do to be a service to the university and local community, our first priority is the education of the students who participate in our shows,” said Anderson. “Our productions are our best opportunit(ies) to put into practice all of the skills that the drama student learns in the classroom.”

Such experience, continued Anderson, allows for a unique collaborative and educational environment, one creating “something beautiful that they can then share with others. Participating in a theatre production, and particularly this theatre production, has been an exercise in creativity, collaboration, vulnerability, courage and very hard work.”

Ultimately, the production allows students to connect not only with theatre but also with faith.

Anderson stressed the importance of constant connection to holiness.