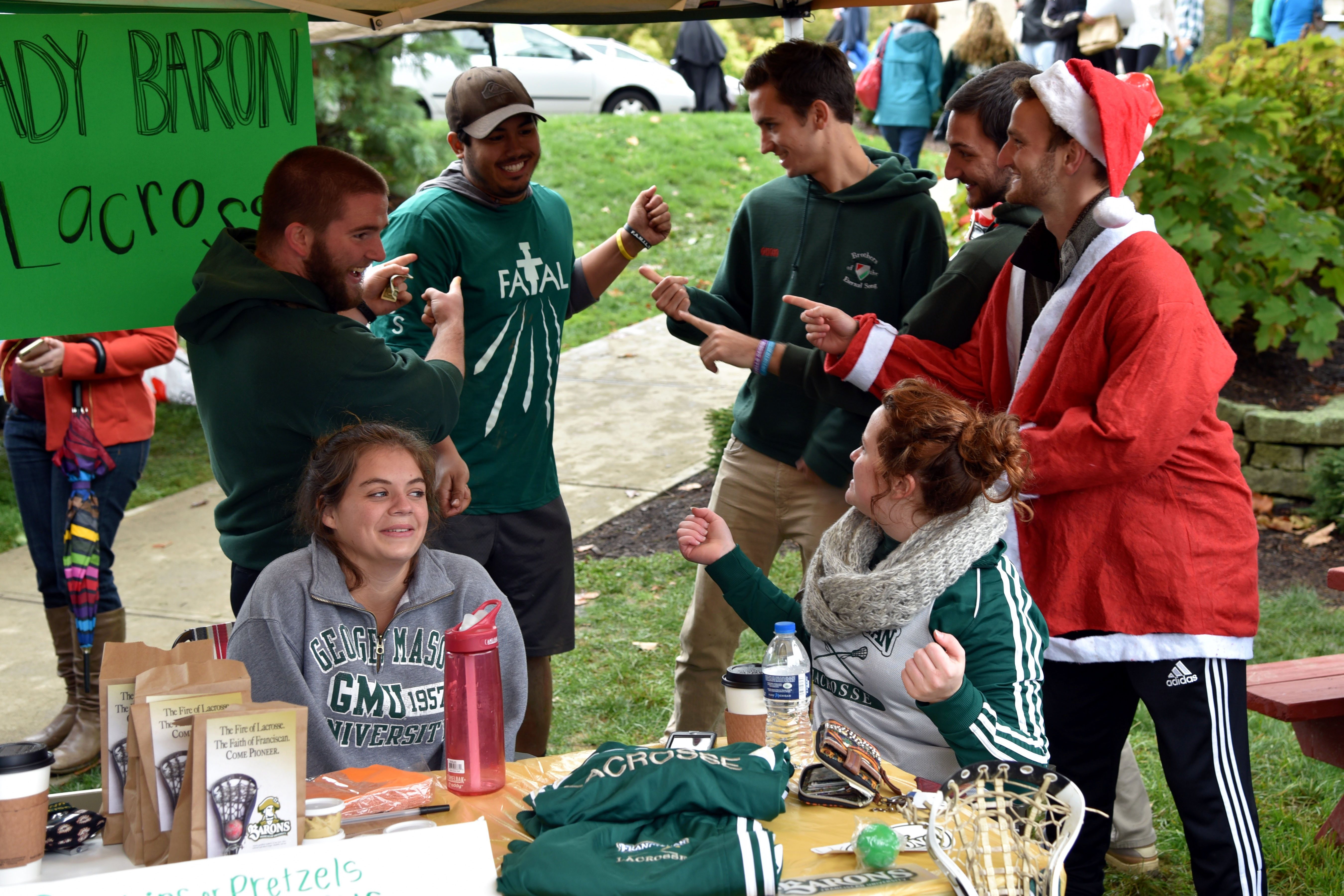 Despite the rainy weather, students, alumni and their families came together to celebrate in the spirit of St. Francis for the 2015 homecoming weekend at Franciscan University.

As is the tradition at Franciscan, the weekend was celebrated in Renaissance style, reflecting the life and spirit of St. Francis.

The enthusiasm of the students and community was shown through the way they celebrated homecoming, ranging from the talent show to the children’s medieval costume competition, sports, prayer and, of course, the St. Francis Festival.

The big highlight of Friday night was the talent show put on by Franciscan students and sponsored by Exc!te. There was great variety in the acts, which included singing, dancing, music, a standup comedian as well as a yo-yo routine set to “The Only Way I Know” by Luke Bryan.

Francis Donovan, father of sophomore Troy Donovan, said, “I loved the variety from classical music to NSYNC to country music to the barbershop quartet; it was terrific.”

The barbershop quartet, Chords of Babylon, sang the country music song “Sold” by John Michael Montegomery and was well-received by the audience, who screamed for an encore. The quartet’s encore was “Go the Distance” from the Disney movie “Hercules.”

The last act of the evening was a Disciples of the Word dance to the song “Tearin’ up My Heart” by NSYNC. This was the third year the Disciples performed an NSYNC routine.

John Redmond, a senior and member of the household, said, “I was just really thankful for the performance. I had a lot of fun. I think the audience really enjoyed it.”

On Saturday at 10 a.m. the 40th Anniversary Household Life Mass took place. Before Mass, there was a blessing of the household banners and a video message from the Rev. Michael Scanlan, TOR, founder of households.

Mass was celebrated the Rev. David Pivonka, TOR. Pivonka is a Franciscan alumnus and former director of pastoral ministry for Residence Life from 1994-1995. As director, he was in charge of household life.

Later that evening in Christ the King Chapel, the Transitus prayer service took place in memory of St. Francis’ passing from this world into the next. The chapel was packed with people honoring the namesake of the university.

Afterwards the Festival of Praise took place in the Finnegan Fieldhouse. The theme for the evening was “Chosen by the Father.”

Elizabeth Hernandez, a sophomore, said, “I love FOPs. I get a different experience out of them every single time, and every time it’s just what I need at the moment, and I feel like it’s a really good way that God comes to us at the moment. The priest brings Jesus to you, which is representative of how he brings Jesus to you in his words and actions.”

Sister Theresa Maria, TOR, said, “‘Chosen by the Father’ is what tipped me into coming. … Whatever happens is chosen by God for me and … it is chosen for me because he knows how I will respond.”

On Sunday afternoon, students and families lined up on Sunset Boulevard for the annual Life Chain. Students held signs reading, “Vote Pro-Life,” “Life is Good” and “Abortion Kills Children,” while the younger members of the group stood holding signs that said “Save the Babies.”

Among the tents filled with vendors selling crafts and food, students and visitors could be seen dressed in costumes as if from another time. Among them were Flynn Rider and the Dread Pirate Roberts. There were also knights and princesses all around.

Children in costume could take part in the children’s costume contest hosted by household Crown of Creation as a fundraiser. The children could also take place in activities, such as designing their own Robin Hood hats or getting their hair done at different stations in the Kid’s Kingdom Crafts.

The students of Tomato Theatre put on the comedy “St. George and the Dragon.” The chapel amphitheater was filled with laughs from the audience as St. George, receiving help from little kids, took on the dragon with water balloons and nerf guns.

A strong presence during the weekend was that of the alumni. Alumnus Mike Amsberry, class of 1986, said, “Although I was born and raised in Oregon, my soul was born and raised here (at Franciscan). It is really good to come back. Lots of great memories, a homecoming really.”

When she transferred to Franciscan, alumna Ilene Amsberry said, “It was the first time I felt like I could be my authentic, faith-filled self.”

She continued, “I feel proud to bring my kids here, and I’m praying that they will decide to come here.”

On Friday night, the alumni gathered together for a reception and awards ceremony. Jason Evert, class of 1997, known to students on campus for his work through the Chastity Project, was a recipient of one of the awards.

On Saturday at 8 a.m. the Kelly Roggensack Memorial Races took place. Roggensack was a Franciscan student and a member of the cross-country team, who passed away in 2008. Every year the race is run in her memory.