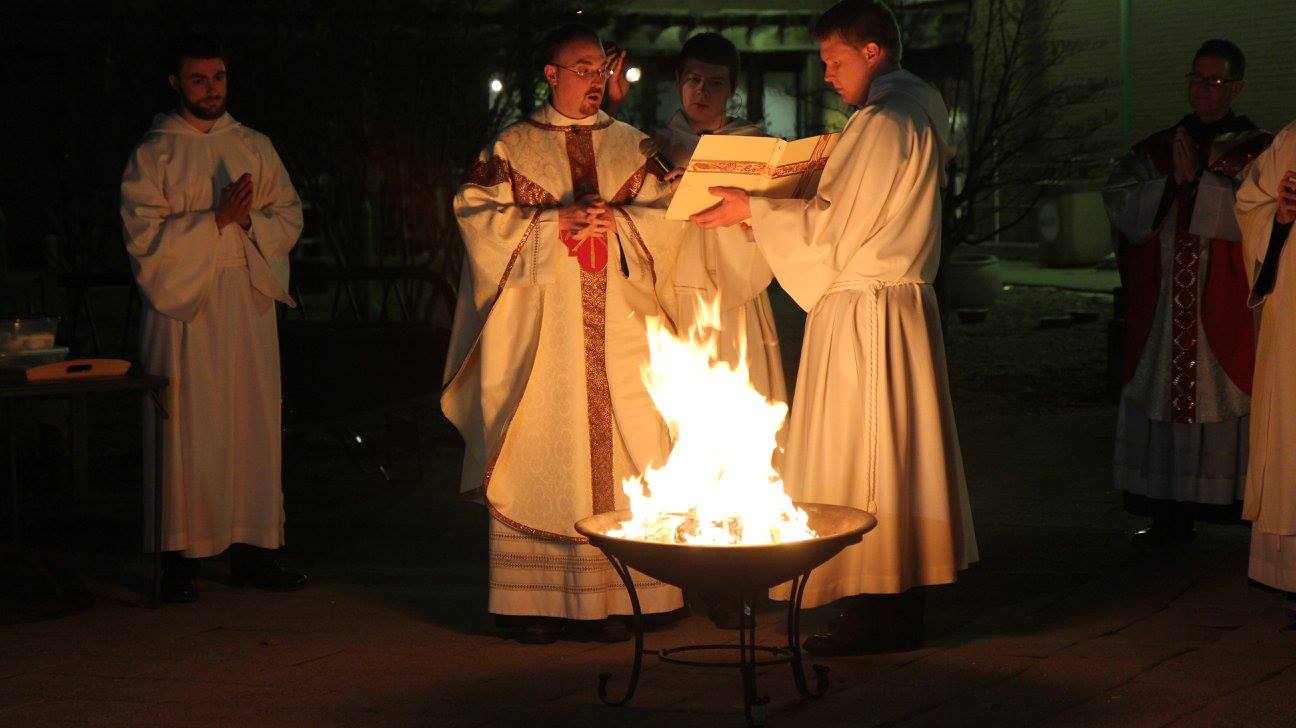 Every year in Steubenville, Franciscan University celebrates Easter a little bit differently than traditional celebrations. This year was no exception. From Tenebrae through the Resurrection Party, Holy Week was packed with unique events and faith-filled opportunities for students and their families.

Preparation for the Triduum began Wednesday night in Christ the King Chapel at 7 p.m. with the Tenebrae service. Tenebrae, Latin for “shadows,” is a service in which readings and psalms are chanted while candles are extinguished one by one, leaving the church in darkness.

Franciscan’s Tenebrae was led by nearly 30 choir members, split into two groups, who alternated in reciting Bible verses. After each set of three readings was chanted, an altar server blew out a candle until the chapel was completely dark, a reminder for the congregation of Christ’s passion.

Freshman social work major Cara Babineau, who has sung previously at Tenebrae services, appreciated the reverence of the event. She said, “I love how solemn Tenebrae is. It is a great way to prepare for Holy Week.”

Tenebrae concluded with everybody leaving the chapel in silent reverence.

Holy Thursday Mass, which took place in a completely filled Finnegan Fieldhouse at 7:30 p.m., was a reminder of Christ’s last supper, including the washing of the feet and a Eucharistic procession through the pouring rain.

This Mass, celebrated by the Rev. Dan Pattee, TOR, was attended by students and families alike. Pattee delivered a homily using an iPad as a prop to show that people need to be more attentive to real presences in their lives rather than the material world. Before the Eucharist, he also washed the feet of 12 men from the Franciscan community.

Good Friday began with the Living Stations at 9:30 a.m. in Christ the King Chapel. Unlike other performances of the Living Stations, Franciscan students acted out each station, rather than standing frozen in place during reflections. There were crowds jeering, soldiers whipping and Mary weeping. Jesus, played by Pavel Federoff, was also more graphically portrayed than in traditional Living Stations. He was covered in blood and whip marks.

Freshman communications major Molly Babcock appreciated the different way Franciscan choose to depict Jesus. She said, “It was more graphic, with all the blood, but that just made it more powerful.”

This lifelike and stirring performance did not happen overnight. Director Joanne Sammut said the actors started practicing in February. She believed that what made Franciscan’s Living Stations so special was all the work of the students. She said, “It was led by students, performed by students, done by students, and they really take the roles seriously.” All their work paid off.

Later on at 3 p.m., hundreds of students and families gathered for the Good Friday Celebration of the Passion. The service began with the Franciscan friars falling prostrate at the altar in silent adoration.

The difference between this Good Friday service and others one might typically attend was the singing. Under the direction of John Paul Dominic Brodeur, the Franciscan choir led the congregation in singing multiple different parts of the Mass, including several psalms in Latin and even the Gospel. Additionally, all the friars and religious sisters received a chance to kiss the cross, as the rest of the congregation venerated it.

Though the doors did not open until an hour before Mass, students were lining up in front of the Finnegan Fieldhouse as early as 6:30 p.m. simply to get a spot for the 8:45 p.m. Easter Vigil Mass.

The vigil began outside in front of a fire that was used to light the Paschal Candle. The light from this candle was in turn passed inside a dark Finnegan Fieldhouse, where each person passed on light from his or her candle until the entire gym was shining with candlelight.                        Students and families in attendance had the privilege of seeing one baby baptized and four catechumens enter into the church. Their entrance was celebrated with the Litany of the Saints and massive applause.

Senior philosophy major Cole Gaito described the uniqueness of the Franciscan liturgy. He said, “It is quite the experience — to participate in a liturgy where all those in attendance are excited and ready to take up roles in the Mass.” He continued by saying that “it revived [his] life to see the liturgy in a fashion that was originally intended by Christ.”

Of all the moments in the Mass, one moment was particularly anticipated by the students — the alleluia. Excitement about finally being able to sing “alleluia” was visible on everyone’s faces. When the time came, the Fieldhouse seemed to erupt with singing praises and the joy of Easter.

The joy carried on through the vigil, which ended promptly at midnight, and into one of the most uniquely Franciscan celebrations, the Resurrection Party.

The students celebrated Christ’s resurrection accordingly with the Resurrection Party, a full-blown celebration in the J.C. Williams Center, following the Easter Vigil.

It was difficult to even get through the doors for the party. The J.C. Williams Center was packed with not only students but families as well, including one little boy who danced all night long on the stage with the band. The band began with modern music then transitioned into praise and worship. Unlimited pizza and candy completed the festive atmosphere.

Students were able to worship well into the night with their closest friends and family. Some even stayed until the sun came up the next morning to celebrate Easter Sunday.