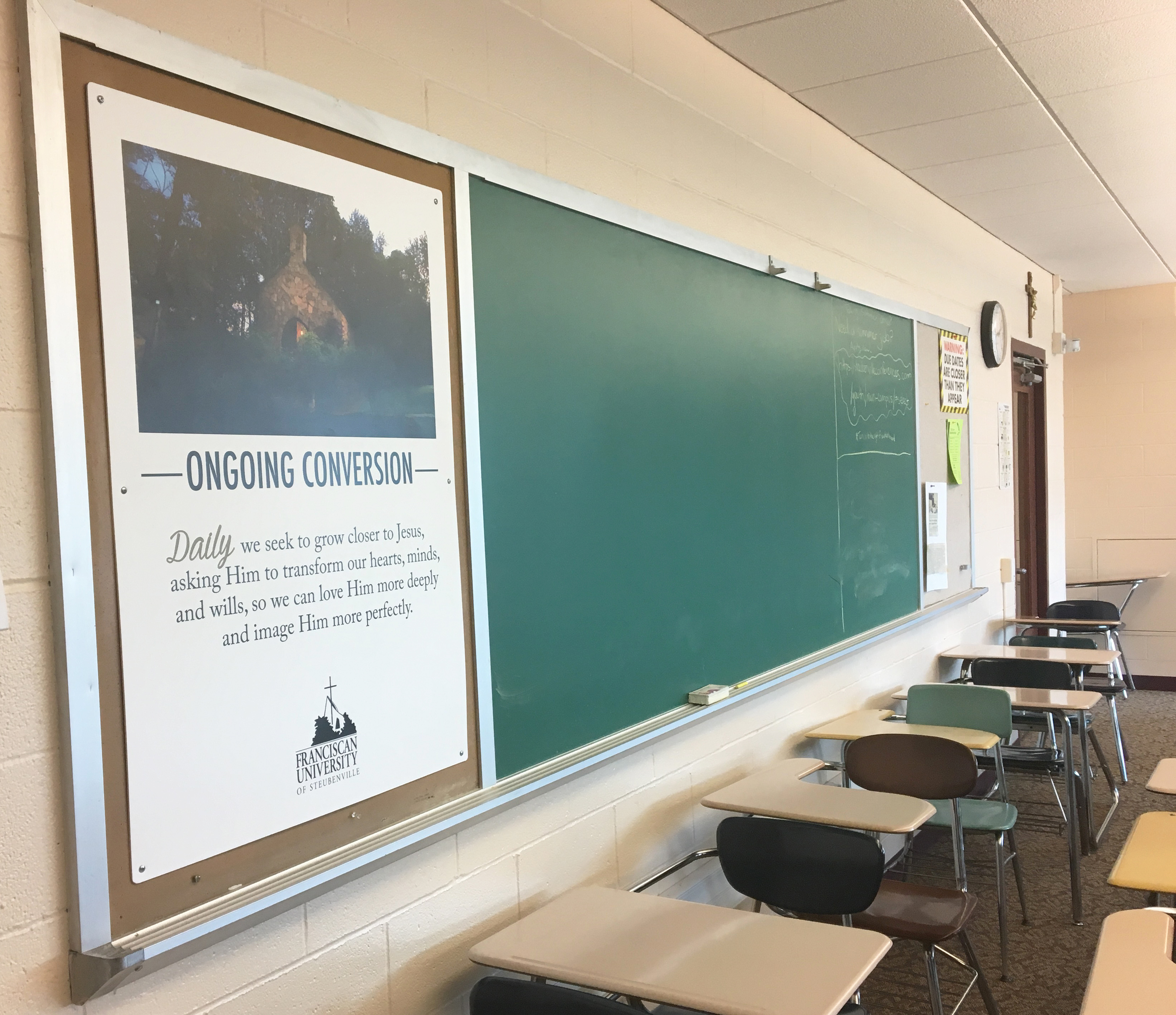 Since Feb. 24, posters have begun to appear in classroom around campus with captured pictures and descriptive phrases that uncannily seem to represent Franciscan University. The question on many students’ minds is what are these, and where did they come from?

“We all have different roles at the university. It’s important that something unites us, and that something can be manifested in those charisms,” said James Mello, who holds a doctorate in educational leadership.

According to Mello, who helped facilitate the strategic planning process for their creation, the charisms are a way of putting a name on concepts already embodied by the university. “We’re trying to be more intentional and to call our aspirations, our hopes, by name,” said Mello.

The process of creating these charisms dates back to soon after the inauguration of the Rev. Sean Sheridan, TOR, as university president. According to Mello, the strategic planning process led to many surveys of students, faculty, staff, parents, and alumni, and the committee for the creation of the charisms “started to see some common threads in terms of what people were saying about the university and their aspirations for the university.”

He and others began looking at what other institutions were doing and found that many other places had institutional values. “There’s a flatness in that word (values),” said Mello. “For us, we wanted something that captured that spirit of energy and action meshed with this deeply held belief, and the word that we kept coming back to was charisms … that added spirit, that combination of both the rational but also the fervency of faith.”

Thus the process began. The committee listened to what people had to say about the university and started to narrow that down to a compact list. “If they say that about us, let’s really call these what they are, then use them as our motivation, our guide,” said Mello, “not because we’re trying to live up to someone else’s expectation but because we’re motivated very internally from our institutional mission and vision to be that which we are called to be. These are ways to give that a name.”

Ultimately, the committee boiled down all the feedback to a list of seven characteristics. “You look at those seven and think ‘that’s about right.’ We didn’t start off saying we’ve got to have seven, let’s work to seven. It really had a natural process,” said Mello. “I think the number and everything, it reflects that openness without some preconceived idea …. We knew we wanted to get there, we just didn’t know what it was going to end up like …. We’re just instruments.”

In October of 2016, the committee presented their list of charisms to the Board of Trustees on a bookmark. “It’s a little wider than the average bookmark,” said Mello. “It’s a little indication that we’re trying to do more than just typical.”

After finalizing the details of the charisms list, the bookmarks grew to a campus-wide movement, including the posters in the classrooms and also a social media campaign to spread the word. There is a special emphasis on highlighting the friars’ presence on campus and the many locations where the university is present.

For example, the picture for family is the rugby team praying with their opponents and “extending that sense of family not just to those who call themselves Franciscan University but really reaching out and bringing others into the family even for the moment,” said Mello.

Franciscan’s charisms are things that can be lived out every day by anyone and used as a guide, expectation and measure for their efforts. “It’s important that we get that message out there,” said Mello. “It’s almost more important that we live it, and people experience that when they’re on campus, when they’re part of this family and then when they go forth off campus to the rest of their lives.”