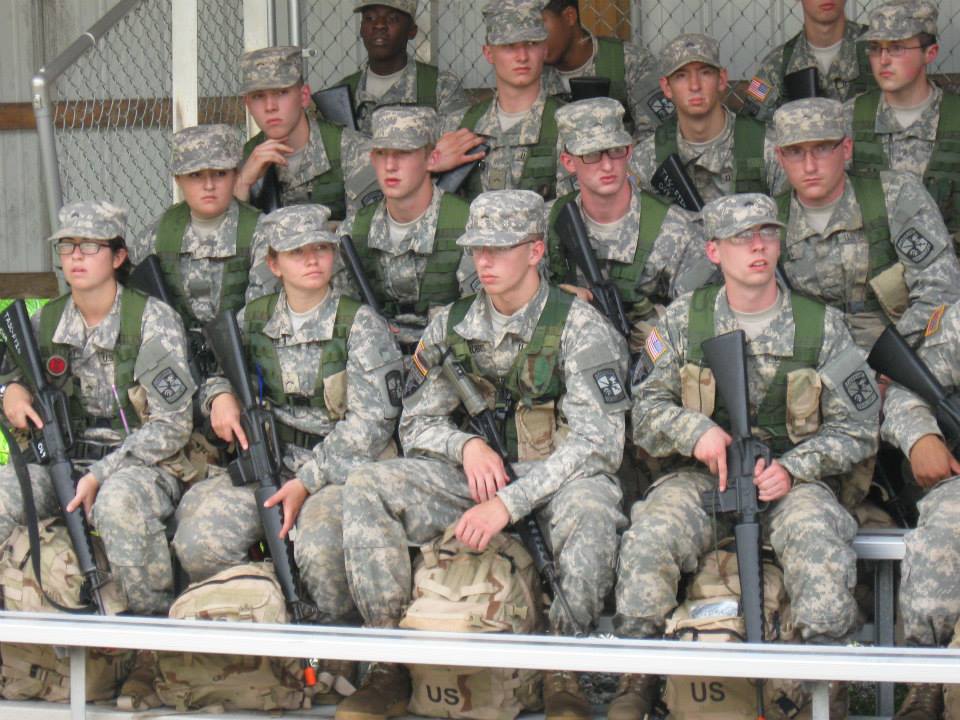 Franciscan University Army ROTC cadets participated in Cadet Summer Training at several locations throughout the country and around the world. The rising seniors (MS-IV cadets) were required to attend the Cadet Leadership Course at Fort Knox in Kentucky. Advanced Camp (CLC) involved a month of intensive leadership training and a rigorous two week-long field-training.

When taking part in the field training exercise, cadets apply the tactical proficiency that they developed throughout their ROTC careers by practicing ambushes, attacks and reconnaissance missions against other platoons.

“The course was far more of a mental than physical struggle during the long and hot training days of ground and tower week,” said Blackley. “When I finally got to jump week, however, it was definitely worth it. I realized all the training was to build muscle memory to help with exits and landings.”

Cadet James Hildebrand, a junior MS-III, traveled to Germany to participate in the Cultural Understanding and Learning Program, a foreign exchange program the Army has with partner nations around the world.

Hildebrand said, “Germany was an incredible experience that challenged and developed my world views and pushed me to grow as a leader and future officer.”

“I was exposed to how nursing is integrated into the military,” said Kelly. “We toured the Pentagon and participated in a mass-casualty exercise. We toured the White House and Capitol Building along with many other sites in D.C. We were also privileged with a chance to be Honor Flight Chicago guardians of World War II and Korean War veterans for their day in Washington D.C.  It was a phenomenal and unforgettable experience!”

I, Stephen Shaw, participated in Cadet Troop-Leading Training (CTLT), an internship program where cadets are attached to real units to shadow a lieutenant and learn about a specific branch of the Army. I was assigned to a mechanized-infantry platoon in the 11th Armored Cavalry Regiment (ACR) at the National Training Center (NTC), in Fort Irwin, California.

NTC is located in the Mohave Desert. There, I participated in a ten-day field-training exercise where the 11th ACR acted as the Opposing Force for several units preparing to deploy to Iraq and Afghanistan.  We were mounted in tanks for the entire rotation and participated in a movement-to-contact mission, a town defense, and two attack missions.

I had opportunities to learn the basics of armored maneuver tactics throughout the rotation and to experience life with the soldiers in the platoon. I learned the fundamentals of platoon leadership through observing the lieutenant and had a very formative and educational experience.

Now our cadets are back in school again.  Some have just one more year in the ROTC program before commissioning and unit assignments. Others are juniors and will practice leadership by motivating and counseling the freshman and sophomore cadets. Whether seniors or juniors, all the cadets who participated in summer training have learned a great deal about effective leadership and all the relevant skills they will need to succeed as leaders in the United States Army.