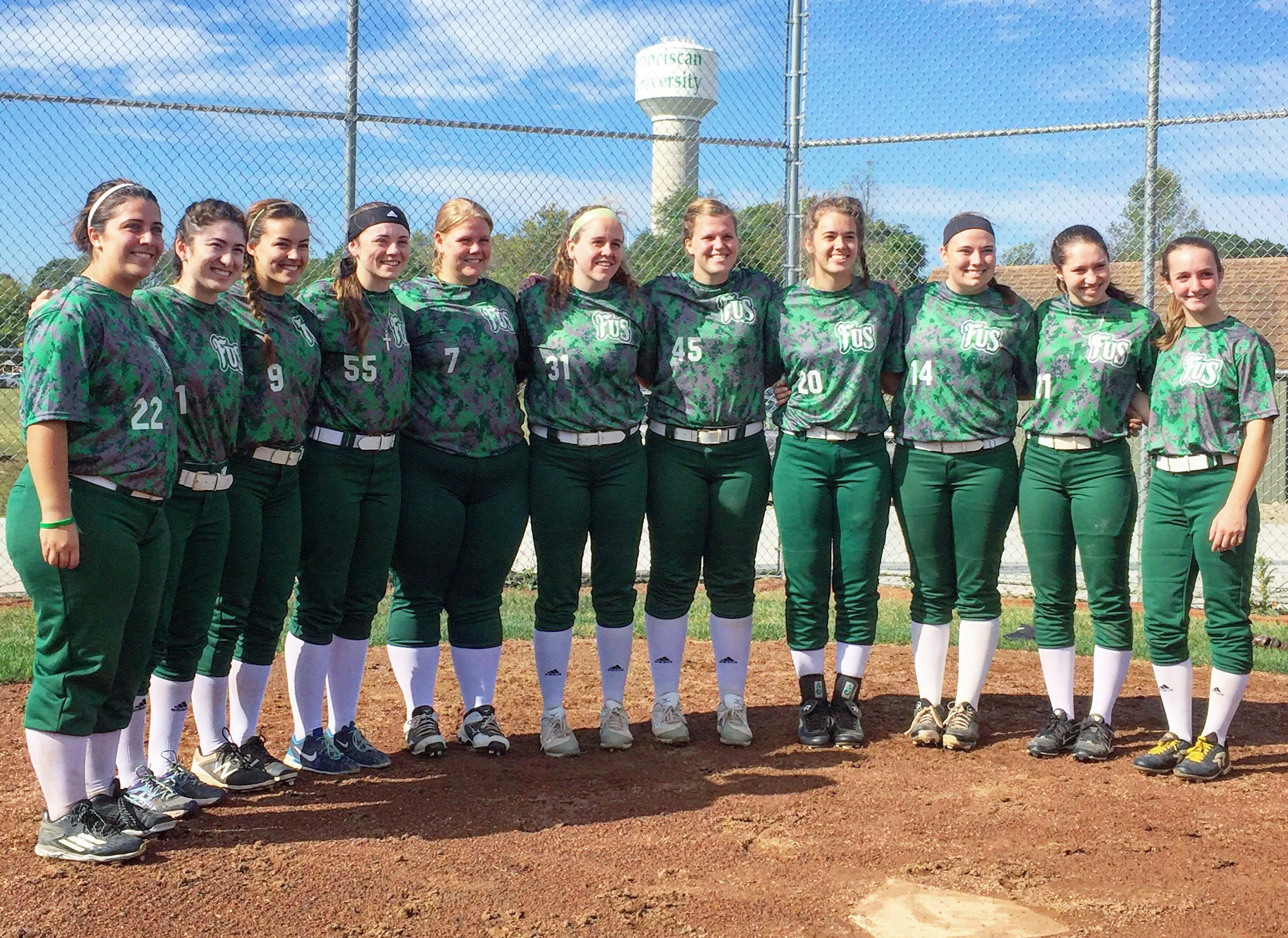 After a record breaking season that ended on a frustrating note in 2017, Franciscan University’s softball team is raring to go, ready to prove to the AMCC that last year’s success was not a fluke.

The Lady Barons went 12-20 overall last year with a conference record of 8-10, despite never having won more than three games during any other season in program history. They also made the AMCC tournament for the first time in program history, but were unable to play any games due to weather.

Sophomore first baseman Ashley Kondracki said that not being able to play in the tournament was a great frustration for the entire team after playing so well during the regular season.

“I know we would have done very well, but then we didn’t even get the chance to prove it,” said Kondracki.

Head coach Jim Walker said that this frustration has been motivation for players as they prepare to compete again in the spring.

“The returning players want to get back to the playoffs and prove to the rest of the conference that we weren’t just going to be successful for one year,” he said.

The Lady Barons will continue the youth movement that led them to success last year, when six of the nine starters were freshmen. Walker said that four more freshman have joined the team and combined with the continued improvement of the returning, mostly sophomore, players, the Lady Barons have “gotten better at every position” since last year.

Walker’s biggest worry coming into the offseason was replacing his ace pitcher, Jordan Cunningham, who graduated last year after becoming the winningest pitcher in program history. Cunningham won five games last season with a 2.92 ER,  and her departure left a glaring hole in the pitching rotation that Walker was tasked with replacing.

Walker found just what he was looking for in freshman pitcher Andi Queen, whom he expects to compete for the top two spots in the rotation right away. Queen will join sophomore Jayln Effertz and junior Amanda Pulice as the team’s pitchers.

“They are three very different types of pitchers, so we plan on really keeping teams off balance from a pitching aspect, which will bring our earned-run average down,” said Walker.

Walker also expects freshmen Allyson Weiss and Ally Kuntz to have immediate impacts on the team’s offense. As a team last year, the Lady Barons batted a decent .271, but with Weiss’ speed at the top of the order and Kuntz’s power supplementing the bats of sophomores Kayla Anderson and Kondracki, both of whom received all-conference honors last year, the team’s record can only improve.

Kondracki, one of three co-captains this year along with senior Lindsey Finch and junior Anna Ames, says that the team has grown in communication and leadership since last year.

“Everyone has a unique role and I think that is helping us flourish as a program,” said Kondracki.

The Lady Barons had a conference record of 7-5 at home last year, but really struggled with playing away, putting up a paltry 2-10 record during those games, which Walker attributes to the relative youth on the team.

“It was tough for the freshmen last year because we expected them to play right away and be significant contributors,” said Walker. “The rigors of college athletics and college academics kind of build up on you. … Now that they’re a little more experienced, it shouldn’t be that much of an issue this year.”

Walker coaches a very aggressive style of play, which was surprising to freshman left fielder Victoria Clute, who said that it was “a bit of a shock” coming from high school. However, Clute believes that this is the approach the Lady Barons need.

“We’re very competitive as a team, so being aggressive is going to be what we need to do in order to win games,” she said.

Walker has already seen results of the team’s growth. Earlier this semester, the Lady Barons played in three games, winning two. Walker said that Queen didn’t allow more than one run and that the offense exploded, scoring nine runs in one game and 12 in another, which he credited to the team’s speed and ability to take extra bases.

Kondracki said that the Lady Barons are ready to take on this next season.

“We’ve grown in every single position, and I think we’re stronger at this point in the preseason than we were at the end of the season last year,” she said.

Both Kondracki and Walker expect to return to the playoffs this year and believe that they will do even better during the regular season, even going as far as to say that challenging the powerhouse Penn State Behrend isn’t out of the question.

“We expect to be in the playoffs,” said Walked, “and really, that should be our expectation every year from here on out. With the talent we have, there should be no reason that we can’t finish in a playoff spot.”

The Lady Barons will open their season at home on March 7 against the Oberlin College Yeowomen.