Franciscan volleyball falls short on Senior Day, in a 4-way tie for second place in conference 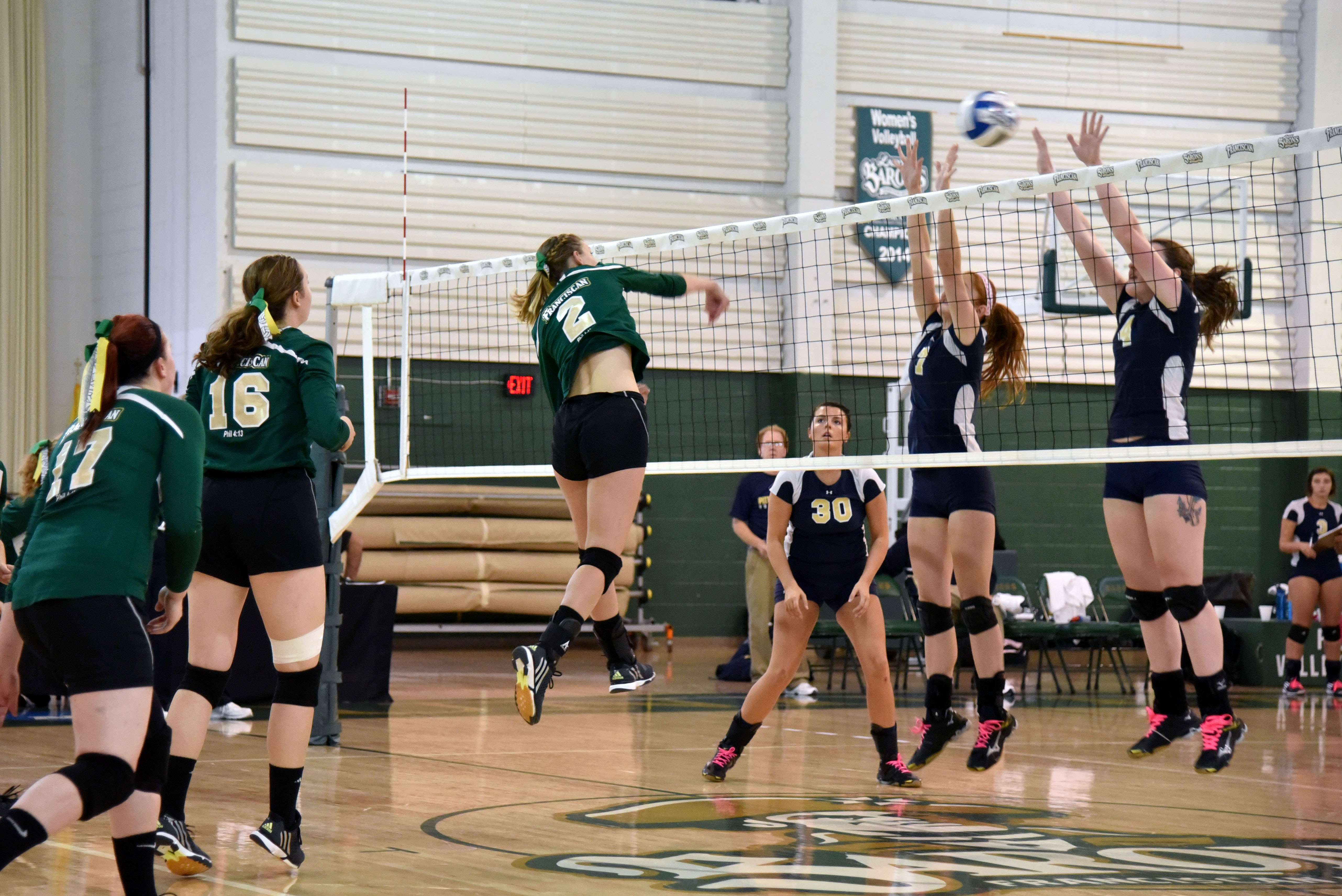 “It was disappointing for our seniors,” said Head Coach Kelly Herrmann. “They want to win every match but certainly their Senior Day match. Honestly, I take responsibility for it. I let my team be distracted by the activities of the day, and I didn’t keep them focused enough before the match. I think that affected us. Bradford played really well.”

Right from the beginning, Franciscan knew it was in for a long match as the Panthers got out to a strong start in each set, exposing some weaknesses in the Lady Barons’ defense.

Down 19-12 in the first set, Herrmann called a timeout, which began a 6-point run on the serve of sophomore right-side hitter Bella Wedig. As the two teams traded points, senior libero Samantha Kelly was able to put away the first set by leading the team on another 6-point run to win it.

“We were kind of out of sync,” Herrmann said. “I thought we would get out of it after that first game since we came back so well but yet we went and did that in all three games.”

Senior outside hitter and defensive specialist Christina Lawrence was key in the first set win with four of her kills coming in the last eight points. Lawrence led the team with 10 kills and added 12 digs defensively on her Senior Day.

“She is our most consistent hitter right now,” Herrmann said. “We need to get the ball to her. We got her in a rhythm early and then we weren’t setting her enough so she kind of got out of that rhythm.”

The second set was similar as Franciscan was down 20-12 but was able to win eight of the next 10 points to cut the Panther lead to two. However, Bradford was able to rally to take the second set and even things up. The third set also remained close but the fourth set belonged to the Panthers.

“Dani was a little hard on herself at the end but that’s part of being a senior on Senior Day,” Herrmann said. “Dani brings a lot of offense, which is where we struggle.”

Unlike the University of Pitt.-Greensburg match, however, the middle hitter position provided a lot more power overall as junior middle hitter Emily Baznik had one of her best performances of the season with seven kills.

“Emily played extremely well,” Herrmann said. “She is really getting back into feeling comfortable playing middle.”

“The only ones she’ll think about are the ones she missed,” Herrmann said. “That’s Sam, but you can’t do it on your own.”

Ironically, the Lady Barons find themselves in the exact same position as last year, when Pitt.-Bradford handed them their second conference loss. Franciscan still finished the season second in the conference and on its way to the program’s first conference championship.

“One thing that is very true of our conference is that there really aren’t easy matches,” Herrmann said. “In every single match, you have to work hard. That’s good for the AMCC, that’s good for each one of our teams who are challenged each time they step out. I think that our girls will pull it together and certainly our seniors will work hard to make sure that happens.”

Looking at the conference standings, the Lady Barons now drop to 5-2 into a four-way tie for second place with Medaille College, Penn-St. Behrend and La Roche College. Franciscan has matched up with two of those three teams, beating La Roche in four sets but losing to Medaille in five. The Lady Barons will meet up with Penn-St. Behrend, however, to end the regular season Oct. 31.

The Lady Barons will hit the road for one more nonconference match, taking on Chatham University for the second time on Monday, Oct. 26 at 7 p.m.