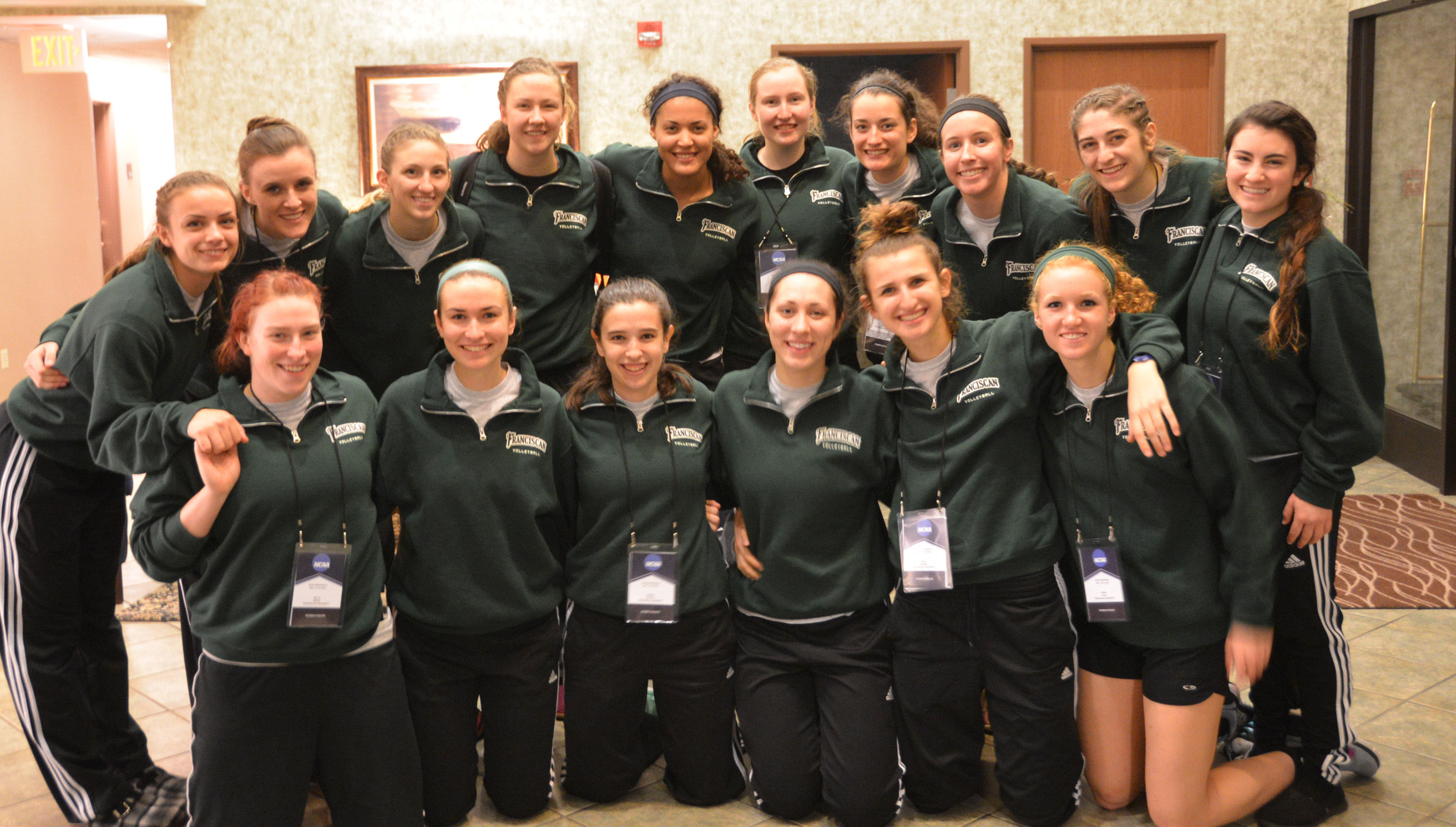 Appearing in its second consecutive NCAA tournament, the Franciscan University volleyball team lost to Juniata College in Huntingdon, Pennsylvania, for the second-straight year in three sets, 14-25, 10-25 and 11-25.

Franciscan advanced to the tournament after beating Medaille College for the Lady Barons’ second championship, receiving the conference’s automatic bid to compete at the national level.

“We’ve been playing some great volleyball lately and then you step into a situation like this where it’s the NCAA tournament, it’s a big deal,” Head Coach Kelly Herrmann said. “We were so excited to be here and, feeling like it was our second year, we thought that maybe we would be rid of some of the nerves. That wasn’t quite the way we played today but this experience will help us for the next time we come back here, and hopefully that will be next year.”

Juniata College received the no. 1 seed and hosting privileges for the regional after finishing the season with a 31-2 record, ranked no. 3 in the nation, so the Lady Barons knew it was going to be an extremely tough match from the start.

For the team’s three seniors, the NCAA tournament also marked their last appearance in a Lady Barons uniform. Senior outside hitters Dani Link and Christina Lawrence contributed six total kills in their last game while libero Samantha Kelly finished her career with 13 digs against the Eagles.

Herrmann gave credit to all three of her seniors for their contributions in helping to grow the Franciscan volleyball program and particularly in winning the program’s first two conference championships.

“I cannot say enough about our three seniors,” said Herrmann. “They just have accomplished so much at Franciscan. While that creates a hole when they leave and those are tough shoes to fill, they have done a very, very good job of showing the younger players on the team the way. That is the mark of a real leader is that they leave behind them capable leaders, so I think that we’ll be in a good place when they leave.”

Lawrence added, “I think that’s the saddest part for me today is to take off the jersey after four years, but it’s beautiful to think back on the four years and the gift that it was.”

Leading the team was freshman outside hitter Maria Ciola with five kills in her first appearance at the national level. The freshman was understandably nervous to start the match but settled down in the final two sets as she played more aggressively.

“I told Maria to go out there and go for it, and in the second and third games, she really showed the hitter and the player that she is,” Herrmann said. “She took on that attitude of fearlessness which is what we needed.”

Fellow freshman Callahan Hickey played confidently, even though Juniata was particularly attacking her in serve receive, trying to expose a Lady Baron weakness. Hickey showed no weaknesses as she finished with five digs and two assists.

“Callahan playing back row, she has been a tremendous player for us as a freshman,” said Herrmann.

While graduation will hit the Lady Barons hard as the team loses program leaders in digs, kills and service aces, Franciscan is taking this experience of playing at the national level and hoping to return next year more prepared than ever.

Leadership will turn to juniors Mary Moore, Rachel Potopa, Ellie Waldsmith and Emily Baznik to lead the team to a “three-peat” in the Allegheny Mountain Collegiate Conference tournament as seniors.

“The experience for our team, being here this year and last year, the conference tournaments, that experience is so valuable,” Herrmann said.

Moore added, “I’ve played three years under the leadership of Dani, Sam and Christina, and they have set a goal that I only hope to achieve some day.”