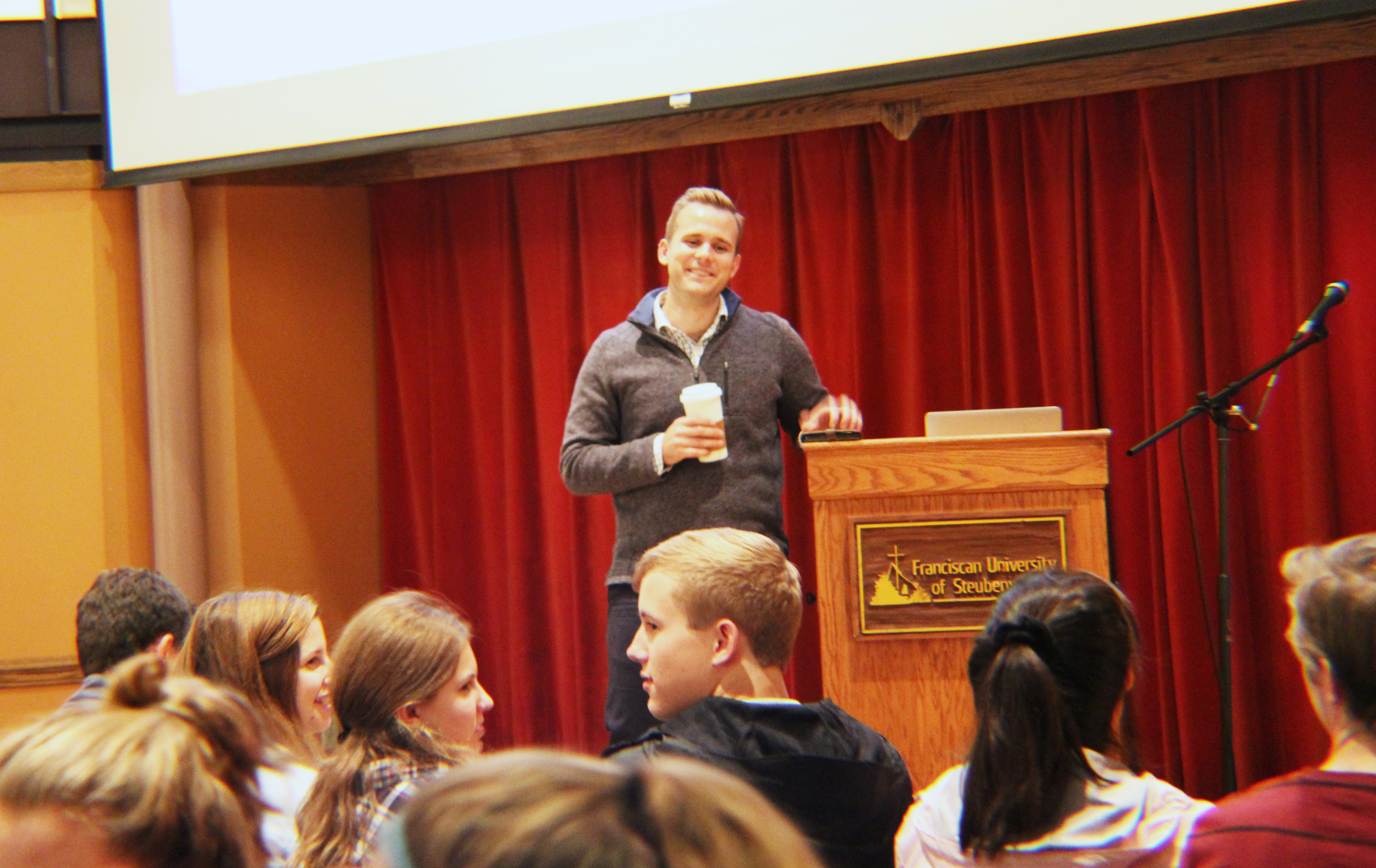 Many students crowded into the Gentile Gallery on Oct.24, captivated by the topic,“Life After Franciscan.” Franciscan alumnus Tim Glemkowski shared his post-college experience in his presentation that lasted just under an hour.

Glemkowski began by consecrating the night, the talk, all the listeners and their futures “fraught with anxiety and unclarity” to the Immaculate Heart of Mary. Then he began his talk in a relaxed manner, telling about his own life currently and addressing the power of Franciscan University’s mission.

“This place is an incredible hotbed of evangelization. It’s a culture of devout Catholicism,” he said, later adding that studying at this university is a “gift that’s also a calling.”

Glemkowski explained that no matter where people go to college, they will always feel culture shock when entering the adult world because they have spent their whole lives living out the vocation of students, and suddenly their whole world changes. As lay people, Glemkowski said, graduates are called to live their lives employing the three pillars of holiness, community and mission, using the university as a reference point.

Holiness is following God’s call to live radical Christian lives, Glemkowski explained, with a pursuit of holiness that should make the person uncomfortable without isolating those around him. Community is essential, but it takes work because it means the person has to give, and mission means making disciples.

Glemkowski intentionally told stories of his own life post-graduation rather than giving a plethora of aphorisms to live by, and he also noted that his talk was mainly addressed to people called to live a lay vocation in the Church.

“For a long, long time, I didn’t believe that you could be radically holy and be a lay person,” said Glemkowski, who spent a year in seminary after a short time in the secular world.

Glemkowski concluded his presentation with encouragement for the difficult road ahead. He said that as much as he loved his time at Franciscan, he would not trade the life he has now for any amount of money. “The joy grows as the struggle grows,” he said.

“The main thing I really appreciated about the talk was the three pillars: community, mission and holiness,” said sophomore Katie Hugo, “and how you need all three. I also really appreciated that he said you can be radically holy and live the married life.”