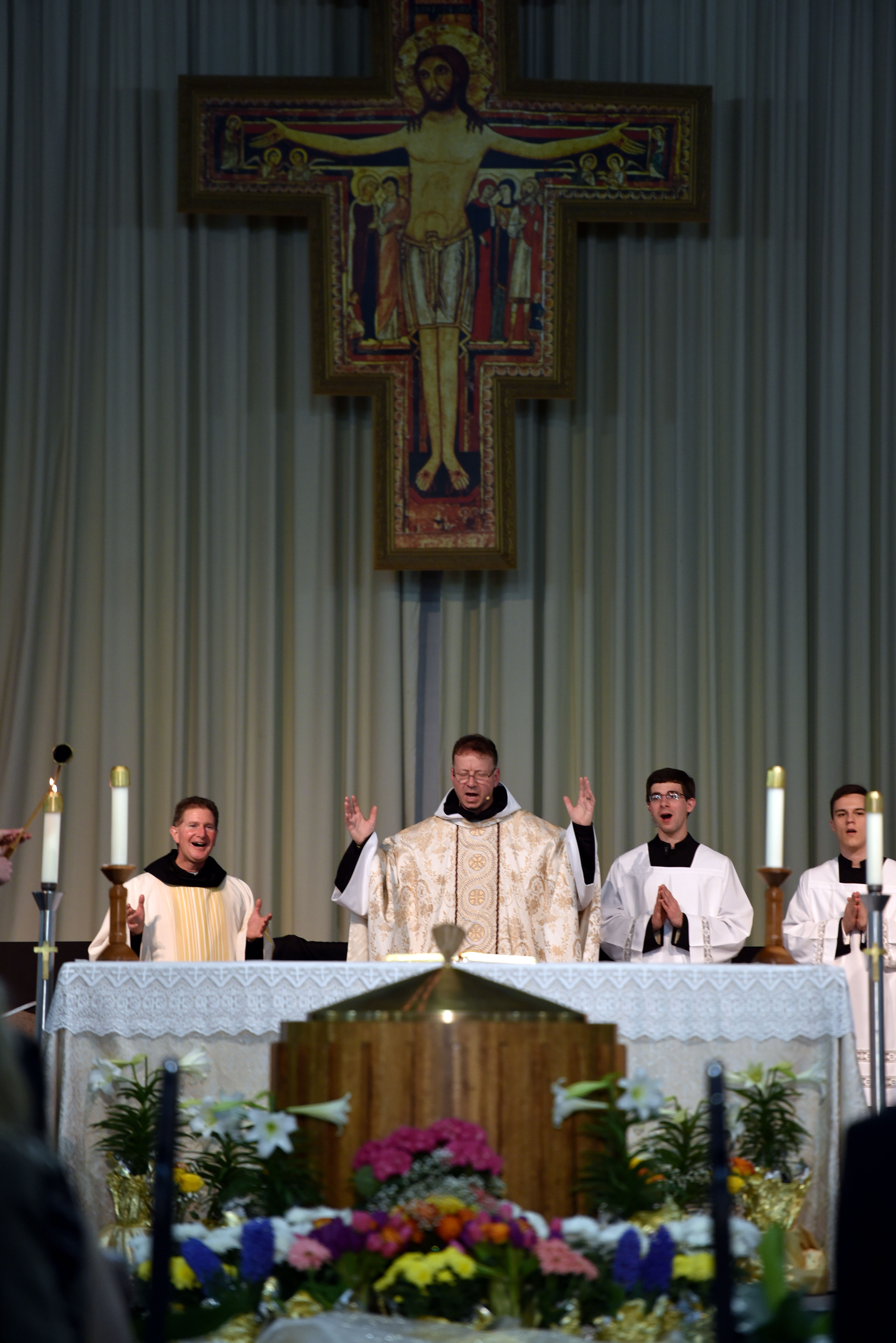 Anticipated with great zeal by all its students, Franciscan University of Steubenville experienced strongly the outpouring of the Holy Spirit during Holy Week on campus.

Coming together to sing the Matins and Lauds of Tenebrae preparing for the Holy Triduum, the masterful Schola Cantorum Franciscana of Franciscan University, consisting of about 30 students, led Psalms and sung prayers, while candles were lit during the service. The congregation switched back and forth to sing along with each side of the schola.

David Forester, a sophomore member of the schola, said, “Singing for tonight was prayerful and helped me get into the mindset.”

Senior Anna Acciani said, “Chanting in community and entering into prayer for 90 minutes without ceasing, transported me by the music, and (I) reach(ed) a level of prayer that I hadn’t experienced before.”

The Rev. Sean Sheridan, TOR, celebrated the Holy Thursday Mass in the Finnegan Fieldhouse with students and their families. Twelve men (of which comprised students and faculty of Franciscan) had their feet washed by Sheridan.

His homily focused on the Eucharist as the heart of the church and the interconnectedness of Holy Thursday with Calvary. In addition he spoke on the duty of priests to model Christ by becoming humble servants.

Junior Faith Mosher said, “It was beautiful to hear how Father Sean said that (the Triduum) is one giant liturgy, and that Mass didn’t end but accompanied Christ to the chapel.”

The liturgy concluded with a candlelit procession to Christ the King Chapel where the Blessed Sacrament could be adored. Maundy Thursday Lauds concluded the evening at the chapel’s close.

Along with solemn musical accompaniment made up of students and religious sisters, having visuals such as “blood” and the carrying of a real wood cross made the experience more realistic and powerful.

The Rev. Nathan Malavolti, TOR, led the Good Friday service at 3 p.m. Many students marveled at the way this most joyful of friars was able to honor the utmost sorrow of the day, such as in the moving reflection in his homily.

Malavolti said, “Calvary: when the world’s worst evil and the greatest love collides. The energy brought about is like when in science matter and anti-matter collide. But love always triumphs.”

The schola led the students in the solemn intercessions as well as the Gospel reading, which was sung in its entirety.

The Finnegan Fieldhouse doors opened over an hour before Mass and the place filled up within minutes. The Rev. Shawn Roberson, TOR, who celebrated the Mass, blessed the Easter Fire outside of the building, and the entire congregation received candles lit from the flames.

The reverence for the extended liturgy and the Gospel was stunning, and the excitement at the singing of “Alleluia!” for the first time since before Lent was extremely heartfelt.

The campus was alive with the joy of the Resurrection. As it reached midnight at the conclusion of the Mass, students all rushed in unison to hug one another and wish each other a Happy Easter.

Freshman Olivia Allen said, “There is an extensive joyful expectation on the eve of Easter as we’ve gone from tears to healing to the joy of Resurrection.”

After the Easter Vigil, the J.C. Williams Center housed the annual, much anticipated Resurrection Party, which provided free pizza and snacks to students as well as live music, Easter egg coloring and lively conversation. The party lasted until 4 a.m.

For students ambitious enough to set their alarms after the fun of the Resurrection Party, a more quietly reflective 11a.m. Mass on Easter morning was celebrated by the Rev. John Shanahan, TOR. More traditional hymns of the Easter season were sung at this liturgy.

In his eloquent Easter Vigil homily, Pope Francis provides a brilliant take away on the Easter season.

Francis said, “He is our greatest joy, He is always at our side, and He will never let us go. This is the foundation of our hope which is not mere optimism: Christian hope is a gift that God gives us if we come out of ourselves and come to Him. The Resurrection conquers death, conquers fear. Today is the celebration of our hope. Nothing and no one will be able to separate us from His Love.”