Household Life Mass and awards, focus on theme of outreach and evangelization 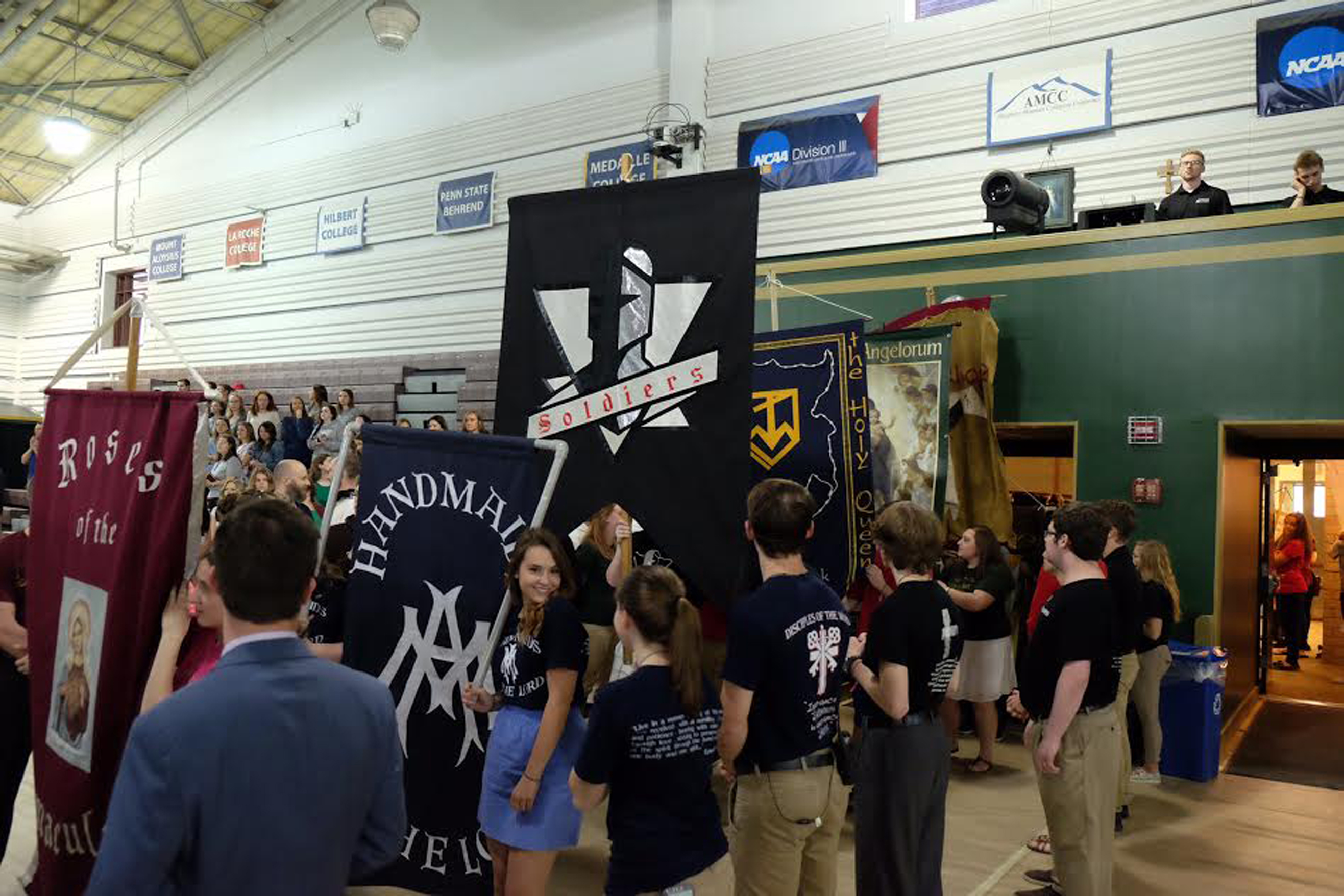 Outreach and evangelization was the theme of the household awards and final Household Life Mass of the semester on April 21. The pastoral associate to households, the Rev. Rick Martignetti, OFM, presided over the Mass while the Rev. Gregory Plow, TOR, director of the Priestly Discernment Program, read the gospel.

Martignetti began his homily on John 21:1-14 with a comical note, imagining what it would have been like if the 12 disciples were to form a household on campus. They would immediately break the rules, he said, because on Pentecost they called 5000 men when the household cap is 40 members. He joked that St. Peter would have “first pope” written on his T-shirt and the disciples would reject St. John’s proposal to name the household “The Beloved Disciples” because it seemed “too girly.”

Taking a serious turn, Martignetti reflected on Jesus’ call in the gospel reading to the disciples to “cast your nets on the right side.” He told the households to follow Mary’s call to “do whatever he tells you” and follow Jesus’ instructions.

“Households calls us to holiness,” said Martignetti. He described how households help prepare members for their next vocation as single, married, or religious.

“All the time spent in household is practice for your next household. (Households) teach you about perseverance, commitment and taking the lower place,” Martignetti said. “The net that you cast in household is a net made of community, prayer, love, self-sacrifice.”

Household pastoral associate Sister Jean Marie Ledsome, TOR, distributed the household coordinator of the year awards. Co-coordinators of Disciples of the Word men’s household Marcus Hummel and Tommy Lannen won for the men’s category. Ledsome said that the men were examples of “servant leadership” to the men in their household as well as to others on campus.

Martignetti announced the St. Clare and St. Francis awards. The St. Clare award was given to Madonna of the Streets women’s household. Martignetti noted the household’s ministry for life, especially on the streets and outside of a Pittsburgh abortion clinic. He also acknowledged the household’s dependency on prayer and trust in the Lord, especially after the sudden death of a past member at the beginning of the spring semester.

The St. Francis Award was given to Koinonia men’s household. Martignetti noted the men’s commitment to Mass and liturgy of the hours as well as their tight brotherhood as they discern the call to priesthood.

Director of Household Life Bob Lesnefsky announced the Steel Cross award, which was given to both Crown of Creation women’s household and Fishers of Men men’s household. Lesnefsky acknowledged the women’s efforts to educate and invite the Franciscan community to study Pope John Paul II’s teachings on the theology of the body.

He also recognized how the Fishers of Men’s embraced their covenant’s call to evangelize the community and the world. He commended them for hosting weekly learning nights where they invited students to attend a talk and discussion every week in their common room in Louis Hall.

Before the awards ceremony began, Lesnefsky thanked Martignetti and Ledsome for their work and said that they are “such a gift to all of us, and especially to me.” He also thanked his student assistant, Madigan Maere, whom he listed as one of the top five most important women in his life alongside his wife, his daughters and Beyonce.

Lesnefsky also called the members of Household Council and council president Ashley Bennet to the stage, thanking them for all of their work throughout the year, especially on the Resurrection Party and Household Olympics.