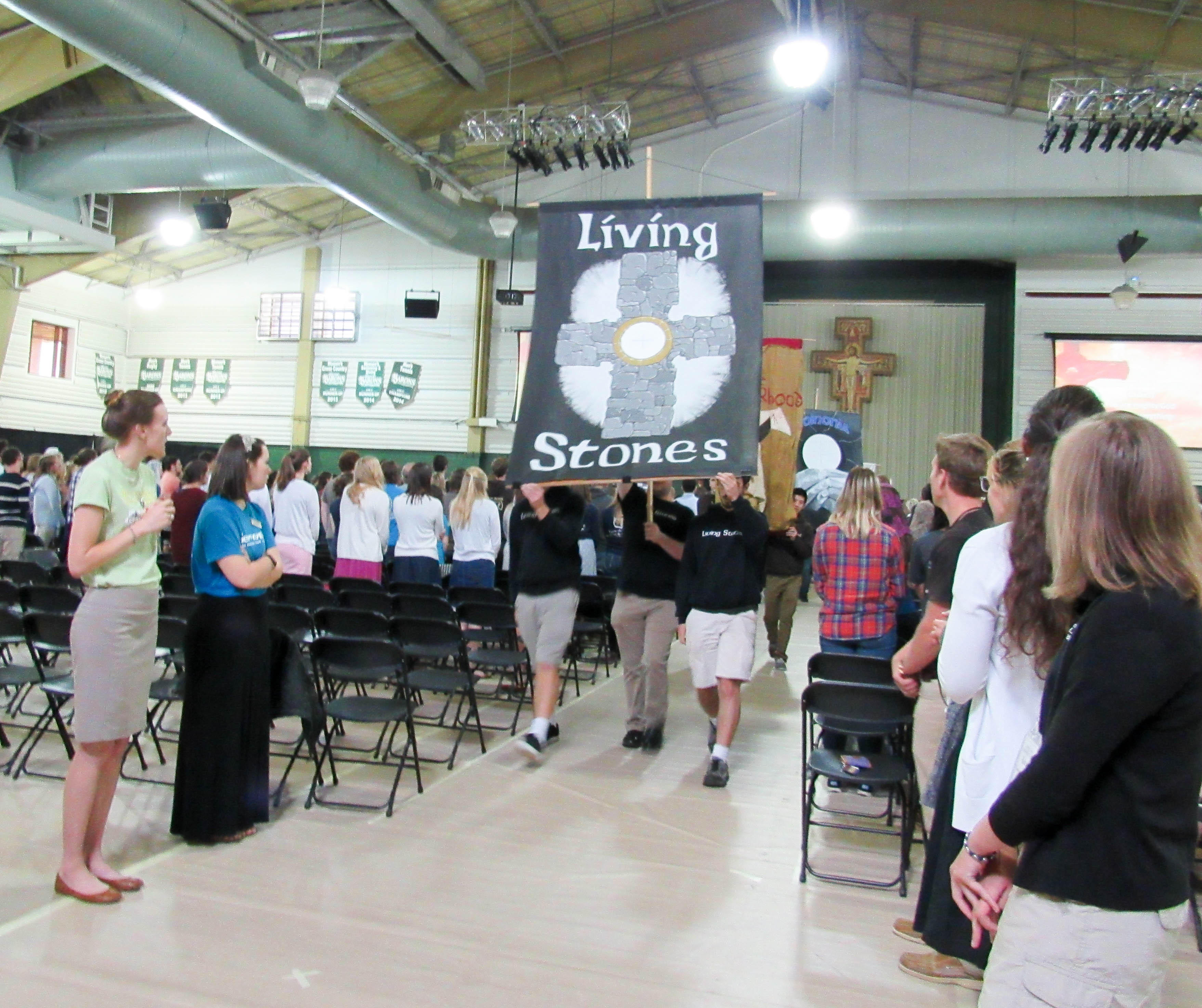 Household life dominated this past weekend, kicking off the semester’s household commitments with reverence, fun and games.

The Household Life Mass was held in the Finnegan Fieldhouse on Friday with Father Rick Martignetti, OFM, pastoral associate to households, as the main celebrant. All of the campus’s households processed down the main isle with their banners held high and proud to the tune of Rich Gillard’s song, “Lift High the Banners of Love.”

In Martignetti’s homily, he shared a story of his first time snorkeling with a friend in Guatemala. He shared his fear of the water and possible drowning due to the fact that the only words of instruction the native guide gave them before letting them off the boat to snorkel were, “Put this on (handing him a snorkel), jump in, look at fish.”

Father recalled how after he jumped in he struggled, he tensed up and began treading the water ferociously; meanwhile his friend and the other people in the group looked so majestic and peaceful, floating and swimming gracefully through the water.

“I thought I was going to die,” Martignetti said, “but I prayed to God to take away my fear.”

Immediately after he did, he said he felt better, relaxed and was able to swim and look at fish, caverns and the coral. He even recalled seeing a pufferfish, which he said was his favorite. Martignetti then encouraged the students to “Be not afraid and just jump in!”

This year it seemed like many students did just that. On the morning of September 9th at 10 a.m., the Household Olympics began. There was a feeling of intense rivalry in the air as each team arrived, many teams with painted faces, matching T-shirts and battle-cries.

The Olympics MC and head of household life, Bob Lesnefsky, was happy to announce that this year had the largest turnout in the event’s history. Bob also was kind enough to bring his family’s pig for one of the events, “Catch that pig!”

Senior Kateri Leonard said, “Everyone cheers everyone on, even if you’re not on the same team. I absolutely love it because it’s all in good fun!”

When asked about her previous experience with the Olympics, Leonard said, “I think doing the Olympics was a challenge for me at first.  I’m not very sporty or athletic to begin with, but once I came out of myself and realized that no one really cared if I was super good at any of the games, I jumped right in and just had fun!”

She continued, “That’s the point of the Olympics at FUS … to remind you that it’s okay to be silly, to dance like you have no homework and build camaraderie with your household that can last for a long time.”

Milana Tucker, senior, stated that she likes the Household Olympics because“it’s an opportunity to just hang out and have fun with people.”

Tucker even compared the Olympics to being like one giant dance party. Between the music, hot dogs, beautiful weather and fellowship students could often be seen breaking out into song and dance.

Tucker, a member of Crown of Creation, spoke of being in a household as “…a win-win situation, because all of the households. As long as you dive in they will lead you closer to Christ and to a more abundant version of yourself.”

Allison Morisey, freshman, said, “I was a little nervous because I don’t belong to a household. So, I didn’t know how included the freshman would be. I didn’t have any reason to worry though- we all had a lot of fun and played some pretty awesome games.”

“Last Bubble standing,” a game in which competitors climb into a huge inflatable clear plastic ball that greatly resembles a hamster ball and try to, hit, push, and knock their opponent out of the circle,was a popular choice among the games.

A variety of other friendly competitions were available such as: trash pong, tug-of-war, relays and a few inflatable games such as wipeout and hungry-hungry hippos.

Between the games and fellowship, many students agreed that it’s not hard to see why joining a household is something worth looking into.

Freshman Nick Brierly agreed, saying: “Franciscan is a very special place. You can find true camaraderie with your fellow classmates here, in addition to growing spiritually in your faith”.

Thus despite not coming out as victors, aside from Seraphic Valor and Regina Angelorum, this years’ champions, the competitors went home to shower with joy in their hearts and sunburn on their faces.