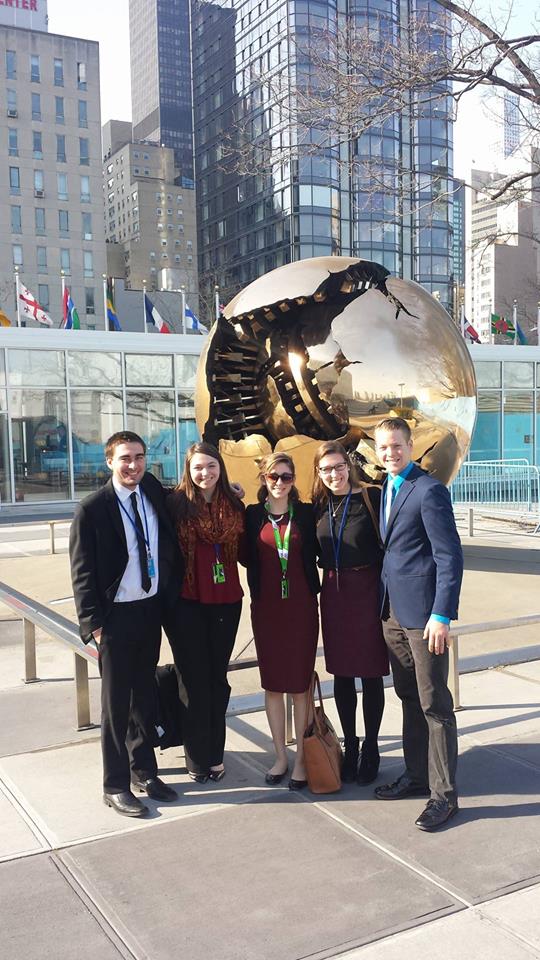 During spring break, seven members of Franciscan University’s chapter of the Intercollegiate Defense of Equality and Solidarity (IDEAS) spent their time working with the Statistical Commission on sustainable development goals.

The United Nations recently created a list of 17 global goals that it wants to achieve by 2030, such as eradicating poverty and ending gender inequality. Members of IDEAS had the chance to see how these goals might be measured quantitatively, said member Paige Heinen.

But the real purpose of going to the United Nations was far greater than just working with numbers.

“Our mission is to get young people to the United Nations to lobby for human dignity,” said Heinen.

She said, “The United Nations is a group of 193 countries that collaborate in an attempt to basically make the world a better place in numerous ways, but they sometimes go about it in ways that do not correspond with human dignity.”

In addition to fighting for truth and upholding the inherent dignity of the human person, IDEAS members went to the U.N. with the goal of showing powerful bureaucrats that young people do not necessarily like the things it is doing, said Heinen.

Andrew Koehler, president of IDEAS, said, “When we have a chance to speak, we challenge the panelists giving presentations with facts and authority. The panelists will likely try to dismiss our objections as quickly as possible, but it’s not about convincing the panelists anyways. It’s about planting seeds in the heads of all those in the room.”

Heinen said, “Laws do not change society. Laws do not change lives. … Our goal is to help the bureaucracy acknowledge that in order to have real change in the world, there has to be person-to-person connection and willingness to suffer for the other. Bringing the love of Christ to the other, that’s the most important thing.”

IDEAS was founded just two years ago by Franciscan student Andrew Koehler. A professor had been taking students on yearly trips to the U.N., and Koehler ambitiously decided to turn the venture into an actual club with a mission.

He said that one of his goals was to get young people from all schools to lobby in the U.N. In addition to Franciscan’s chapter of IDEAS, there are chapters in the process of forming at other schools, including Ave Maria University.

If you would like to “bring objective truth, reason, and above all the love of Christ to the United Nations” as posters for IDEAS encourage, reach out to the club at [email protected]