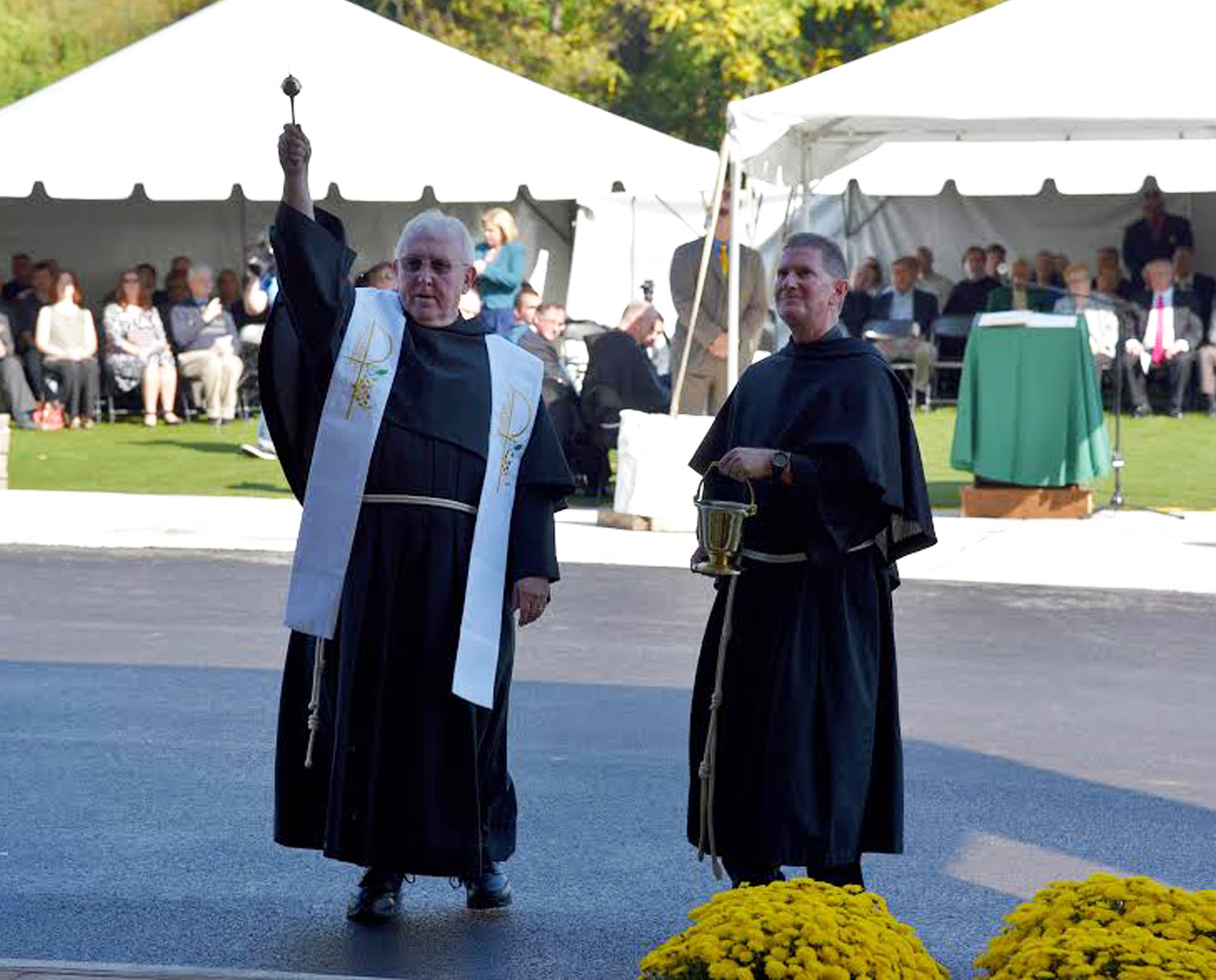 Celebrating the charism of hospitality, Franciscan University of Steubenville faculty and staff gathered with community leaders to celebrate the opening of the new hotel at Franciscan Square Thursday morning.

A large group of faculty and staff from Franciscan University of Steubenville, as well as local community leaders, gathered on the grass in front of the new Inn at Franciscan Square for the opening ceremony. This ceremony included a key ceremony, blessing, and speeches from the president of the university and local political leaders.

In his speech, the Rev. Sean Sheridan, T.O.R., president of Franciscan University, said the Inn at Franciscan Square embodies the Franciscan spirit of hospitality.

“As Franciscans, we strive to extend that spirit of warmth and welcome to all,” said Sheridan. “It is my hope and prayer that the Inn at Franciscan Square, as well as this green space and the future restaurants, will be known for the blessing of hospitality that they bring to our guests, and our local friends and neighbors alike.”

Domenick Mucci, mayor of Steubenville, described the opening of the hotel as a “very significant day,” for both the university and the city of Steubenville.

Mucci said, “This journey … (was) an important exercise for our community, an exercise of collaboration and cooperation between several entities.”

David Skiviat, vice president of finance and administration at Franciscan University, said the ho-tel showed a union between the college and the city of Steubenville.

Skiviat said, “It’s more than just opening a hotel, it really creates a new gateway into our community.”

“This is not a cookie cutter project at all,” said Skiviat. “It is unique to the community … and people will come back to it.”

Don Andrezjwski, vice president of sales and marketing for Prospera Hospitality, said that Franciscan University partnered with Best Western in the making of this hotel, as Best Western allowed Franciscan to incorporate its theme into the hotel itself.

The Inn at Franciscan Square, a four story structure, consists of 113 rooms, as well as an indoor pool, meeting rooms, VIP rooms, and an athletics room. Keeping with the style of Franciscan, each room includes a large canvas photograph of the Portiuncula chapel on campus.

Skiviat said the most challenging part of the creation of the hotel was the landscape. The construction workers had to deal with old water pipes, as well as phone lines and the building of a retaining wall.

Skiviat recognized all those who dedicated their time to the building in a particular way, with a special recognition to Franciscan’s own Physical Plant employees.

The blessing of the hotel was performed by the Rev. Richard Davis, T.O.R, chairman of the Board of Trustees at Franciscan University. After the blessing, Davis remarked, “You can never sell a blessed object, so we’ll have to keep (the hotel) forever.”

It was evident that both Franciscan and the city of Steubenville are satisfied with the work that has been done.

Construction will begin shortly for the building of two restaurants, located on either side of the hotel.

Damon’s Sports Bar and Grill will remain open until new restaurants are built.

The Inn at Franciscan Square is scheduled to take its first guests this Monday.