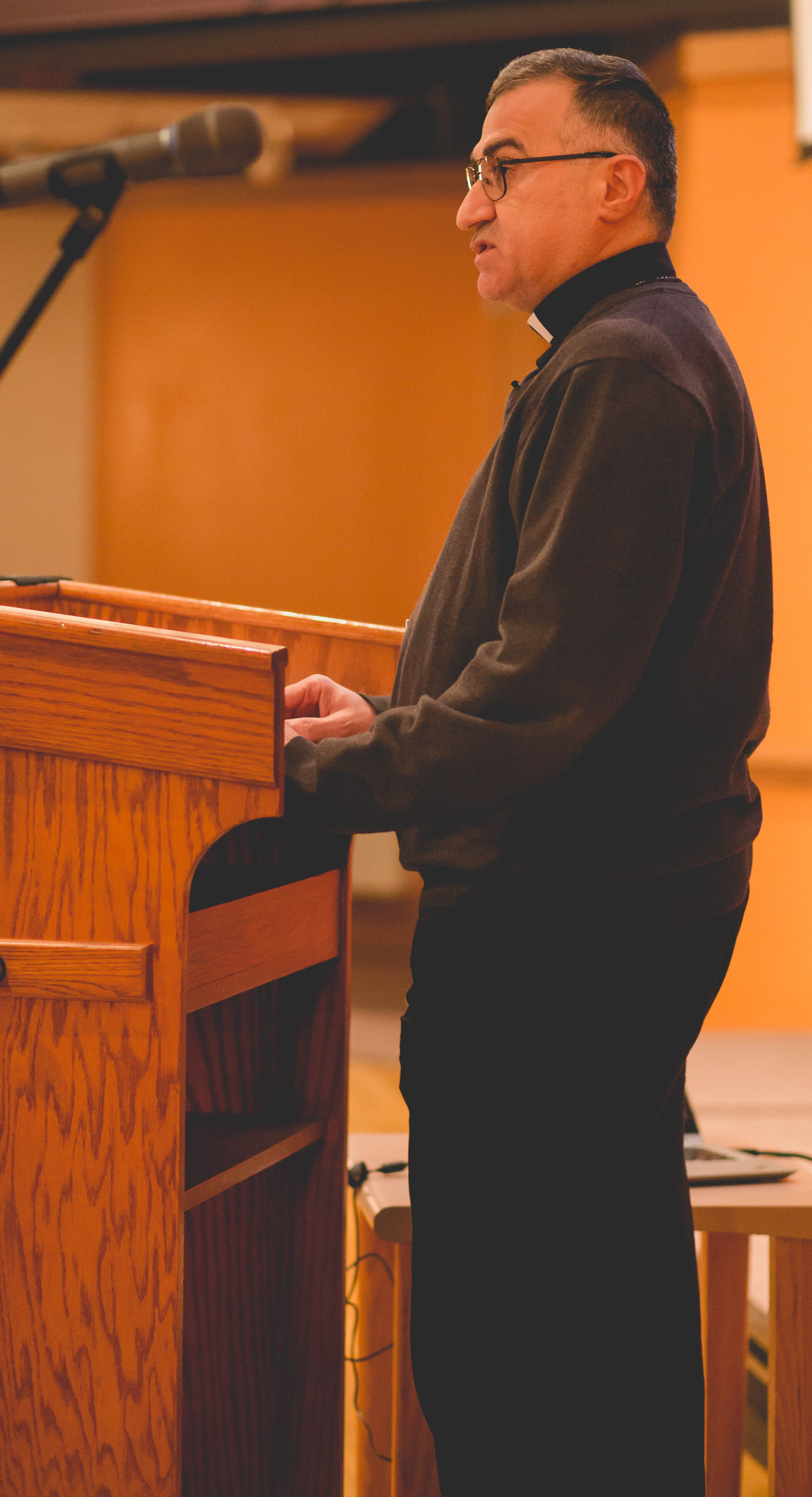 The Chaldean archbishop of Erbil, Iraq, asked the Franciscan University community for its help in building the future of the Catholic Church in Iraq during a speech Monday night at 7:30 p.m.

University students, faculty and administration filled both levels of the Gentile Gallery as the Most Rev. Bashar Matti Warda gave those assembled a call to action: help the persecuted Christians of the Middle East.

Warda spent a great part of his talk speaking to the resilience of the Iraqi faithful, who have undergone all sorts of persecution over the past several years due to the rise of the Islamic State group in the region. Warda said that the Islamic radicals have forced the area’s residents to either convert to Islam or face death. This has caused many Christians to flee to other areas in Iraq, including Warda’s own diocese of Erbil.

More than 125,000 Christians have been persecuted since the Islamic State began its rampage, said Warda, but despite being “scarred, battled and wounded,” the Christians are still strong in their faith.

“When a people has nothing left to lose, in some sense it is very liberating,” he said, adding later that “our faith grew stronger. … We found who we are really – we are Christians.”

Warda said that before the Islamic State persecutions began, Christians and Muslims have historically maintained a healthy “dialogue of life,” but Christians were often afraid to speak honestly about the problems with Muslims. Warda said that this is no longer the case.

“There is a crisis of violence in Islam, and for the sake of humanity, including the followers of Islam themselves, it must be addressed openly and honestly,” he said. “If there is to be any future for the Christians and religious minorities of Iraq and the Middle East, there must be a change and correction within Islam.”

Part of this honest dialogue comes from Christians living their lives as a witness to the “truth of forgiveness.” Warda called it a “vital missionary role” to provide a living example to the Muslims of a path to a world of forgiveness and peace.

So few Christians remain in Iraq – the numbers may seem small and insignificant – but the Christians are encouraged by the fact that the number of apostles was even smaller than that.

“Our faith is persecuted, but our churches are full,” the archbishop said.

Following Warda’s remarks, Edward Clancy of the Aid to the Church in Need organization, one of the talk’s co-sponsors, spoke to the crowd and said that there are ways university students can help in the mission of “rebuilding the Church where it was originally built.” Namely, Clancy said, this can be done through prayer, raising awareness and supporting them financially, but the main thing is “to not forget them.”

Clancy said that the archbishop is in the midst of starting the first Catholic university in the Middle East and that as a testimony to the spirit of Franciscan University, “this is where he wants to have his leaders formed.” In addition, there are opportunities for post-graduate work in Erbil for students to bring the talents and blessings of Franciscan to those persecuted Christians, he said.

Warda’s talk was well received by those in attendance and featured several outbursts of clapping throughout.

Sophomore John Mayer said, “It was inspiring to hear someone speak who is from a place on the front lines of red martyrdom in the world today.”

Mayer, grand knight for Franciscan’s Knights of Columbus council, came to Warda’s talk wearing the organization’s emblem and was able to connect with the archbishop because of the Knights of Columbus’ commitment to help persecuted Christians in need. Mayer said that the talk inspired him to see what ways his council can support those Middle East Christians in danger of persecution.