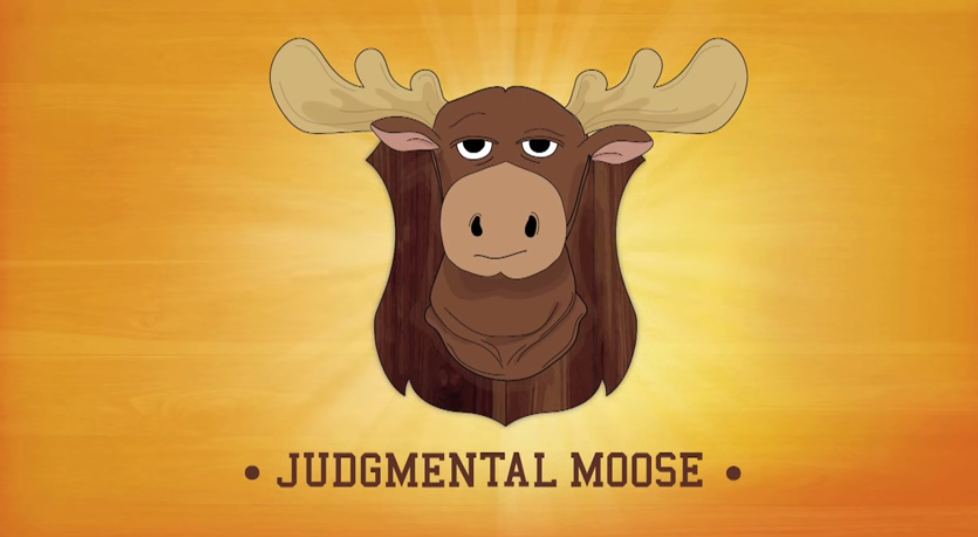 Richard put down the video game console and picked up his study material, much to the viewer’s approval. The catch? A “Judgmental Moose” told him to do so.

Judgmental Moose, one of the many witty creations of associate theology professor Bob Rice and of Franciscan University of Steubenville is a video series revolving around the seven deadly sins and is intended to promote group discussion. The series is produced by Video Catechism (VC).

Richard, a student of “EGAN HALL,” encounters a wall-mounted, talking moose head, and the discussions that follow highlight for viewers the dangers of the seven deadly sins. Although the premise might stir laughter, the ensuing discussion between ministers and adults or youth is engaging in nature.

Tim Wood, coordinator of adult engagement and marketing at Franciscan University, explained the video series at its base level as a conversation-starter.

“Richard encounters a moose, who has something to say about the choices he’s making,” said Wood. “The series is treating the seven deadly sins. And the premise is that there’s a mounted moose on the wall that talks to him.”

Each video comes complete with a discussion guide for use by minister, youth and adult alike, one meant to foster discussion of the meaning behind the video’s message. The seven Judgmental Moose uploads are each respectively focused on the seven deadly sins and their implications.

The videos themselves are available on the Steubenville Fuel website, a webpage cited by Wood for both its wide range of resources and its year-round relevance.

“These are pretty universal resources that we could use any time of year,” he said. “It’s all housed on our Steubenville Fuel website.”

Such resources include, “blogs, videos, podcasts, whatever the case may be,” said Wood.

All are uploaded with the intention to “keep the fire burning,” said Wood, and to be “‘fuel’ for your spiritual life.”

Also, the resources are uploaded free of charge, allowing the wide target audience full access to them.

Wood said, “This is absolutely free; it’s where we house all of those resources for all of our demographics. Our Fuel site has different pages for our different demographics: youth, young adult, adult and youth ministers.”

Although Wood said that Judgmental Moose is “quite a clever name for the series,” he acknowledged a faith connection meant to resonate with the audience and to delve deeper than the name itself.

He said, “It brings to the forefront, especially in this Lenten season, these seven deadly sins, and helping us to look at our own lives, and see, ‘What are the areas that we can improve?’”

This self-improvement can never be restricted to the participants of the retreat, he said.

Youth and adult ministers too, said Wood, by use of the videos could “witness the opposing virtues to the seven deadly sins,” in order that those to whom they minister can more easily emulate them.

Soon, fans of the Judgmental Moose series can expect another impactful series from the brains of Steubenville Fuel: the Ask J series. Wood said he expects its upload in the next few weeks.