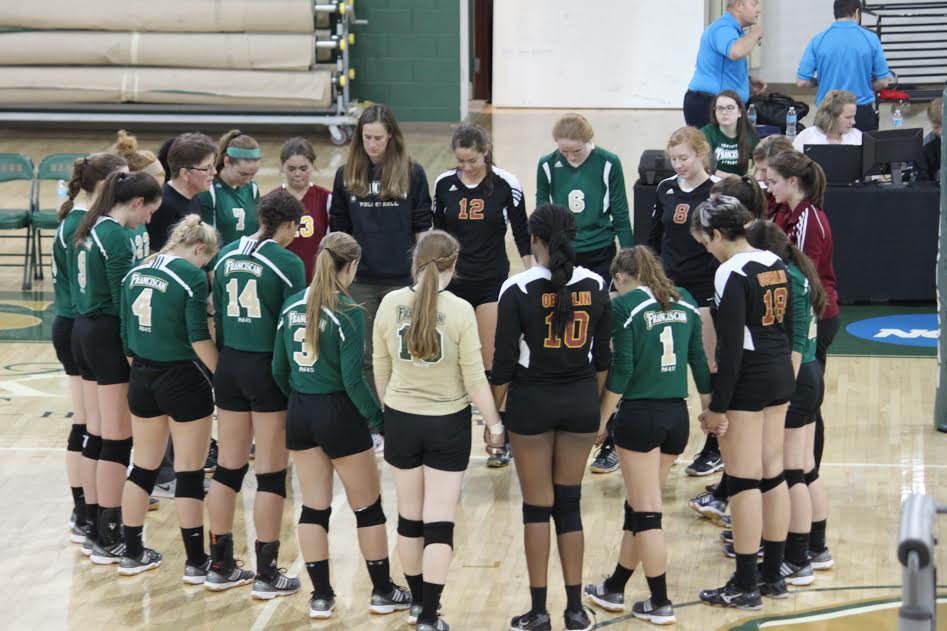 The Lady Barons started off strong, leading Oberlin the whole first set and ending with a score of 25-20. They lost their next two sets by scores of 13-25 and 18-25.

The fourth set started off roughly with Oberlin quickly scoring 4 points in the first few minutes, but after a time out calmed their nerves, the Lady Barons came back strong and won the set by a close score of 31-29, forcing the game into its fifth and final set.

Although the loss of the last set by 8-15 was disappointing to Head Coach Kelly Herrmann, she still saw this as a step in the right direction, saying that she was “very proud of the way the girls battled back in the fourth game. That was awesome.”

Herrmann saw inconsistency as the team’s biggest downfall, noting that in the sets they won, their hitting average was high, but in the ones they lost, it was very low. “We were just struggling in our serve receive, and we were too inconsistent at times to really get our hitters going,” she said. “That’s the key. You’ve got to pass well to hit well, and we were just too inconsistent.”

Despite the final outcome of the game, the girls had many strong plays throughout. Sophomore setter and right hitter Becca Haven and junior right and middle hitter Monica Rigaud had 8 kills each. “Offensively, Monica and Becca sort of carried the team,” said Herrmann.

Though the Lady Barons fell short of winning this hard-fought match, Friday’s game was not only about the score. This game was Franciscan’s first annual Armed Service night, and it began by honoring all service members, including the guest coach, Professor Ron Bolster.

“I just think it’s an important thing to do,” said Herrmann, “especially in our culture now, and especially because we all know and have so many military people in our families, our friends, our students.” Herrmann also said that they plan to make this night even better next year.

The Lady Barons’ next home conference game will be this Saturday, Oct. 22 at 7 p.m. against Penn State-Behrend.