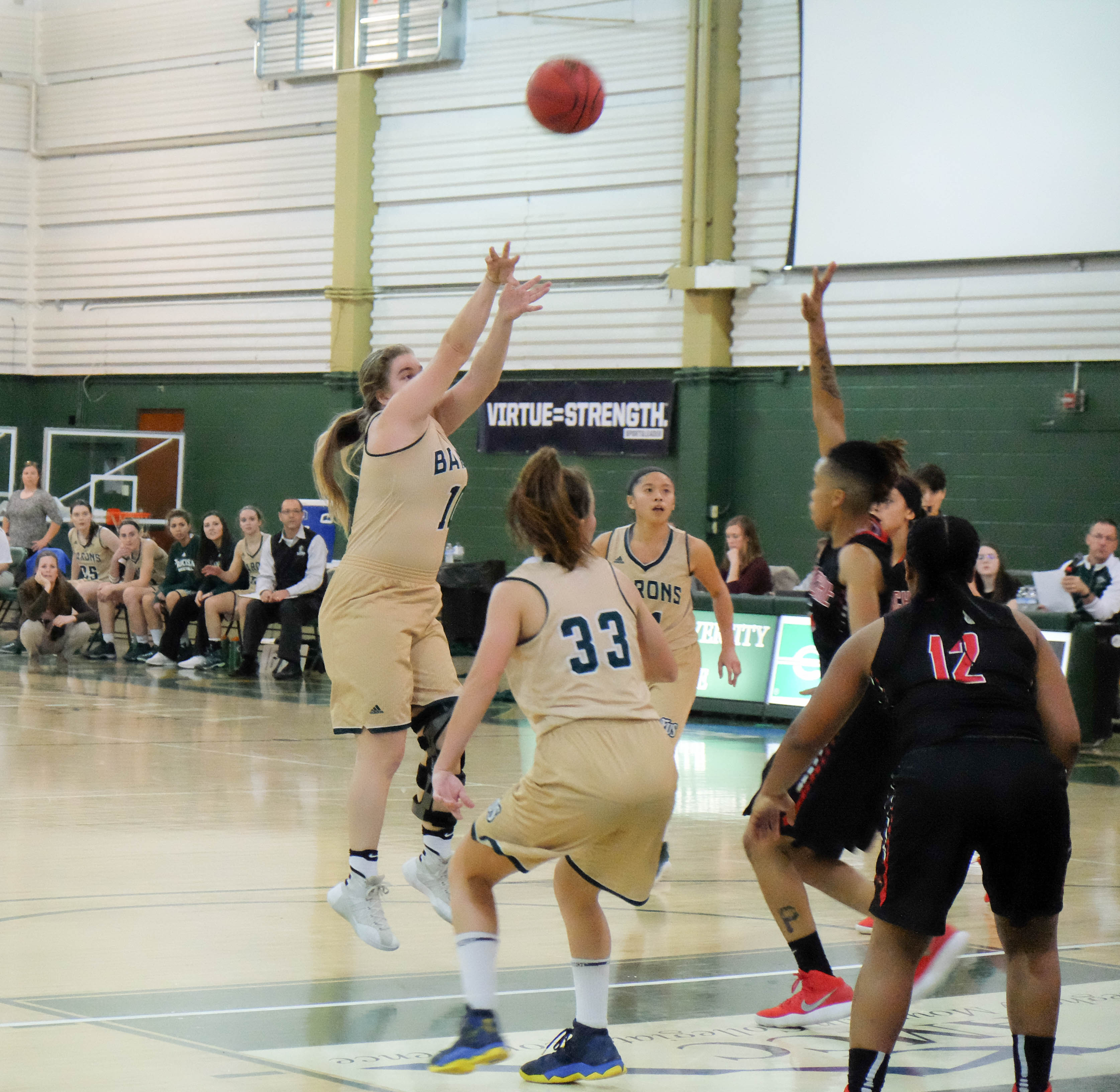 Competitive down the stretch, the Franciscan University women’s basketball team nevertheless dropped a closely contested conference showdown to the visiting La Roche Redhawks on Wednesday, by a score of 73-57.

Offensive opportunities presented themselves for the Lady Barons in the opening minutes; a made free throw from junior guard Gaby DeJesus and subsequent jump shot from sophomore guard Kaitlyn Sonneberger quickly provided the Lady Barons with a 3-0 lead. Freshman forward Laura Salzmann gave Franciscan back the lead after a 4-0 Redhawks run, with a picture-perfect layup in front of several La Roche defenders.

The score remained tight as the first quarter waned, both teams trading turnovers in what was early on largely a defensive affair. When the Redhawks landed a three-pointer, freshman guard Annie McGraw responded with a three of her own, a dagger from just beyond the arc. Two more DeJesus free throws and a jumper from sophomore forward Rose Judge put an 18-14 Franciscan lead into the books as the quarter ended.

After a La Roche layup within the opening seconds of the second quarter, more than two minutes would pass before another recorded point. The La Roche offense found rhythm with seven minutes left before halftime, registering back-to-back three-pointers, and an easy layup contributed by a steal from an inbounds pass.

Turnovers from the Lady Barons as the second quarter drew to a close limited scoring opportunities, although a McGraw stepback three-pointer and two DeJesus free throws lessened a once-dominant La Roche lead to a mere four points.

After a performance from the baton-twirling Clarice Orteza at halftime, the Lady Barons missed three successive shot opportunities to open the third quarter. Salzmann found room for a layup with eight minutes in the quarter, but a Redhawks three-pointer stretched their lead to seven. That lead would be nine by the time the quarter would end, with the La Roche Redhawks now up 51-42.

The fouth quarter opened with a series of La Roche substitutions before sophomore forward Cianna Vaughan notched a layup with 9:40 to go, cutting the Redhawks lead to eight. Sonneberger removed two more points from the team’s deficit with a layup of her own, but McGraw and Vaughan came short in subsequent scoring opportunities only minutes later.

After La Roche answered a McGraw three-pointer at 6:33 with a layup and successive jump shot from open space, the Lady Barons found themselves fighting to keep their deficit in single digits. Sophomore guard Kelsey Scott-Avery downed a three-pointer with 4:39 to go, lessening the margin to 10 points, but tight La Roche coverage limited further chances down the stretch.

A Sonneberger jump shot at the 2:19 mark would prove their final basket of the game, as the Redhawks closely guarded what became a 73-57 lead into the final buzzer. Both teams shot 40 percent from three, though La Roche outperformed Franciscan in both second chance points and points off turnovers.

The Lady Barons drop to 0-3 on the season, in their first conference matchup of the season thus far. After two early December away matchups, the women return home on Dec. 9, with a 4 p.m. tilt against conference opponent Pitt.-Bradford.