Lady Barons put up a fight against Bethany 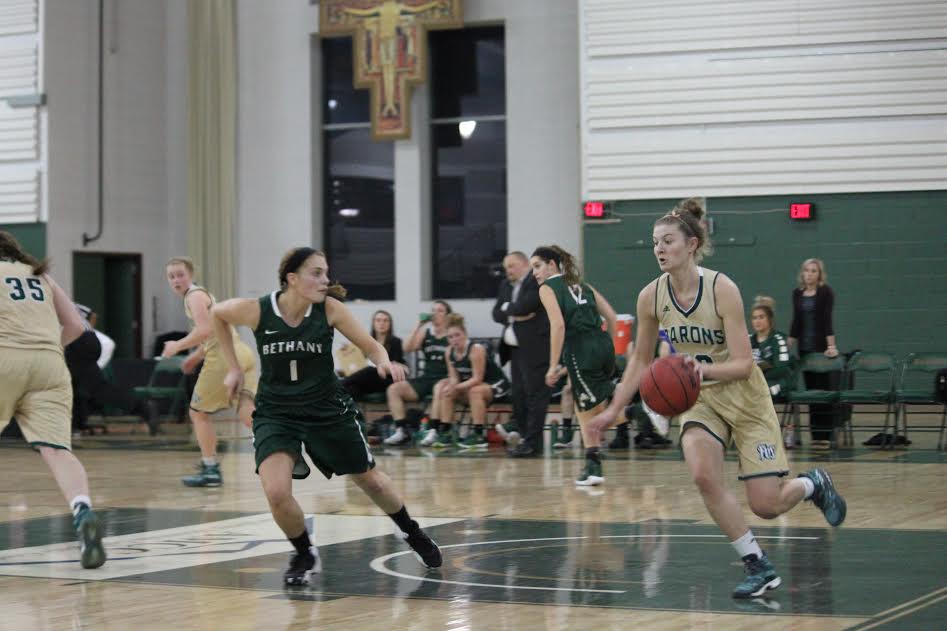 Bethany College scored the first six points of the game, off of two wide open 3-point looks. It was a lead that the Bethany Bisons protected for the duration of the game.

After their zone defense proved vulnerable to the 3-point shot in their previous matchup against Chatham University, the Lady Barons elected to change their defensive formation into a man-on-man approach, with mixed results.

Consistent ball movement from freshman point guard Kaitlyn Sonneberger kept the Lady Barons in the game. Midway through the second quarter, junior center Lucia Westrick went down with an injury, and her dominant interior presence was missed.

However, freshman guard Abby Baierl and sophomore guard Raegan Stead put up points late in the second quarter as Franciscan briefly led. Great coaching by fifth-year coach Suzy Delaney had her team trailing by only two at the half.

The Bethany College Bisons opened up an almost immediate 34-28 lead over the Lady Barons, before Sonneberger lessened their deficit with a mid-range jump shot. Sonneberger registered sixteen total points in thirty-seven active minutes.

The Bison opened up a double digit lead over the Lady Barons just seven seconds into the fourth quarter. That lead would extend to a 17-point discrepancy, as the penetration of the Bethany starting five began to wear down the defensive front of the Barons. Senior forward Johanna Roach fouled out in the quarter, and was replaced on the court by her sister, senior Bernadette Roach.

A layup by Bernadette Roach and two free throws by freshman forward Cianna Vaughan rounded out the night’s scoring for the Barons, who were outscored in the quarter by ten, 17-27.

Despite the loss, Head Coach Delaney said she was proud of her team’s efforts on the court. “Our young players really had to grow up in this game to keep us in it,” she said. “We just didn’t have enough in the tank at the end to make a final run.”

She also commented on the talent of her freshman point guard, Sonneberger: “(She) has answered the call. I’m really proud of how she fights in each and every possession.” Sonneberger led the Lady Barons in both points and rebounds on the night.

The Lady Barons fall to 0-3 on the year, and will next protect their home court against Penn State Behrend Dec. 3 at 2 p.m.