Lady Barons put up fight but fall to Pitt.-Bradford 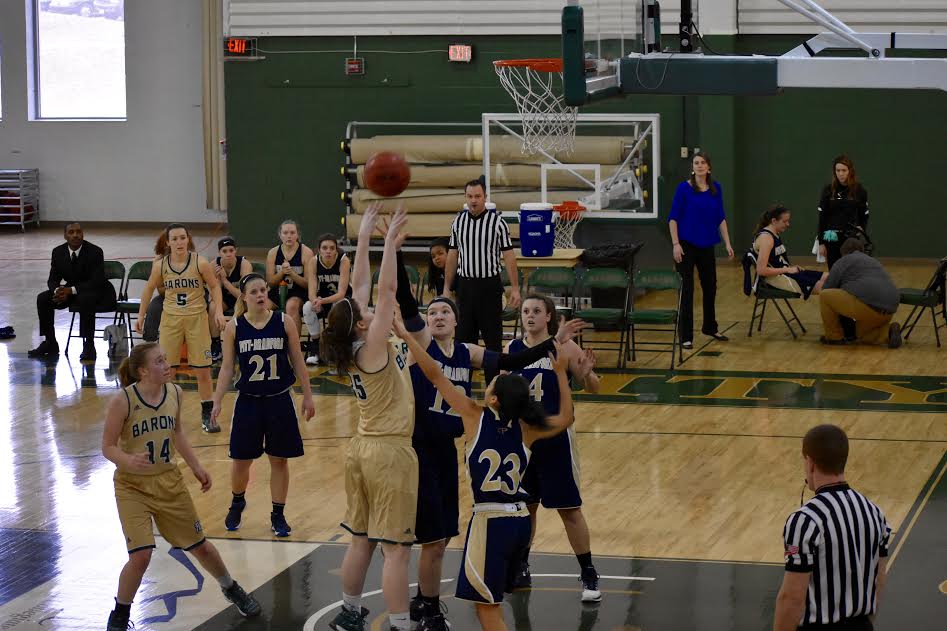 The Lady Barons put up a tough fight against the visiting Pitt.-Bradford on Saturday afternoon, but ultimately fell to the Panthers 81-66.

The Panthers took the lead 4-0 in the first quarter before freshman Abby Baierl made a three-point jump shot. The Panthers returned tallying up more points before senior Bernadette Roach and freshman Kaitlyn Sonneberger made layups, 17-7 in favor of the Panthers. The two teams continued to exchanges points, concluding the first quarter at 20-12.

In the second quarter, the Panthers were again the first to score and quickly rallied up 7 points  before junior Sarah Schriner made a free throw, 27-13. Schriner made two layups and freshman Cianna Vaugn made one, but the Panthers took seven more points.

Sonneberger made a free throw, 37-20, but the Panthers continued to tally points with free throws and jump shots.

The second quarter closed with the Lady Barons trailing 42-24. They came back to the court with a storm, answering to every Panther bucket. Baierl delivered a three-pointer. Franciscan shot 8-for-13 (61.5 percent) from the floor thanks to six points from both Baierl and Sonneberger. The third quarter closed 62-46.

In the final 10 minutes of the second half, Franciscan out-scored the Panthers 20-19. Thanks to  free throws from Baierl, the Panthers’ lead was cut down to 10, 72-62.  The Panthers responded in the last minutes of the game pushing the lead to 15 points with 1:07 left to play, 79-64. Both the Lady Barons and the Panthers scored two more points each, concluding the game 81-66.

The Lady Barons shot 40 percent for the day and was 12-18 from the free throw line. Baierl posted a career best of 20 points, while Sonneberger posted 15 points. Both players each had six boards as well.

The next Lady Barons home game will be at 6 p.m. Wednesday, Feb. 8 against the University of Pitt.-Greensburg.

2017-02-02
Previous Post: Barons fall to La Roche at home
Next Post: Addition in the J.C. to help students realize dignity